The Sounders put themselves in front of the Colorado Rapids 2-1 in the first leg of the MLS Western Conference finals Tuesday. Colorado’s 13th-minute road goal will complicate things. 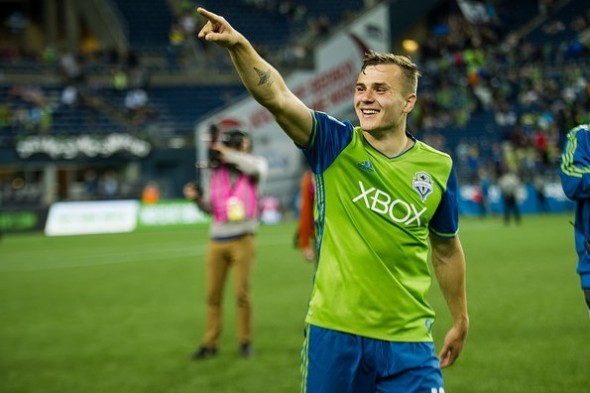 Thanks to a bizarre bounce and a controversial penalty, the Seattle Sounders took a 2-1 lead in the MLS Western Conference finals over the Colorado Rapids Tuesday evening at CenturyLink Field. Rainy conditions and a long break from play took some of the finesse out of a match filled with emotion as the Sounders put two past the stingiest defense in the league.

The score puts Seattle ahead on aggregate leading up to the second leg Sunday (1 p.m., ESPN). The result is not entirely to Colorado’s disadvantage. Since road goals are used as the primary tiebreaker on aggregate scoring, a 1-0 win Sunday would put the Rapids through to the MLS Cup on away goals.

Only a 2-1 Colorado win will force extra time, but the pressure on Seattle to score at altitude in Dick’s Sporting Goods Park, where the Rapids have only allowed seven goals all season, will be tremendous.

Seattle came in to the match knowing that getting goals past Colorado, who surrendered a league-low 32 goals during the regular season, would be like chipping through a boulder with a toothpick.

Chip they did, however, whittling away at Colorado’s defense with 22 open-play crosses, six corners and 15 shots.

Despite Seattle’s efforts, Colorado struck first. Jermaine Jones intercepted a pass in the 13th minute, sending a ball into the penalty area toward Shkelzen Gashi. Gashi let the ball run past him, however, where it found the feet of Kevin Doyle, whose shot deflected off Sounders center back Chad Marshall and left keeper Stefan Frei wrong-footed as it sailed into the net.

Seattle responded seven minutes later. Cristian Roldan tracked a ball out of the air and raced downfield, struggling to settle the high bounces on soaked turf. As the ball finally settled, Roldan took a shot from 20 yards in traffic that slammed into the left post while Colorado keeper Zac MacMath dove toward the ball.

The rebound fell straight to Jordan Morris, who converted the equalizer with his first touch to the delight of the 42,774 in attendance.

The Sounders added the second goal in the 61st minute, when Seattle midfielder Nicolas Lodeiro drew contact inside the penalty area and let his leg trail, causing Colorado’s Marc Burch, a former Sounder, to trip him. Referee Chris Penso pointed to the spot, and Lodeiro smashed his penalty to the upper right portion of the net while MacMath dove the other way to put Seattle on top.

Rapids head coach Pablo Mastroeni doubted that the contact was deserving of a penalty.

“Do you want to get me in trouble?” Mastroeni said, smiling. “It’s a big game and it’s unfortunate when the players don’t decide the result. But it’s football and it happens and that’s not going to be the focus (for the next game).”

The Sounders came up just short of scoring on two major opportunities. The first came in the 31st minute when a waist-high cross found striker Nelson Valdez for an attempted volley from six yards out. MacMath sprawled sideways, however, managing to turn aside Valdez’s point-blank effort.

Later, Lodeiro intercepted a badly misplayed pass in the 77th minute. As defenders rushed to recover, Lodeiro pulled up at the corner of the box and swung a curling shot toward the far side of the net, but his effort sailed just over the bar.

Either opportunity would have given Seattle a 3-1 lead on aggregate; a much greater mathematical and psychological advantage heading into the second leg.

Sounders head coach Brian Schmetzer didn’t bemoan the misses, though, saying that scoring goals against superior defenses was a matter of getting enough quality chances to have one break your way.

“I think it’s the cost of doing business,” Schmetzer said. “(There were) a lot of positives, and you can ask me that same question after the second leg if I’ll say, ‘What if?’”

After a two-week delay for international matches, the Sounders now have a four-day turnaround before playing a critical match at altitude. The Rapids are poised to attempt to grind out a 1-0 win, but Schmetzer reminded those in his press conference that Seattle has only failed to score once in the 13 games since he has taken charge.

The whittling continues, no time for what-ifs until the lights go out.