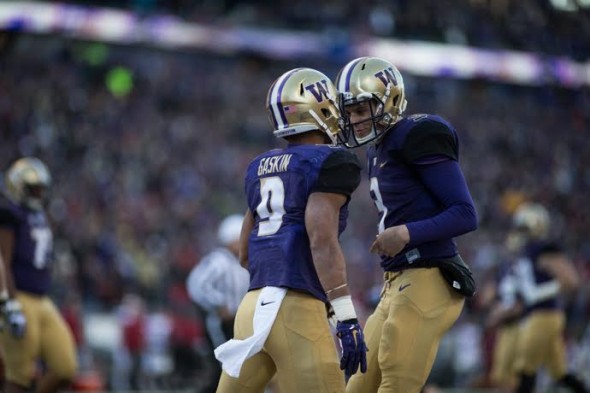 The 101st Apple Cup, foisted upon the public eight years ago this week, wasn’t so much a rivalry game as it was contest to determine which of the participants was the least horrible. Oddsmakers favored Washington by six, which normally would have prompted Washington State to file a formal complaint since the Huskies were 0-10 and hadn’t won in more than a year. Except . . . at 1-10, the Cougars hardly had reason to preen.

In the 17 team stat categories then maintained by the NCAA, Washington ranked 106th or lower in 15. WSU ranked 104th or lower in 14. It made for such epic badness that one Spokane wag suggested both programs deserved the death penalty.

Another thing: The Huskies and Cougars had been outscored by a combined 776-224.

Pressed during a pre-game press gaggle on the lameness of the 101st Apple Cup, Washington coach Tyrone Willingham had little to say, hardly a surprise since Willingham never really said anything even when he had something to say. But on Monday of game week he conjured up this quote from Dr. Martin Luther King: “When a man is called to be a street sweeper, he should sweep streets even as Michaelangelo painted.”

“Dogs bark, Cougars hunt and kill,” Wulff opined in the da Vinci moment of his time in Pullman.

Oddsmakers looked good at halftime, certainly better than Huskies and Cougars. With a 10-0 edge, Washington led for the first time in the 2008 season. But UW quarterback Ronnie Fouch couldn’t extend the good fortune. The Cougars rallied to force overtime, then forced a second one, and won 16-13 on a 37-yard field goal by Nico Grasu, who has yet to be inducted in the school’s athletic Hall of Fame.

So Washington managed only 13 points — and needed two overtimes to do it — against the first defense in college football history to allow more than 60 points four times in a season (66 to Cal, 63 to Oregon, 66 to Oregon State, 69 to USC).

Then, by losing to California 48-7 two weeks later, the Huskies finished 0-12, their first winless year since 1890. The Cougars failed to sustain their Apple Cup momentum, such as it was, dropping their finale to Hawaii 24-10 to finish 2-11.

Both programs seemed to have been swallowed by an inescapable black hole.

But no. Steve Sarkisian, who replaced Willingham, launched a faster-than-expected rebuild. When Sarkisian finally got the Huskies to nine wins in 2013, he cashed out and went to USC, setting up the Chris Petersen era. WSU stuck with Wulff for three more forgettable seasons before replacing him with Mike Leach, a perfect move for Pullman.

As the 109th Apple Cup nears (Friday, 12:30 PT, FOX), it is illuminating to view the arc the two schools have taken since that throwdown between uglies in 2008.

Washington from then to now

After a 5-7 first year in 2009, when UW fans began the chant, “Bark For Sark!” Sarkisian needed only two seasons to get the Huskies into a bowl game. No NCAA school ever went from 0-12 to a bowl game faster. Petersen, like Don James four decades earlier, needed three years to produce a nationally elite program.

The Cougars didn’t recover nearly as fast. It required four years for the Cougars to become bowl eligible (2013) and seven to finish with a winning record (9-4, 2015). This was their slog:

Washington State from then to now

The consensus seems to be that Apple Cup 109 could be the greatest ever contested. Washington is 10-1, WSU 8-3. Both are nationally ranked, UW sixth in the Associated Press poll, fifth in the coaches, WSU 23rd in both. The winner earns a spot in the Pac-12 title game in Santa Clara, CA Dec. 2.

The Huskies are again the favorite, ironically by the same spread – six points – with which they entered that brutal game in 2008.

The Huskies and Cougars have engaged 108 times since 1900, when the rivalry launched with a 5-5 tie at Athletic Park in Seattle, but have met only 36 times with both schools featurd more wins than losses. Since the first year it happened, 1907, there have been many corkers with much riding on the outcome, such as:

Of course, the game became the immortal “Snow Bowl” thanks to a near blizzard. Neither RB Napoleon Kaufman nor QB Mark Brunell of Washington could find traction on the snowy terrain. Kaufman ran for 51 yards, barely half his average, even with All-America OT Lincoln Kennedy blocking for him. Brunell completed 11 of 25 for a niggling 122 yards and had trouble locating receivers, especially TE Mark Bruener, amid the snowflakes.

But QB Drew Bledsoe (260 passing yards, two TDs), Shaumbe Wright-Fair (three TDs) and Philip Bobo found conditions ideal. Weeks away from becoming the No. 1 overall pick in the 1993 NFL draft, Bledsoe made the signature play of his college career, a 44-yard rainbow to Bobo, who caught the ball and slid face-first into a snow bank behind the end zone.

In case you’re wondering, Shakespeare’s The Tempest introduced the idea of past as prologue.