Thiel: Seahawks promote ex-WR to No. 3 back

Injuries hit hard the Seahawks running-back position. But it has given coach Pete Carroll an opportunity to again what he has done so often — give a free agent a shot who really wants it. 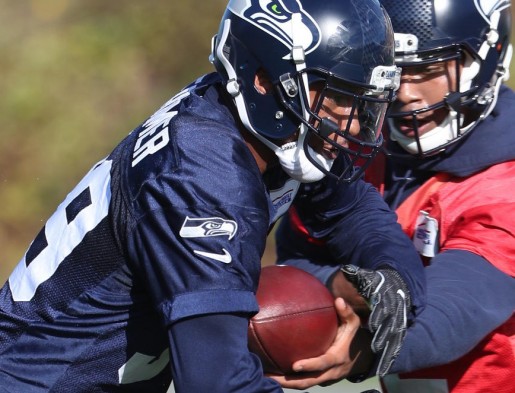 George Farmer will step from the margins in Tampa Sunday with the Seahawks. / Seahawks.com

When he was a sophomore at Junipero Serra High in Gardena, CA, George Farmer met USC coach Pete Carroll. By the time Farmer was a senior, he was the No. 1-rated wide receiver in the nation by Rivals.com, and Carroll was Seahawks coach.

Wednesday at team headquarters, Carroll finally hired his guy — as a third-string running back, after letting him go three previous times when he was identified as a receiver, then a cornerback.

“Life is unpredictable,” Farmer said matter-of-factly as he sat at his locker, reciting the wisdom of the ages. “You got to know how to weather adversity and overcome.

“It’s been quite a long journey.”

Farmer was promoted from the practice squad to the 53-man roster for Sunday’s game in Tampa against the 5-5 Bucs after injuries took down RBs C.J. Prosise (broken shoulder blade) and Troymaine Pope (ankle sprain). He will back up Thomas Rawls and rookie Alex Collins.

If the casualty rate keeps up, Farmer might get 25 carries for 100 yards.

Since Prosise and Pope remain on the roster, room was made for Farmer by cutting Tuesday RT J’Marcus Webb, the Seahawks’ most expensive free agent hire last off-season for a guaranteed $2.75 million over two years. Webb, who made three starts at right guard, was a six-year veteran who lived down to the tepid expectations of many around the NFL who puzzled over his signing by Seattle.

His departure means that the three O-line backups include two rookies, draftees G/T Rees Odhiambo and C Joey Hunt, and veteran Bradley Sowell. And the three running backs have a collective 49 carries this season (39 for Rawls).

That’s how the Seahawks roll. Experience is often secondary to talent, especially youthful talent. Beast Mode was then, the committee is now.

Farmer, 23,  has the talent — he ran a 10.4-second 100-meter dash in high school and was a five-star football recruit. Since then, however, chances have been fleeting. Check out this backstory:

His freshman year at USC, he had four games as a reserve running back. His sophomore year was mostly wiped out after, of all things, a serious bite from a brown recluse spider. Then his next season vanished after tears of the ACL and MCL in his right knee. After a junior season in which he had a modest 30 catches, 363 yards and four touchdowns, he declared for the draft.

He was signed as a free agent by the Cowboys, who cut him halfway through the preseason. The Seahawks signed him Aug. 22, 2015, thinking he was a cornerback. He lasted nine days. But the Seahawks brought him onto the practice squad Sept. 22.

At camp in July this year, the Seahawks made him into a running back after several injuries robbed the depth. He looked good in preseason, but the day before the final exhibition game, his foot was stepped on and he was waived/injured. He spent eight weeks in Los Angeles rehabbing the injury.

The Seahawks re-signed him to the practice squad Nov. 1, cut him Nov. 4, re-signed him Nov. 11 and promoted him Wednesday instead of finding a veteran free agent on the street.

Now he’s likely to get his first NFL game action Sunday. With that narrative, no wonder he seemed world-weary. Yet he’s resolute.

“Looking back, I wouldn’t change anything,” Farmer said. “Everything to this point has made me who I am. I’m pretty satisfied how things went.”

It had to have helped to have Carroll in his corner. Farmer’s promotion was completed after Carroll met with the media, but after practice, offensive coordinator Darrell Bevell explained it well.

“For a long time, Pete has been advocating for him,” he said. “When you see a guy that big (6-foot-1, 220 pounds), that strong and that fast, you feel like you should try to find a place for him.

“George is a very skilled athlete with great speed, great hands and an understanding of what we want to do. He’s been around us awhile, played bunch of scout (team) for us. It should be a seamless transition.

“We’re not scared to put him in there.”

That has become a Seahawks trademark: They are neither afraid to try, nor fail.

NFL personnel acquisition is an inexact craft, not close to an art and never a science. The inevitability of mistakes has never fazed Carroll nor general manager John Schneider. Seven years in Seattle has proven they are right way more than they are wrong.

After LT George Fant made it, Farmer becomes the 25th undrafted free agent on the 53-man roster, an NFL high. It isn’t clear to anyone yet that he will succeed, but if he doesn’t, the cause won’t be from an advanced sense of entitlement.

Wherever he is Thursday, George Farmer will be having one splendid Thanksgiving.