Snuffing Washington State’s prolific Air Raid offense three times inside the 10-yard line makes the Huskies defense the biggest winner in the Apple Cup. On to the championship game. 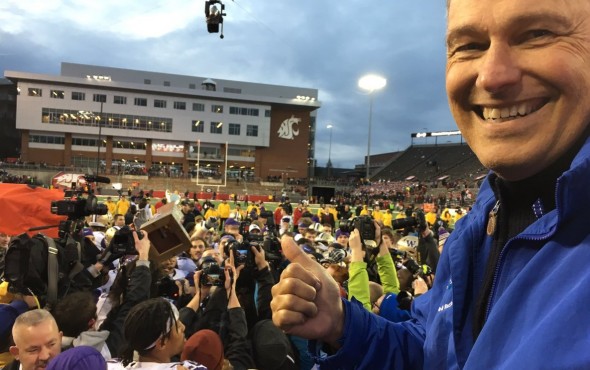 Gov. Jay Inslee happily sends off the Apple Cup trophy into a sea of Huskies players and fans Saturday afternoon at Martin Stadium. / Office of the Governor

As fast as Washington started Saturday, the Huskies were quicker to the immediate future.

“We’re far from finished on this whole thing,” said coach Chris Petersen. “The really big teams, they can finish.”

In many previous Apple Cups — hell, having both teams merely with winning records has happened only 36 times in 108 games — to finish would have meant concluding a season a cold Saturday in November, followed typically by a minor bowl (or no bowl) that was merely an exhibition to draw tourists to empty Sun Belt hotel rooms during the holidays.

This time, the fifth-ranked Huskies are one of those really big teams. They finished off 23rd-ranked Washington State in a surprisingly easy, 45-17 wire-to-wire dusting, then considered the possibility of finishing in up to three more games.

“We have a chance to do something that hasn’t been done in years here,” said WR John Ross. “I’ve never won anything like that. I’m really looking forward to that.”

Prevail at Levi’s Stadium, and the likelihood is high that they will be one of four teams chosen for the College Football Playoffs — heights unimaginable in 2008 when Washington lost the Apple Cup 16-13 on the same Martin Stadium turf to conclude an 0-12 season, the program’s nadir spanning parts of three centuries.

But in the past three years under Petersen, he has wrought magnum change to a flagging enterprise that in words, deeds and manner now resembles almost eerily the pinnacle reached nearly 25 years ago — the Huskies of the sainted Don James.

The 1991 national champions (such as they were declared back then, pre-CFP) were a defense-first cabal of NFL-ready talent coached by a man consumed by intense detail and preparedness. Like . . . now.

Given all the attention foisted upon offensive stars at Washington, calling the 2016 group defense-first may seem a stretch. But only if you missed the goal-line stands that twice thwarted the Cougars on fourth down, plus a Budda Baker interception that ended another WSU drive that reached the Washington nine-yard line.

“It was really awesome to see our defense swell up,” Petersen said of the goal-line stands. “They were having no part of that.”

As difficult as some say it is to defend the Air Raid offense of WSU coach Mike Leach, deep in the red zone things tend to come down to a brutal slugfest over the line of scrimmage. This season the Cougars ran for many more yards (1,605) that any previous WSU team under Leach, giving perhaps a false positive heading into the Apple Cup.

“They go for it a lot on fourth down,” Petersen said politely. “They also run the ball well inside the five. They score on everybody.”

In the second quarter down 28-3, yet giddy after a 64-yard punt return by Jamal Morrow  — the longest against Washington this season — the Cougars from a first-and-goal at the UW 6 tried four consecutive runs. The final three were by RB Gerald Wicks, finally denied at the 1 by Benning Potoa’e and D.J. Beavers.

Why Leach chose not to throw wasn’t apparent. But a similar circumstance happened in late the third quarter, with a similar result.

Down 35-17 and driving with a chance to make things interesting, WSU had a first-and-goal at the UW 4. Once, QB Luke Falk passed and failed; three times they ran and also failed, this time Baker supplying the critical fourth-down tackle on Wicks.

After the turnover on downs, the Huskies went 98 yards in seven plays to send the crimson-clad in the sellout crowd of 33,733 into the mild Palouse evening to contemplate whether to take their traditional shots of Jagermeister from 55-gallon drums.

“Had they scored there, it would have been a manageable game,” Petersen said. “To stop them was so big. Then to take the ball down the field was the key segment of the game.”

Senior WR Gabe Marks, who had 11 catches for 112 yards, used the word “soft” in discussing his teammates’ failures.

“I don’t know what that is, to stop a team (two) times on the 1-yard line,” Marks said to reporters. “I don’t know if they want it more than us. I don’t think that’s the case. It’s baffling.”

It may well be that the nation’s 10th-ranked scoring defense, despite the injury absences of LB Azeem Victor and DE Joe Mathis, is man-on-man tougher than the Cougars.

Still, at 8-4 with the school’s first eight-game win streak since 1930, the Cougars are doing a lot of things right under Leach. Just not in the Apple Cup, where the cumulative score in the past three UW wins is 121-40.

It is, as Petersen and his Seattle pro-team counterpart Pete Carroll like to say, all about the finish.

“The guys are getting a little attention,” Petersen said. “They like that.”