It’s going to look weird without No. 29 in the secondary for the Seahawks. FS Earl Thomas’s streak of 106 consecutive starts will end Sunday in Tampa. He has a strained hamstring. 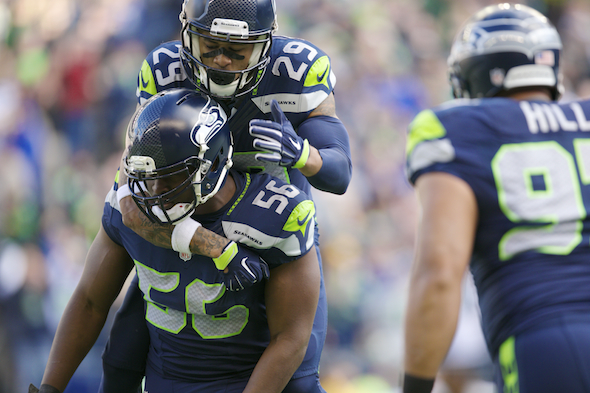 Earl Thomas (29) has a strained hamstring that will keep him out Sunday. / Drew McKenzie, Sportspress Northwest

FS Earl Thomas hasn’t been around quite as long as the Space Needle, but his shadow across the NFL has a similar length. For the first time since he entered the league in 2010, he won’t be there Sunday in Tampa when the Seahawks (7-2-1) play the Bucs (5-5).

After practice Friday, Thomas was downgraded from doubtful to out of the game, ending his streak of 106 consecutive starts — a club record for a defender — because of a hamstring strained in Sunday’s win over Philadelphia.

The three-time All-Pro free safety joins DE Michael Bennett on the sidelines for a game that shapes up as perhaps the toughest remaining foe in a schedule suddenly filled with down-sliders.

Steven Terrell, a four-year vet and mostly a special teams player, will get the start after playing the final quarter and a half when Thomas was injured, on the play in which teammate CB Richard Sherman intercepted Eagles QB Carson Wentz.

Terrell wil be staring down QB Jameis Winston, who has 12 touchdowns and two interceptions over his past six games.

Another starter who didn’t practice this week is C Justin Britt, perhaps the line’s steadiest player. He turned an ankle against the Eagles. Rookie Joey Hunt is the backup.

“He’s going to be a game-day decision,” said coach Pete Carroll.  “Joey has been getting all the work this week. He’s ready to go if we need him.

“Joey is a natural center in that he understands the position. He’s just been a really good player with a lot of background at it. He’s never had a problem doing anything we’ve asked him to do. If Joey does end up playing this week, I feel like we don’t have to change anything or adapt anything.”

Listed as questionable with the same kind of hamstring injury as Thomas was CB DeShawn Shead. Carroll said Shead looked good in a Friday workout. If he can’t go, CB Jeremy Lane will move from the nickel spot and CB Neiko Thorpe will fill in for Lane.

OLB Brock Coyle is listed as doubtful (foot), but Kevin Pierre-Louis, who had started previously, is ready to return.