The Seahawks fell behind 14-0 and never recovered as the offense, with three rookies in the offensive line, sputtered all game in a 14-5 loss at Tampa Bay. 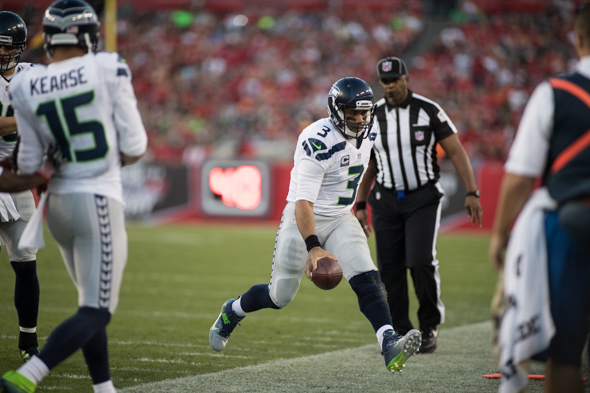 With two minutes to play in the first half Sunday at Raymond James Stadium, QB Russell Wilson had taken four sacks while completing two passes. He’d also been hit six times and hurried nine more. It appeared to be a developing calamity for the Seahawks. That’s precisely how it turned out, a 14-5 loss to Tampa Bay win in which Seattle was competitive only on the scoreboard (box).

The Buccaneers dominated. They scored touchdowns on their first two possessions, each a pass from James Winston star WR Mike Evans (3 and 23 yards). The Bucs’ defense never allowed Seattle to penetrate the 25-yard line, sacked Wilson a season-high six times and permitted conversions on only 1 of 11 third down attempts.

Missing four defensive starters, including FS Earl Thomas and DE Michael Bennett, and starting three rookies on the offensive line for the first time in franchise history, the Seahawks were ineffective offensively all game. Under relentless pressure, Wilson threw for 133 yards and was picked off twice. Had Wilson not scrambled for 80 yards on eight carries, the Seahawks would have had almost no offense.

The only good news for the Seahawks, who saw their three-game winning streak end: NFC West rivals Arizona, Los Angeles and San Francisco lost, enabling Seattle (7-3-1) to maintain a three-game lead over the Cardinals (4-6-1) in the division race.

Trailing 14-5 with 7:01 remaining, the Seahawks faced a third-and-7 from the Tampa Bay 27-yard line, still with time to pull out a win. Wilson hit TE Jimmy Graham with a five-yard pass over the middle to the Tampa 22, but Graham was upended and fumbled after the catch. The ball was recovered by Lavonte David, who returned it 53 yards to the Seattle 25-yard line.

Although SS Kam Chancellor ended that opportunity by intercepting Winston in the end zone with 3:21 to play, Seattle’s final drive ended with Wilson’s second pick, ensuring he  would not orchestrate the 22nd game-winning drive of his career.

Wilson completed 17 of 33 after going 3-for-8 for 20 yards, four sacks and a 6.2 passer rating in the first half. However, those 20 yards were negated by the 19 yards Wilson lost on sacks. Wilson finished with a 38.8 passer rating, second lowest of his career. He had a 38.7 rating against San Francisco in his rookie year of 2012.

Wilson also threw two interceptions in a game for the first time since Oct. 22, 2015 against San Francisco. He had thrown only two picks in 335 attempts this season entering Sunday. Wilson’s 80 yards rushing came after collecting a total of 79 in the first 10 games.

In the injury absence of rookie RB C.J. Prosise, Thomas Rawls had the bulk of Seattle’s carries and finished with 38 yards on 12 attempts.

Only twice in the Pete Carroll era — Nov. 7, 2010 vs. the New York Giants, and Nov. 15, 2015 against Arizona — did the Seahawks convert only one third-down attempt (they did convert one fourth-down play).

Seattle’s longest offensive play in the first half: a 29-yard pass interference penalty.

Three rookies started on the offensive line — C Joey Hunt, LT George Fant and RG Germain Ifedi — and the Buccaneers overwhelmed them. Fant was beaten twice for sacks in the first half by Noah Spence.

Points came on a second-quarter safety — Tampa’s Luke Stocker held DE Frank Clark in the end zone –and on a 43-yard field goal by Stephen Hauschka, also in the second quarter.

The Seahawks failed to record a sack, but had six tackles for loss and three hits on Winston, for all the good it did them.

Chancellor’s fourth-quarter interception was his second of the season and the 12th of his career.

“We’ve got to find ways to make plays and we will. Tampa Bay deserves all the credit. They played well. They had a great football game. We’ve got to convert on third down, that’s where a lot of the game is. You’ve got to stay on the field. So we’re looking forward to coming back swinging.” — Wilson

The Seahawks had an amazing streak snapped. Prior to Sunday, they had played 98 consecutive games with a lead in the fourth quarter or within one score of the lead. They were never closer than nine Sunday  . . . Seattle leads the all-time series with Tampa Bay 8-5 and is 18-11-1 in its past 30 road games dating to 2013 . . . Thomas started 106 consecutive regular season games and 12 postseason games before missing Sunday with a hamstring injury. Club record is 121 by OL Chris Gray  . . . DE Bennett missed his fifth consecutive game . . . The Seahawks also lost TE Luke Willson with a knee injury of undetermined severity.

The Seahawks return to Century Link Field Sunday to face the Carolina Panthers (5:30 p.m., NBC), the team that eliminated them from last year’s playoffs, now 4-7 after a 35-32 loss in Oakland Sunday.