Thiel: Inept Seahawks were out-coached, too

As Pete Carroll admitted, Seahawks were out-coached as well as out-played in Tampa. Getting away with three rookies on the offensive line went from dream to nightmare fast in the 14-5 defeat. 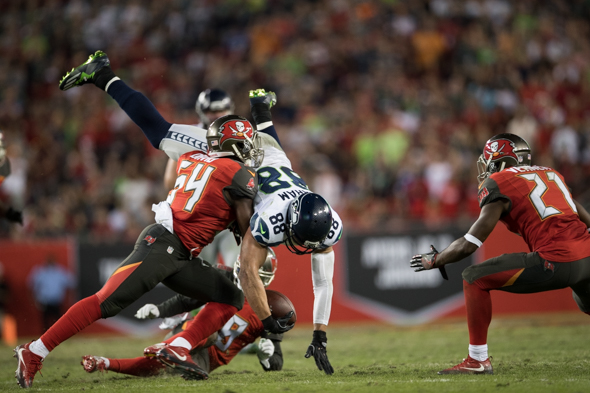 TE Jimmy Graham was upended after this fourth-quarter reception and fumbled the ball away to Tampa, ending Seattle’s best drive to that point. / Drew McKenzie, Seattle Post-Intelligencer

Time after time, the Seahawks under coach Pete Carroll have walked the tightrope with an undermanned offensive line. Sunday in Tampa Bay, the Wallendas of pro football went too far. Starting three rookies, including one making his NFL debut at center, is operating without a net.

They fell. Hard. By the meagerness of 14-5. The sensitive needed to look away.

The Tampa Bay coaching staff seemed to understand the Seahawks’ weakness better than the Seahawks coaches did. On many, if not most, snaps, the Bucs’ rush beat the Seahawks’ linemen almost instantly, daring QB Russell Wilson to try his short-pass game with defenders in the grills of Seahawks receivers from the snap.

Carroll owned up to the fact that he was out-coached, even if it was by first-year boss Dirk Koetter, whom Huskies fans may remember from six relatively undistinguished seasons coaching Arizona State. Koetter Sunday created a template that everyone in the NFL will try against Seattle until the Seahawks counter.

“We did not play like we play,” Carroll said. “That starts right with me. If everyone plays a little off, then that’s me. I got to do my part and they got to do their part.

“We got to get our game back and get a win again. It’s such an oddity to be that far off in the throwing game and  . . . fully shutting down on third down.”

The Seahawks converted their first third down (and a fourth down) on their last possession, when Wilson warmed up to complete five of seven passes before his second and final pick of the game. Prior to Sunday, he had two picks in 335 attempts for the season.

The Seahawks offense, 1 for 11 on third downs, mustered a single field goal after scoring in the previous three weeks 31, 31 and 26 points against defenses ranked higher than the Bucs’ outfit. The proximate cause would seem to be the substitution of rookie Joey Hunt at center for Justin Britt (sprained ankle), the only major personnel change.

But production was so bad that Britt would have to be in the running for league MVP, given the dropoff with his absence.

There may be a simpler explanation: Hunt, along with fellow rookies RG Germain Ifedi and LT George Fant, and “veterans” LG Mark Glowinski and RT Bradley Sowell, were physically beaten, time after time. It was startling to see a pass rush against the Seahawks be so overpowering simply by force of will.

Since camp, we’ve all known that the offensive line was the weakest link. But never was it so thoroughly pantsed. Even in the 6-6 tie with Arizona, Wilson was protected well enough to go 24 for 37 for 225 yards.

“They rushed the heck out of us,” Carroll said. “It wasn’t anyone in particular at all, but they did a really nice job. We didn’t protect like we needed to and they had six sacks. That’s just crazy because we haven’t been doing that at all.

“I can’t tell you how Joey did but we didn’t do very well up front. It wasn’t Joey’s issue at all.”

The suddenness and physicality of Tampa’s defense never let up. Nor did the Seahawks make second-half changes to play calls or protections. Only when Wilson put dread in the Bucs’ defense with a series of keepers on the read-option did things loosen up.

After Tampa’s offense staked out a 14-0 lead with long drives on the first two possessions, the Seahawks strategy of run-first behind RB Thomas Rawls faded quickly.

For one of the few times in his career, pressure far more often seemed to affect Wilson’s accuracy and timing. Besides six sacks, he was hit 11 other times, so the case for the yips is made. On the occasions when Wilson had time, he flat-out missed throws he usually makes. That’s how he ended up with a QB rating of 38.8, lowest since a game in his rookie year.

There is no external personnel solution. They fired veteran J’Marcus Webb during the week and made the conscious decision to go with four rookies among the eight OL spots. They even benched RT Garry Gilliam Sunday, giving most of the snaps to Sowell, who was beaten out at left tackle by Fant, who hadn’t played much football since eighth grade.

Britt, Mr. MVP, almost made it back Sunday, but was held out in hopes he can play at home against fading Carolina (4-7). His return will help restore a little order.

The other factor that may help is that whatever smugness may have developed with three wins in a row has been knocked back to midseason 2015.

Even before the game, the trip to improving Tampa looked to be the toughest remaining game on the Seahawks’ relatively manageable schedule. So a loss is hardly shocking, especially with injuries on both sides of the ball.

But the way they whimpered about . . .

“The main thing,” Carroll said, “was to admit that this was not the way we want to play.”

Actually, that would be the minimum thing. As the Wallendas might advise, working without a net works until it doesn’t.