A 56th-minute goal by Jordan Morris stunned the Rapids, undefeated at home this season, and sent Seattle on to its first appearance in the MLS Cup after a season of tumult and despair. 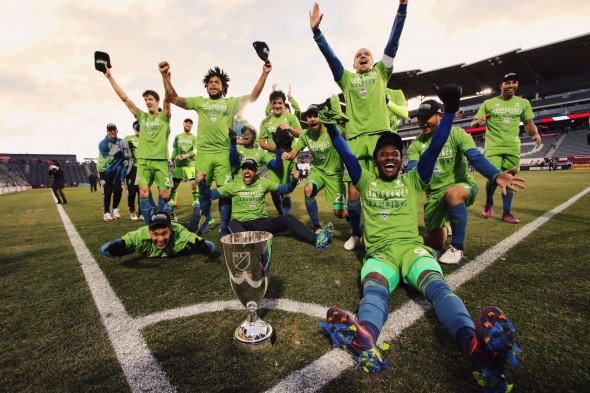 After seven seasons and as many playoff opportunities, the Sounders are bound for the MLS Cup. Seattle dealt the Colorado Rapids their first home loss of the season in the second leg of the Western Conference Finals, 1-0 Sunday and 3-1 on aggregate, a remarkable feat in a season defined by improbable tranformation.

When the clock ran out, the Sounders celebrated with fans who traveled, raising the Western Conference trophy for the first time in club history. Now, they will play for the MLS Cup and complete the turnaround of their worst half-season in club history.

Brian Schmetzer, never one to look beyond the moment at hand, allowed himself a try at  context.

“The significance of this, is that it’s now,” the first-year head coach and longtime Seattleite said. “We’re creating these moments now. The moment that we’ve created for the 200-plus fans that drove or flew on a holiday weekend to Colorado, for the 40,000 we have every weekend in Seattle, it’s significant.

“It’s significant to the fans that were watching us back in Memorial Stadium in the 1970s. It is significant. It’s another chapter, but we’re not finished yet. We have to make sure that all of this culminates with something really big, that people will talk about for many years.”

The big moment for Seattle is Dec. 10 against the winner of the Montreal-Toronto Eastern Conference final at 4 p.m. PT Wednesday. If Montreal, which holds a 3-2 aggregate lead after the first leg, wins, Seattle will have the chance to win the MLS Cup in front of a home crowd in the Emerald City because of the Sounders’ 1-0 win in Seattle April 2. A Toronto triumph means a trip to Canada.

Reaching the final after the Sounders sank as low as they did at midseason induces head-scratching incredulity.

The loss was the last straw for Sigi Schmid, the only coach the club had known in the MLS era, and the league’s all-time winningest coach, who was fired.

In stepped Schmetzer in an interim role, seeking to salvage the team’s dignity. Bolstered by the addition of Uruguayan midfielder Nicolas Lodeiro and the healthy return of Panamanian center back Roman Torres, Schmetzer did much more than that, helping the club weave its way to the playoffs.

The team finished 8-2-4, making the most of Lodeiro’s four goals and eight assists to earn a spot in the knockout round of the postseason.

After knocking out the Kansas City team that had embarrassed them in July, the Sounders used a 3-0 advantage from the first leg to advance past top-seeded FC Dallas in the semifinal for a shot at the No. 2 seed, Colorado. The Rapids were 11-0-6 at home during the regular season and conceded the fewest goals in the league.

Seattle had a 2-1 lead from the first leg, meaning that all they had to do was draw with the Rapids in the thinner air and the cold of Dick’s Sporting Goods Park. The Rapids tested the Sounders in the first half, controlling 60 percent of the possession and smashing 11 shots toward keeper Stefan Frei, though none was on target.

The goal came just when Seattle’s defense started to flag against Colorado’s onslaught. In the 56th minute after a midfield Colorado turnover, striker Nelson Valdez trapped a ball with his chest and spun toward the net with a defender in pursuit. He poked the ball toward Jordan Morris, who found space in Colorado’s back line.

Morris had had a bad week. In the days before the match, the forward had a stomach flu bug, and was still rehabbing a hamstring strained during the conference semifinals.

But he ignored the health problems and pursued the ball as keeper Zac MacMath came out to challenge him. Morris chipped with his right foot just before colliding with MacMath, and the ball bounced into the net as Morris grabbed his right knee in pain.

Stepping away from the jubilation in the locker room. Morris reflected on the changes since July.

“It’s definitely a rollercoaster,” he said. “It’s funny, looking back. This team always believed that we were good enough to make it. We want to do it for us, do it for fans, and we did it.”

Morris was not the only Sounder to spend time down in the second half. Several players spent extended time on the ground after the club had taken the lead, milking the clock as the home team grew increasingly desperate to score.

Whether some the Sounders’ pain was genuine or theatrics, Osvaldo Alonso was lost for the final 16 minutes when the Cuban defensive midfielder came out after a left knee sprain.

The Rapids were thwarted in front of goal by a hard-nosed defensive performance featuring stellar minutes from Torres, who had recently returned from injury. Torres figured in a number of blocked shots, dispossessions and deflected crosses.

“It wasn’t our prettiest game, for our part.,” the goalkeeper said. “They had a lot of possession, but they didn’t have too many shots on frame. (It was important) for us to come here, and play defensive football.

“We find ourselves in the final. Very important to bend but not break.”

The Sounders also benefited from a non-call in the 66th minute. Center back Chad Marshall slid to the ground to block a shot, but the ball struck his outstretched arm behind his body after hitting his legs. Rapids players screamed for a penalty, but referee Ricardo Salazar waved for play to continue.

Seattle’s defense kept the Rapids from recording any shots on target over 90 minutes. As the game dragged on, Seattle packed greater numbers behind the ball, daring Colorado to break down its defense as it clung to a two-goal aggregate lead.

As time ran out, the Sounders reached the threshold of the feat done a year earlier by rival Portland — becoming the best team in North America.