The Seahawks put up a brave front after losing to Tampa Bay Sunday and vowed to rectify their issues, which were numerous, especially in a historically bad passing performance. 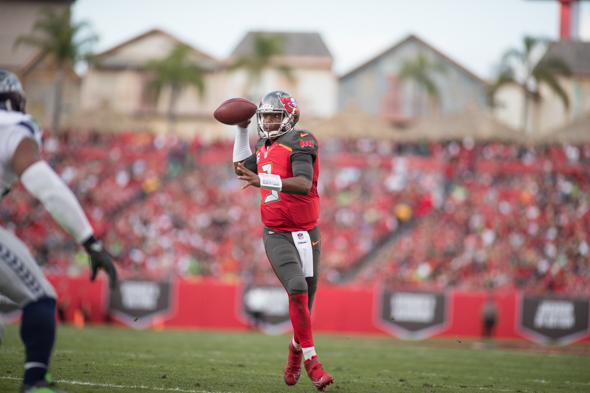 The Seahawks wore their bravest faces after laying a Haystack Rock-sized egg Sunday in Tampa Bay. The score – 14-5, Buccaneers – was palatable, the details indigestion-inducing. Seattle generated next-to-no offense, couldn’t protect QB Russell Wilson (six sacks), who experienced one of the worst passing games of his five-year career, and was made to look the fool defensively, especially in the first half.

“They outplayed us, and they beat us up front,” said coach Pete Carroll after the Seahawks played their third game this season without an offensive touchdown. “It’s such an oddity to be that far off in the throwing game and have trouble and (getting) fully shut down on third down. It just spells for a bad game.”

LB K.J. Wright: “We were in a funk throughout the game. It happens sometimes. We’ve got to find a way to stay focused, lock in and find a way to win.”

Tampa Bay bulldozed the Seahawks early. The Buccaneers scored two touchdowns, both passes from second-year QB Jameis Winston to WR Mike Evans, among their first 19 plays and led 14-0 as Seattle responded with a single three-and-out.

This was how unusual that was: Never in the Carroll era (since 2010) had an opposing quarterback — not Tom Brady, Aaron Rodgers, Peyton Manning or Drew Brees —  thrown two touchdown passes against the Seahawks in the first quarter.

Going back 20 years, only six quarterbacks besides Winston hit two TD throws against a Seattle team in the first quarter:

“He made some unorthodox throws. He also made some throws that we should have capitalized on,” CB Richard Sherman said of Winston, who completed 21 of 28 and finished with a 106.3 passer rating. “It wasn’t like there were any big bombs over the middle of the field or anything. Our tackling was good. They got a couple (touchdown passes) in the first quarter and they didn’t get another.”

True, but the damage was done because the Seahawks could not retaliate. they blew the majority of their drives on third down. They went 1-for-11, the 9.1 percent conversion rate the second-lowest of the Carroll era and one of the six lowest in the past decade:

The Seahawks are converting 35 percent of their third-down opportunities this year, which ranks 25th in the NFL. Since Carroll has been the coach, the only year when their conversion rate was lower was 2011 when, with Tarvaris Jackson at quarterback, their number was 33.8 percent.

Since Wilson entered the NFL in 2012, he has been sacked five or more times in a game 20 times. Quarterbacks with the most such contests during Wilson’s time in the league:

Wilson and the Seahawks host the Carolina Panthers Sunday at 5:30 p.m. at CenturyLink Field. The last time Wilson saw the Panthers (Jan. 17, 2016), they sacked him five times for 41 yards in losses.