Pete Carroll grew sufficiently weary of question about the offensive line that he asked to move on. But when the line gave up 20 pressures and produced 3 points, it’s hard avoid to the room’s elephant. 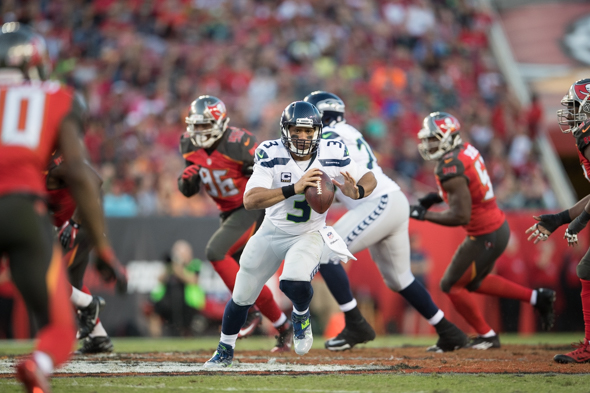 Coach Pete Carroll claims Sunday’s loss in Tampa, as gruesome a defeat as the Seahawks have had at least since 2012, was a one-time collection of mishaps, and not a sign of long-term failure of empire.

“I don’t think this is a trend, or a turn in the wrong direction or any of that kind of stuff,” he said at his weekly post-mortem Monday at team headquarters. “I think we had a bad outing, but we’re going to get right this week and get back at it.”

Naturally, Carroll was peppered with questions about the offensive line, primary source of the debacle that kept the offense touchdown-free for a third time this season, thanks in part to giving up six sacks (and 11 hits) on QB Russell Wilson. After about the sixth question, Carroll  looked at his interrogators and said politely, “Next question.”

Not surprising he wanted to get beyond it. According to Pro Football Focus, the line allowed 20 pressures, a brutal number.

In brief, here’s what Carroll said about each lineman, from left to right:

LT George Fant: “Had a hard time this game. He had a harder time, after last week playing really well. It was harder on him.” He allowed seven pressures.

C Joey Hunt, a rookie making his first start in the injury absence of Justin Britt: “I thought Joey did a nice job. He handled the fronts, handled the calls, run-blocked effectively, helped in pass protection. He was not at issue there. He held up his end of it.”

RT Bradley Sowell, who took every snap after starter Garry Gillliam was three-and-out on the first series: “Well, he played a lot of the game, so we got a good evaluation of him. He held up pretty well at the right side.” (Was the amount of snaps part of the plan?) “Kind of just happened that way.”

G/T Rees Odhiambo, a rookie backup who didn’t play, so he can’t be blamed: “He’s shown us that he’s worthy (of playing tackle as well as guard). Sure, that is part of the plan. He will play more tackle.”

Other than to confirm that Britt will return from a sprained ankle, Carroll wouldn’t discuss whether a lineup change is in the works until after a week of practice that figures to be intense. He did cite two things that will get attention.

“We didn’t do the things we went into the game thinking was necessary,” Carroll said. “That was picking up their (stunts) and getting the football out.

“I really felt like we could have helped Russell and the protection more so by getting the ball out more quickly, like we generally do. We thought we were going to block these guys’ (stunts), and it didn’t work out quite well. We didn’t adapt as fast as I wish we would have.”

Seattle is a 6.5-point betting favorite to recover starting at 5:30 p.m. Sunday against failing Carolina (4-7), but two-game losing streaks aren’t unknown under Carroll. Starting with 2012, the Seahawks have dropped two in a row each year except for the Super Bowl title year of 2013. None have come so late, although in 2013 they lost two of three in December.

“This was game 11 for us, I think this was the first time we really felt like that” this season, he said. “I’m going to go with what we know and how we know to be. We’ll get this thing fixed and get back on track. I communicated that last night.”

Some reason for optimism resides in the return of several players to health, chief among them DE Michael Bennett who has missed four games games after arthroscopic surgery on his knee.

“He thinks he’s on, Carroll said. “We have to get all the clearances. Trainers think he’s in great shape and ready to go, so we’re counting on him playing. He’s very positive about it.”

CB DeShawn Shead (hamstring) was close to playing Sunday, and Carroll expects him back Sunday. He’s less certain about FS Earl Thomas’s hamstring . . . Another starter, OLB Mike Morgan (sports hernia), is back and figures to settle a spot that has churned through four starters in his absence . . .Rookie RB Troymaine Pope has a chance to return from a sprained ankle . . .TE Luke Willson has a sprained knee and newcomer DT Damontre Moore has a sore foot that forced FB Will Tukuafu back to defense for three plays.