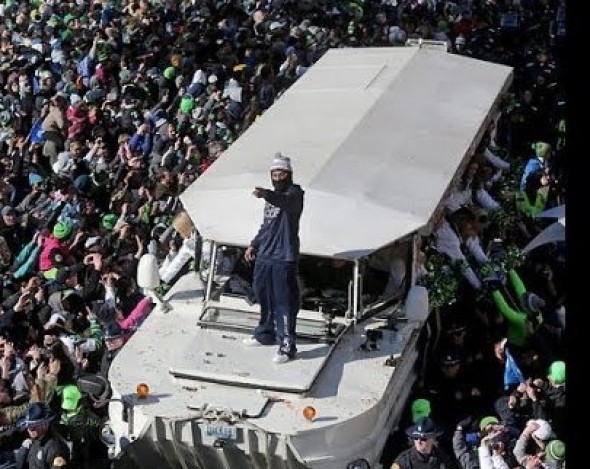 I wrote the headline above hesitantly. I had never put the words together before, so it seemed foreign, in a learning-Mandarin kind of way. But I had to try it out because training is necessary in any venture to the frontier of human experience.

Imagining Seattle as a city of sports champions feels as awkward as putting the first jeans on Smokey the Bear. How is it possible?

But here we are, with Sounders and Huskies football, on the cusp of major pro championships in the same season for a region where sports bleakness used to go to die.

Look, I know some of you don’t consider soccer major in America, and others don’t consider the Huskies professional. But if you keep throwing asterisks at the idea until the Mariners win the World Series, you’re going to have a torn rotator cuff and zero fun.

The Sounders will play the winner of Wednesday night’s Montreal-Toronto match in the MLS Cup Dec. 10.

These heights are first ascents for both clubs.

It’s not the same scope as ending a 108-year World Series drought as did the Chicago Cubs. The Sounders have been in MLS existence only eight years, and in big-time college football, this is only the third year for playoffs; every “national title” awarded before 2014 was the guesswork of sportswriters, coaches and children throwing darts at fair balloons, because no game results decided the outcome.

Still, a championship is a championship, no matter the degree of deprivation that preceded it. At least the Sounders and Huskies have a brief local sports tradition to follow: If they are to ascend Mount Olympus and join the Greek gods, they must first smite a team from the Hades of Colorado.

You may recall the Seahawks began the ritual with a 43-8 thrash of the Denver Broncos in Super Bowl XLVIII.  The Sounders did the deed Sunday when they beat the Colorado Rapids a second time in the two-match series, 1-0 at altitude, 2-1 at sea level. In futbol, that is nearly the equivalent of 43-8. Following custom, then, the Huskies will bring asunder the Buffaloes to maintain the state’s mandatory moral hegemony over the devil state.

Of the potentially similar achievements, the Sounders’ deed may be more spectacular, owing to the fact that they were among the league’s worst teams at midseason before executing a 180-degree turn. They fired the coach, changed the lineup a bit and reached the pinnacle game in North American soccer.

For those long experienced in Seattle sports, the feat resembled what happened in 1977 when the Sonics fired coach Bob Hopkins after a 5-17 start. His successor, Lenny Wilkens, pushed the Sonics into the Finals. After losing, they returned again the next season to win Seattle’s first major sports championship.

The shot for ultimate success is better for the Sounders, because they need to win only one more game. Should Montreal win to advance Wednesday, the game would be in the wind-driven December sleet of the Clink in front of 60,000 fans (although the conditions may be a negligible factor since Canadians were long ago recognized as the inventors of bad weather).

After the Huskies win Friday,  they have potentially two more games, starting with the Dec. 31 Peach Bowl semifinal game in Atlanta, likely against the formidable Crimson Tide. Not only is the game in Southeastern Conference country, it is against what is considered, for all intents and purposes, the 33rd NFL franchise. Coach Nick Saban has been known for years as Nick Satan because he wins numerous games 666-3.

But if Washington should somehow prevail, it would advance to the CFP title game Jan. 9 in Tampa. Succeeding then, as the industry’s indisputable national champion, would set off celebratory fires that would burn through the overcast above Montlake, and allow coach Chris Petersen direct ascent into heaven, from where he would command a recount of the presidential election.

Or maybe not. I don’t know.

In these parts, we have no experience with college football national championships that climax other than with nasty catcalling via newspaper stories (remember Washington vs. Miami, 1991 “co-championship?”). Nor do we know how to do soccer championships except by watching videos of Barcelona or Buenos Aires being lit up.

But we could learn.

We do have some experience of gathering downtown on a frozen February day to engage in the world’s largest parka hug. Seemed to be a pleasant experience.

With a couple more tries, we should have it.

Seattle, city of . . . well, you know. Try it out quietly, among people comfortable with your eccentrism.