Toronto FC defeated the Montreal Impact in extra time in the second leg of the MLS Eastern Conference finals Wednesday. Toronto will host the Seattle Sounders Dec. 10 for the MLS Cup. 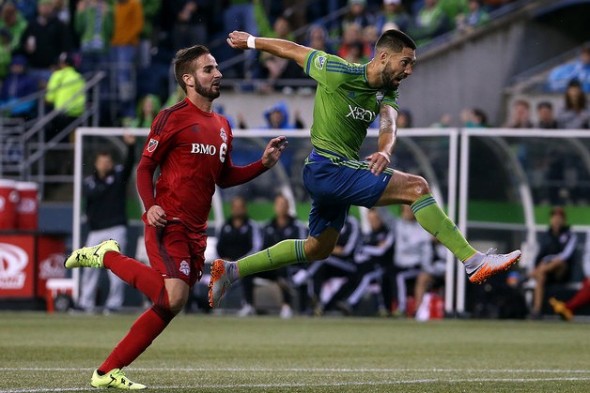 Homestanding Toronto FC scored two goals in two minutes of extra time to defeat the Montreal Impact Wednesday night in the MLS Eastern Conference finals, 7-5 on aggregate scoring. That means that Toronto will host the Seattle Sounders at BMO Field at 5 p.m. Dec. 10 in the MLS Cup.

Montreal struck first through Dominic Oduro in the 24th minute, giving Montreal a 4-2 aggregate lead after the 3-2 first leg Nov. 22. Toronto responded, scoring two goals from corner kicks before the end of the half to tie the aggregate score and swing the road-goals tiebreaker to their side.

A 53rd-minute toe poke from Ignacio Piatti in traffic that trickled into the net put Montreal back on top. Toronto answered through Nick Hagglund 15 minutes later to provide the 3-2 final to end regulation in a 5-5 aggregate tie, forcing overtime.

The decider came in the eighth minute. Steven Beitashour swung in a cross from the right alley, and Benoit Cheyrou met it with his head to put it away. Tosaint Ricketts punched in an insurance goal two minutes later, to the delight of the 36,000 in attendance.

The attendance figure was a record for BMO Field, made possible by the installation of temporary seating to accommodate demand. The two-match series was perhaps the most visible club soccer event in Canadian history. It attracted  101,004 attendees, and was a high-scoring, foul-tempered affair that will  further the rivalry between the clubs.

Seattle tied Toronto 1-1 during the regular season July 2. The Sounders scored less than a minute after conceding in the second half, Jordan Morris scoring. Seattle was  without Clint Dempsey, who was resting after playing in the Copa America for the USMNT.