Colorado QB Liufau a threat by land and air

A nephew of Cougars great Jack Thompson, Colorado’s Sefo Liufau is a bruising, 230-pound quarterback who loves running between the tackles, something the Huskies defense has not seen. 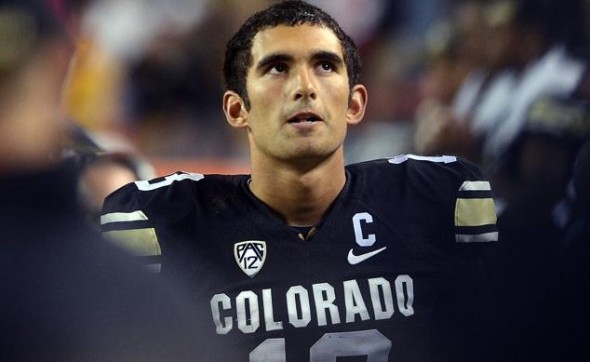 At 6-foot-4 and 230 pounds, QB Sefo Liufau is a greater threat as a runner than a passer. / Buffzone.com

Colorado QB Sefo Liufau comes from a strong Pac-12 Conference football tradition. His uncle, QB Jack Thompson, was the famed Throwin’ Samoan at Washington State, the most prolific passer in NCAA history through the 1970s. Now it is Liufau’s chance to turn heads with his nearly unique power style of play against Washington’s shutdown defense.

Liufau developed his toughness growing up in Tacoma. As early as age eight, Liufau tagged along to exercise with members of his father’s Army unit at Fort Lewis. Liufau told the Denver Post that while basketball with a bunch of soldiers was fine, paintballing turned out to be a poor choice. Their aim was good.

Liufau made the recruiting radar when he helped lead Bellarmine Prep to the 4A state championship game in 2012. From there, Liufau’s route led him to Boulder, where he took over the starting job early in his freshman season.

Toughness has defined Liufau’s time with the Buffaloes. Even some of his old exercise buddies might shake heads in disbelief at the punishment that Liufau takes, picking himself up from bone-jarring hits when he pulls the ball down to run between the tackles.

Over Liufau’s first three years, Colorado went 10-27. He missed the final two games of 2015 after fracturing his left foot in a loss to USC.

This year has held just as much physical punishment, but the sacrifice has been more worthwhile: A 10-2 record, the biggest single-season turnaround in NCAA football history. He was forced to exit an eventual loss to No. 5 Michigan with an ankle sprain, then missed two games while recovering, and had a one-series appearance in Colorado’s four-point loss to USC.

His return showed he hadn’t slowed a bit, building a six-game win streak that put the Buffs in the Pac-12 championship game Friday (6 p.m., FOX) in Santa Clara, CA.

In Colorado’s 38-24 win over Washington State, Liufau left the game after aggravating a hip injury. Once more, his toughness won out. The fans in Boulder chanted his name as he trotted out of the locker room to engineer a crucial fourth-quarter drive to seal the win.

Liufau is a competent, safe passer. He completes 64.6 percent of his throws, and has 2,150 yards and 11 passing touchdowns against three interceptions.

Where the 22-year-old’s game stands apart is his running ability. Liufau is the second- leading rushing quarterback in the Pac-12, behind Arizona’s Brandon Dawkins. Dawkins gave the Huskies defense trouble in their Sept. 24 matchup, rushing for 176 yards and two touchdowns in the Huskies’ narrow 35-28 win.

“This guy is more of a powerful runner than those other guys,” Kwiatkowski said Tuesday. “He jams it up in there, runs between the tackles. He’s not a guy that will go out on the edge. The runs are designed for him.

“He’s bigger. He’s physical. It’s going to be third-and-short, the ball is going to be in his hands. It’ll be down to him to make plays for them in the run game.”

He has the frame for it. At six-foot-four and 230 pounds, Liufau makes linebackers feel  they’re looking in a mirror.

“He’s almost like a fullback mixed with a quarterback,” Wooching said. “A lot of tenacity to push forward. (Stopping Liufau) is going take getting off blocks, making tackles as a pack. Not trying to do it yourself.”

Liufau’s will be a challenge for Washington’s front seven, particularly in short-yardage situations. In the Apple Cup, Washington came up with a pair of massive stops on fourth-and-goal, but will be hard pressed to drag down Liufau in a similar situation.

The Huskies are 6.5 point favorites to claim the Pac-12 crown (and like earn a berth in the College Football Playoffs field), but win or lose Liufau is likely to leave marks on Huskies tacklers.