Toronto trade a big save for Sounders’ Frei

Stefan Frei’s MLS career started well with Toronto FC. But after two seasons of almost no action, a 2013 trade to the Sounders gave the goalie exactly what he needed to flourish. 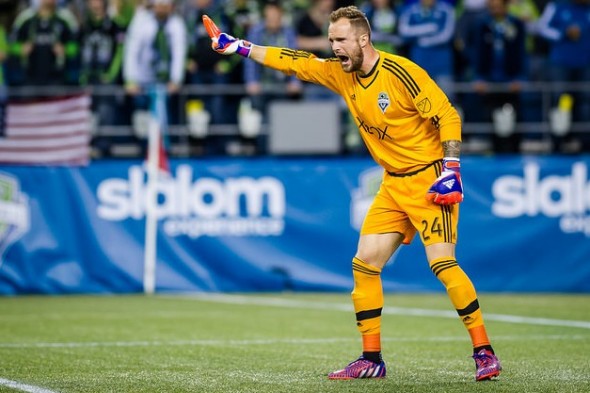 Stefan Frei doesn’t regret the way his time with Toronto FC ended. Ahead of his most meaningful clash to date with his former club — playing for the MLS Cup at BMO Field Dec. 10 (5 p.m., FOX) — Frei reflected on his time in Toronto and how he has changed since his trade to Seattle in 2013.

Coming out of his college career at Cal, Frei was named MVP of the 2009 MLS Combine. Toronto, which was preparing to play its first season in MLS, used its first-round draft pick on the young keeper to build a strong presence in the backfield.

Frei impressed in his rookie season, even if the team’s 9-9-7 record did not. Frei earned Toronto’s player of the month honors in April 2009, and earned four MLS Save of the Week awards.

In subsequent years, Toronto’s fortunes took a nosedive, but Frei continued to exceed expectations. As the team went 20-34-25 over its first three seasons, Frei posted 19 shutouts as the roster continued to spin like a Rubik’s Cube.

“It was a difficult time for me up there,” Frei said Thursday. “I was blessed coming out of college and getting some playing time right away. That’s so valuable for a goalkeeper to get experience.

“At the same time, you play soccer to win. We didn’t have too many triumphs when I was up there. Winning Canadian Cup was one nice thing, but other than that there wasn’t much there.”

The turnover, in particular, was an enemy to a stable environment.

“There was a lot of turnover,” Frei said. “Seven coaches in five years, about 200 teammates for me. It made for difficult times.”

In training camp in 2012, Frei fractured his tibia, ending his season with surgery. In 2013, a series of strong performances by GK Joe Bendik caused Ryan Nelsen, Frei’s seventh professional coach, to stick with the hot hand even after Frei recovered. Frei made one appearance in 2013.

After two years of inactivity, an off-season trade to Seattle breathed life into Frei’s career

“I think I grew (in Toronto) as much as I could,” Frei said. “It was probably for the best for me to move somewhere else and get a fresh start. Go to a place like Seattle that is pretty consistent, not just in terms of the lack of turnover, but also consistently one of the better teams. That’s helped me to calm down a bit and mature.”

At the time, Seattle was looking to replace Michael Gspurning after the club declined his contract option. Frei, still promising, had played one match in two years.

“The coaching staff here has helped me to grow tremendously,” he said. “That first year here was difficult, coming back after almost two years. Your confidence is a little bit in the gutter. You need people to keep on assuring you. That’s what I had here.”

Frei won the starting job and started all 34 games his first year. Bolstered by the acquisition of center back Chad Marshall from the Columbus Crew, Frei recorded a career-high nine shutouts and 20 wins as Seattle claimed the Supporters’ Shield.

Now, as he returns to his former home for the most important game of his career, Frei hopes the lessons he learned in Seattle will help set his team apart.