Washington couldn’t get much going in the passing game, but compensated in a myriad of ways and crushed Colorado to win the Pac-12 title Friday night in Santa Clara, CA. 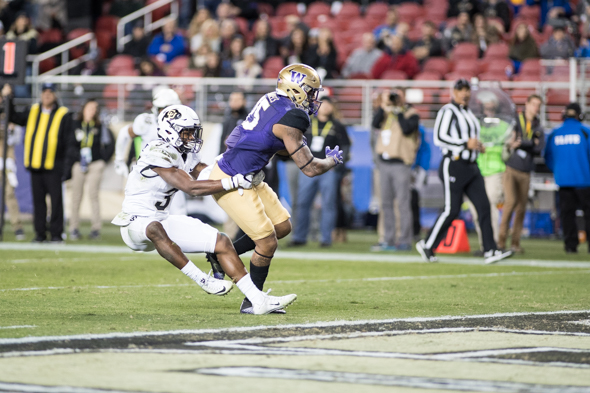 Jake Browning never could get his passing game going, but Washington more than compensated with a punishing running game, a highlight-reel play by WR John Ross and three game-breaking interceptions to overwhelm Colorado 41-10 Friday night in the Pac-12 Championship game at Levi’s Stadium in Santa Clara, CA (box). Unless protocol is stood on its head, Washington has played its way into the national semifinals.

The College Football Playoffs rankings committee, which slotted Washington at No. 4 earlier this week, will unveil the four teams that will compete for the national championship Sunday (9 a.m., ESPN). After the decisive win over No. 8 Colorado, it figures the Huskies will remain the No. 4 seed no matter what happens Saturday when No. 6 Wisconsin and No. 7 Penn State meet for the Big Ten title.

The Big Ten champ will have two losses no matter what, so the selection committee would have to jump a two-loss team over the one-loss Huskies, who padded their portfolio with a blowout win over a CFP Top 10 team.

The committee might look at the fact that Colorado played most of the first half with a backup freshman quarterback and all of the second with a starter, Sefo Liufau, essentially operating on one leg. It was a contributing factor Friday night since Liufau, a Tacoma native and Bellarmine Prep grad, is Colorado’s most dynamic player.

Still, the Huskies did what they needed to do, win big. That should send Washington (12-1), winner of its first conference championship since 2000, to the Peach Bowl in Atlanta Dec. 31 to face the likely No. 1 seed and defending national champion Alabama.

Used to putting up Heisman Trophy-type numbers, Browning struggled in the passing game (only 118 yards). But Myles Gaskin and Lavon Coleman more than took up the offensive slack, pounding for a combined 260 yards as the Huskies ran the ball 26 times among their first 33 offensive plays — a huge departure from previous games.

Ross caught only four passes and dropped a sure TD in the end zone. But he made the play of the game in the third quarter when Browning, about to get sacked, seemingly attempted to throw the ball out of bounds. It never got there. Ross leaped high, snagged it with one hand, juked a defender, and raced 19 yards for a touchdown that increased Washington’s lead to 31-7.

Even Browning seemed stunned, walking off the field shaking his head in amazement at Ross’s athleticism.

But the pivot point came courtesy of S Taylor Rapp, a true freshman from Bellingham,  who was named Pac-12 Freshman Defensive Player of the Year earlier this week.

With Washington leading 14-7, and Liufau back in the game after a first-qiuarter ankle injury, Rapp intercepted his first pass and returned it 35 yards for a touchdown. On Colorado’s next series, Rapp picked off another Liufau pass, setting up a 24-yard Cameron Van Winkle field goal.

The INTs (Liufau entered the game having thrown only three all season) extended Washington’s lead to 24-7. Rapp was named game MVP.

Browning completed only 9 of 24 (“Our pass game was awkward,” said Petersen) but threw two touchdowns, a 15-yarder to TE Darrell Daniels, then the Ross spectacle. Browning increased his season total to 42, one shy of Jared Goff’s (California) 2015 Pac-12 record.

Gaskin ran for 159 yards on 29 carries, his 14th career 100-yard rushing performance, and was named Washington’s offensive MVP. Coleman added 101 yards on 18 carries (38 on UW’s opening drive) and scored on a one-yard run that gave Washington a 7-0 lead. Gaskin and Coleman became UW’s first pair of 100-yard rushers since Nov. 23, 2013, when Bishop Sankey, Deontae Cooper and Dwayne Washington all topped the century mark vs. Oregon State.

Mainly due to its offensive line, Washington dominated the stats, amassing 383 yards (265 rushing) to Colorado’s 163. The Huskies converted eight of their 17 third-down attempts and didn’t commit a turnover.

Rapp’s pick six in the third quarter was the first for Washington since LB Connor O’Brien took an interception 46 yards for a touchdown Sept. 10 against Idaho. Rapp also had two interceptions against USC Nov. 12.

Ezekiel Turner, a junior from Pasadena, MD., had Washington’s third interception as the Huskies increased their season total to 19.

The Huskies notched one sack, by LB Psalm Wooching, and shut down Colorado’s passing attack, limiting Liufau and backup Steven Montez to a combined 8-for-25 for 81 yards. Colorado had no ground game, either, finishing with 82 yards.

“They play hard, they continue to get better each game and we are really proud of them. This is really a good football team. I think we belong in the playoffs, no doubt about that.” — Petersen.

“Coach Pete preached to us all year we could do it and we bought in. Give credit to our O-line. They did their thing tonight and, man, they were doing it. Now (whether UW will make the national playoffs) it’s up to a whole bunch of people I don’t know. Whatever this win puts us, it puts us.” — Gaskin

“This feels so amazing. I’ve been here four years and never come close to anything like this. We played a very good Colorado team and the message we got was to just keep fighting no matter what. I’m so proud to be a part of this.” — Ross

The College Football Playoffs rankings committee will choose the four national semifinalists Sunday. They will play in the Peach Bowl in Atlanta and Fiesta Bowl in Tempe on New Year’s Eve. Winners meet Jan. 9 in Tampa for the national championship.