Thiel: Huskies are champs, with more to come

A play of pure athletic improvisation highlighted Washington’s 41-10 romp over Colorado Friday night, a win in which the Huskies did everything required to make the CFP playoffs. 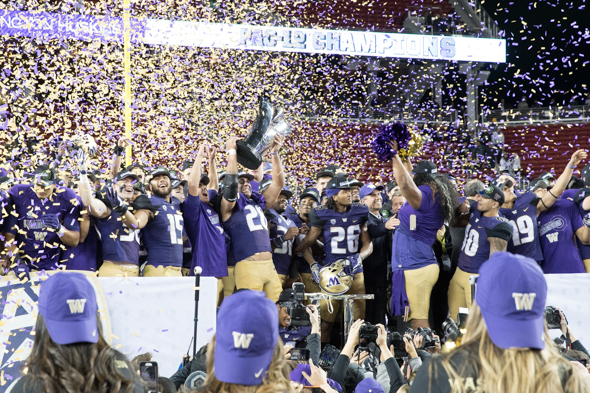 With the cxhampionship trophy held high, the Huskies celebrated their 41-10 triumph over Colorado at Levi’s Stadium. / Drew McKenzie, Sportspress Northwest

SANTA CLARA, CA — The play that sealed the Pac-12 Championship Friday night had nothing to do with good coaching or clever scheming or luck. It was pure athletic improvisation, which makes the Washington Huskies slightly scarier for the opponent they draw in the College Football Playoffs.

Ahead 24-7 in the third quarter, QB Jake Browning, amid a mediocre game for him, dropped back from the Colorado 19-yard line and had nothing. The Buffaloes’ premium linebacker, Jimmie Gilbert, broke free of his blocker and laid hands on Browning. Beginning an awkward throw from below his right knee before he fell over, Browning flung a duck toward the sideline, seeking an incompletion.

Instead, the incomparable WR John Ross, from a standing jump, speared the ball one-handed, clasped with two, and needed only half of his warp speed to tiptoe down the sidelines for the touchdown.

It should have been a sack. Or at least an incompletion. Instead, it began a giggle-fest among the 47,118 at Levi’s Stadium, an acknowledgement that they had gotten their money’s worth. At least, if they weren’t fans of the semi-helpless Buffs.

The Huskies? They received a trophy that rewarded a splendid 12-1 season with their first Pac-12 title since 2000 after a 41-10 thrashing of eighth-ranked Colorado.

The Huskies did everything required to make irrelevant the “very small” margin a CFP spokesman said Tuesday existed between No. 4 Washington and No. 5 Michigan, a  no-doubt rout that was executed despite an 9-for-24 passing day for Browning.

Somewhere in Ann Arbor, MI., a clipboard undoubtedly died a horrible death. Police are looking for a khaki-clad suspect with a red face.

The pullaway triumph left CFP committee with no wiggle room to deny Washington a berth in the playoffs. At the moment, Washington would play No. 1 Alabama in a semifinal Atlanta’s Peach Bowl Dec. 31. But the Crimson Tide has to play Florida Saturday for the SEC championship, and No. 3 Clemson has an ACC title game, too with, Virginia Tech.

All will be sorted at 9 a.m. Sunday when the committee announces the field. As far as RB Myles Gaskin is concerned, he could do without that nonsense.

That bureaucracy held no sway after the game amid the confetti and fireworks that celebrated a return to dominance for Washington that seemed far away until Petersen arrived.

As much as the Buffaloes rightfully should be celebrated for their one-year turnaround from 1-8 to 8-1 — the biggest flip in conference history —  Petersen is king of the West  Coast because it took him just three years after his hugely successful run at Boise State to resurrect the Huskies in his careful yet clever image.

“I have so much respect for this conference, and what types of coaches and players that we have,” he said. ” I don’t take for granted at all sitting up here” with the trophy.

Amid all the NFL-caliber talent on the Washington team, a freshman led them.

Safety Taylor Rapp, the precocious kid from Bellingham’s Sehome High School, held the Most Valuable Player trophy above his head on the post-game presentation platform as securely as he clutched two interceptions, one returned for a touchdown that broke open the game.

“Honestly, I didn’t see any of this coming,” Rapp said. “It’s so crazy and surreal. It felt l like a dream out there.”

He was part of a defense that suffocated the mistake-prone Buffs, held to 163 yards of offense, a season low as well as a Pac-12, championship-game low. The only other team the Huskies humbled as thoroughly was Portland State.

UW also temporarily knocked out of the game QB Sefo Liufau, the Buffs’ primary weapon, during a first-quarter sack by LB Psalm Wooching.

Liufau, from Tacoma’s Bellarmine Prep, had his sore leg wrapped at halftime and returned. But his first pass of the second half was tipped, then grabbed by Rapp, who scooted 35 yards with the pick-six to break open the game.

Asked if he knew that Liufau was limited, Rapp said, “The quarterback was out there.  Doesn’t matter to me. Play ball.”

The Huskies offense plodded through a first half leading 14-7 so awkwardly that a national reporter in the press box inquired of a Seattle reporter whether Browning was hurt.

No. He was waiting. While he waited, he handed the ball off to Gaskin (159 yards) and Lavon Coleman (107 yards). They were the first pair of backs to each top 100 yards in the championship game’s six-year history.

The rest of the night was up to the defense. They picked Liufau twice more to set up short fields so the Huskies didn’t have to rely on the passing game Petersen called “awkward.”

But if the Huskies had little going in the air, consider the Buffs: Besides the three picks, they completed seven of 22 passes for 76 yards.

A wild Colorado kickoff return in the third quarter that included a fumble recovery by RB Phillip Lindsay reached the Washington 2-yard line. As they have done several times season, the Huskies mustered a goal-line stand that forced Colorado to accept a field goal, thwarting any momentum it hadmomentarily from the return.

“The only thing to keep them in the game was to return the kickoff,” Petersen said. “When (opponents) get down there to the five, I always think, ‘I don’t know if they’re going to score.’ A lot of times, they don’t. That was the case again.”

Even when the Huskies are awkward, they have the defense and the raw talents like Browning and Ross. Those virtues can take a team a long ways past awkward, all the way to Atlanta for a New Year’s Eve party of a kind the Huskies football program has never experienced.