After Earl Thomas suffered a season-ending leg injury, the Seahawks rolled over Carolina 40-7 at CenturyLink Field, atoning for a bad showing in Tampa Bay. 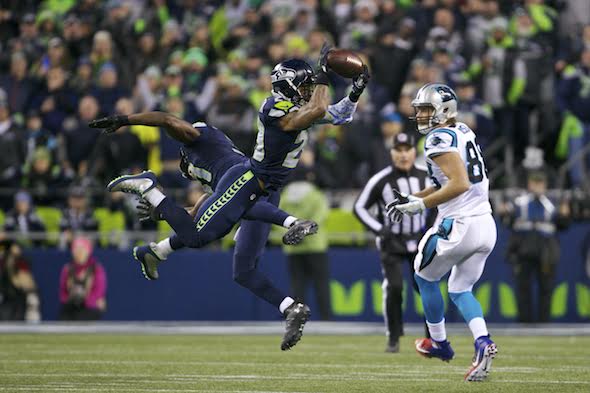 Earl Thomas barely missed an interception on a play that ended with the All-Pro safety breaking his leg in a collision with teammate SS Kam Chancellor. / Drew Sellers, Sportspress Northwest

Bouncing back from an inept performance at Tampa Bay last week, the Seahawks rolled the Carolina Panthers 40-7 Sunday night at CenturyLink Field (box). But they paid a big price as All-Pro FS  Earl Thomas in the first half fractured the tibia in his left leg, which will sideline him probably for the rest of the season. The injury so affected Thomas that he tweeted at halftime that retirement is an option, which was widely dismissed by teammates as the emotion of the moment.

“This game has been so good to me no regrets,” Thomas wrote. “A lot is running through my mind including retirement. Thanks for all the prayers.”

“He broke his leg,” said head coach Pete Carroll. “Right now, I don’t know what that means. It’s six weeks in any event. It’s gonna hurt. We don’t know right now he if will be back.”

The Seahawks led 10-7 when he collided with teammate SS Kam Chancellor while leaping for an interception. His absence didn’t halt Seattle’s momentum. The Seahawks raced to a 23-7 halftime lead as RB Thomas Rawls busted for 103 yards and a pair of touchdowns and Stephen Hauschka had three field goals.

The Seahawks amassed 534 yards of total offense, more than double the 245 they had in losing 14-5 at Tampa Bay a week ago. Most of that was due to a vastly improved performance by the offensive line, helped immeasurably by the return of C Justin Britt.

Seattle improved to 8-3-1 and maintained a three-game lead over the Arizona Cardinals (5-6-1) in the NFC West. Arizona defeated Washington 31-23 Sunday.

On Seattle’s first scrimmage play of the third quarter, Russell Wilson handed off to Tyler Lockett, who swept the right end, avoided stepping out of bounds, and raced 75 yards for a touchdown that staked Seattle to a 30-7 lead.

Wilson completed 26 of 36 for 277 yards with one TD ,one INT and a passer rating of 92.0 a week after posting a 38.8, second-worst of his career. Wilson also rushed for 29 yards on three carries. The Panthers sacked him three times.

Wilson has 54 wins, two shy of Matt Ryan’s NFL record of 56 for the most in the first five seasons of a career. He also improved to 33-5 at the Clink, most wins by a quarterback on his home field to begin a career (Baltimore’s Joe Flacco 32-5).

Used sparingly in the second half after successfully working his way through a late first-half concussion protocol, Rawls had 106 yards on 15 carries, 103 in the first half, including scoring runs of 8 and 45 yards — the first two-TD game of his career. Rawls became the first Seahawk runner with 90-plus yards rushing and two TDs in the first half of a game since Marshawn Lynch in week 13 of 2013 vs. Philadelphia.

Lockett, who caught five passes (on six targets) for 63  yards, also posted the longest TD run of the season for the Seahawks with his 75-yard, third-quarter burst. Previous high was 72 yards by  C.J. Prosise against the Philadelphia Eagles Nov. 20.

WR Doug Baldwin didn’t score, but caught all seven of his targets for 65 yards. WR Jermaine Kearse had five catches (seven targets) for 65 yards and TE Jimmy Graham six catches (nine targets) for 63. He snagged a one-yard TD from Wilson in the fourth quarter.

The Panthers held QB Cam Newton out of the opening series due to a dress-code violation (he failed to wear a necktie). The Panthers paid for Newton’s sartorial misdeed when Derek Anderson got the start and was intercepted on his first play by OLB Mike Morgan, in his first game in eight weeks. Seattle responded with a field goal and the rout was on.

The Seahawks held the Panthers to 271 yards, including 181 passing — and 55 on one play, a Newton TD to WR Ted Ginn Jr., one play after Thomas exited the game. That was the longest TD pass of the season against the Seahawks.

“Really great show at the stadium. I think (our offensive performance) really demonstrated how important Justin Britt is to us. Tyler Lockett had a great night, Russell a really solid night, Thomas Rawls ran like we expected. We were able to do what we needed to do in the running game. So it was a really good night across the board. On the other side of it, the defense played great. It’s something to hold a team like that to seven points. A fantastic night.” — Seahawks coach Pete Carroll

“We rallied after last week and really had a great week of practice. You have to have amnesia in this game. Tyler Lockett was lights out.” — Wilson

“You just pray for Earl. He’s been so dedicated. I think he’ll be able to overcome this. As far as retiring, I think that’s just a moment in his head. I think he’s just disappointed right now.” — Wilson

“All we can do right now is pray for Earl. It looks like he’s out for the rest of the season.” — Chancellor

“I wished we’d gotten some sacks, but we got a lot of pressure on (Newton) and that’s what you want.” — Seahawks DE Cliff Avril

The Seahawks travel to Green Bay next Sunday to face the Packers (1:25 p.m. FOX). The game. The Packers (6-6) defeated the Houston Texans 21-13 Sunday at Lambeau Field.