Thiel: Earl is out; then again, so are the Panthers

Earl Thomas’s season-ending injury, and his halftime tweet, left many unsettled. But with both lines operating near maximum efficiency against Carolina, any sense of crisis was undetectable. 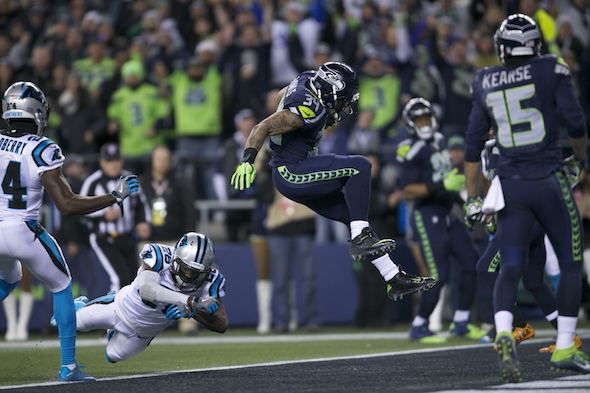 Thomas Rawls leaps into the end zone for one of his two touchdowns Sunday night. / Drew Sellers, Sportspress Northwest

News of the loss for the season of FS Earl Thomas to a broken leg hung for awhile in the cold air the Clink Sunday night. A 23-7 lead over the the irascible Carolina Panthers was worthy of some delight, but the mercurial Thomas’s tweet from the locker room about considering retirement shot through the crowd via smartphones like a fork in an electrical outlet.

Then came a jolt of a far different kind  — on the first scrimmage play of the second half, WR Tyler Lockett’s 75-yard end-around for a touchdown was about as thrilling as a Usain Bolt Olympic dash. A wave of adrenaline drowned the sadness.

Said WR Doug Baldwin, who loves to tease his teammate that he’s faster: “I don’t think I’ve ever seen anyone run faster on the football field.”

Lockett’s jet down the sidelines outpaced defenders who had angles, leaving all slack-jawed.

“I was joking with Tyler,” said QB Russell Wilson, “when I was 195 (pounds) in high school my senior year, I could run like that.”

Um, no. Even Lockett couldn’t run like that this season, until that moment, thanks to leg injuries that diminished his explosiveness.

“I thought if I get caught, I’d never hear the end of it,” he said, grinning.

Lockett was back. So were C Justin Britt, DE Michael Bennett, CB DeShawn Shead and LB Mike Morgan. So was the old-time Seahawks swagger after a 40-7 walloping of the Panthers that followed by one week a pitiful 14-5 loss in Tampa to the mediocre Bucs.

The loss of Thomas was a serious blow, because the Seahawks’ cover-3, single-safety defense is based in part on Thomas’s unique ability to run exceptionally fast from sideline to sideline. Backup Steve Terrell is an admirable replacement, but no safety in the NFL is Earl Thomas.

The compensation for Thomas will be a story weeks in the telling, yet shouldn’t dwarf the accomplishments of the evening. Before an NBC national audience, the Seahawks reasserted hegemony over the team that buried them with a 31-0 first half in Charlotte in a playoff elimination. They also buried the Tampa defeat with a devastating running game and a defense that stifled QB Cam Newton, whose pre-game wardrobe malfunction added low comedy to a season already high in distraction.

“We were so much different, and so far off last week,” said coach Pete Carroll. “The great thing is we answered it. I rave about the (Carolina) running game, because of the complexities of it. Our guys were on it all night long. We played a terrific game at the line of scrimmage.”

The Panthers gained 89 yards in 21 carries, much of it late in when the element of contest vanished. Throwing, Newton was 14 of 32 for 182 yards, 55 of which came on a single, second-quarter touchdown pass to Ted Ginn Jr. on the play after Thomas went out when the Seahawks made an assignment error.

The biggest joy of the evening for Seattle was the offensive line blowing holes for RB Thomas Rawls, who had two touchdowns in his 106 yards on 15 carries.

The comfort level with Britt over rookie Joey Hunt, making his first NFL start last was week, was startling.

“In a young group of guys, they’re really counting on Justin,” Carroll said. “Without him, it was difficult on them. That just made everything look out or sync. I think it was pretty obvious when you see the comparison this week.”

Primary beneficiary was Rawls, who said he woke up Sunday morning feeling loose, limber and much more prepared to run his usual slash-and-bash style.

“I felt like I could make some cuts I wasn’t making,” he said. “I could trust my eyes and the big boys up front.

“I have to trust more. I have to be patient more. Let the game come to me, and then take off when I pass the big boys. The guys up front did so phenomenal, I can’t wait to get back to practice.”

Rawls is in only his second year, and really hasn’t logged a full season of 16 games. He’s still making errors that will diminish over time.

“It’s just that sometimes my mind tells me to do something,” he said, “and my body tells me something different.”

It’s a feeling familiar to anyone over about 30, but most of us aren’t being chased by mean, 300-pound men.

The near-shutout by the defense, and the rebound by the O-line, invigorated everyone in blue.

“The guys had a blast,” Carroll said. “This was really fun playing football tonight. You hope to have games like this every once in a while. “Our guys enjoyed the heck out of it.”

The Seahawks enter the season’s final quarter at 8-3-1, closing against four foes who don’t have winning records. True, they won’t have Thomas. They do have almost everything else figured out.