The game was full of oddness: A wardrobe malfunction by Carolina QB Cam Newton, an unexpected sideline visit by Marshawn Lynch and a whole lot of nothin’ from the Panthers. 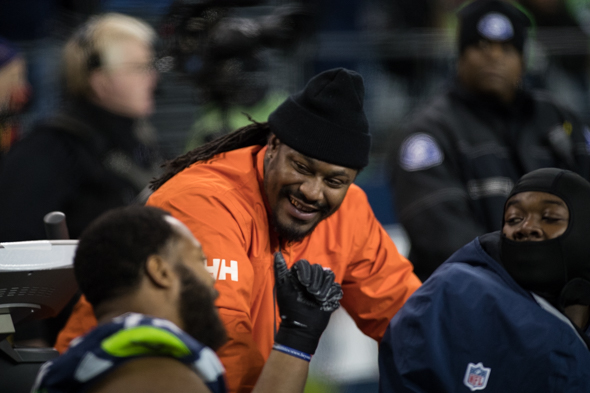 Marshawn Lynch, still a fan favorite in Seattle, made a surprise appearance behind the bench Sunday. / Drew McKenzie, Sportspress Northwest

Even with the 4-7 record of the Carolina Panthers, many expected another instant classic  with the Seattle Seahawks Sunday. NBC thought so, selecting the game for the coveted Sunday Night Football slot in the hopes of an epic clash. Instead, the game was marked by one-sidedness and oddness.

Adding to the frenzy was a 534-yard eruption from the once-moldering Seattle offense, a visit to the sidelines by retired RB Marshawn Lynch and a wardrobe malfunction by Panthers QB Cam Newton.

As the Panthers prepared to take the field for their opening drive, word spread that controversial superstar Newton would not start, due to a violation of the team’s dress code ahead of a Friday walk-through practice.

The ball bounced off Tolbert’s outstretched hands into waiting LB Mike Morgan for his first career interception, in his first start after eight weeks on injured reserve. Seattle came away with just a field goal, but it was a steep price for the Panthers to pay for a fashion faux pas.

DE Cliff Avril was stunned to learn the reason for Newton’s absence.

Coach Ron Rivera said it was his call, and wasn’t happy talking about it.

“It was a travel code violation,” he said. “The decision to treat like I do all the other players and he didn’t start.

“I’m not going to get into what our dress code is. We’re moving on. We’re going to talk about the football game.”

“He told me I wasn’t going to start, so I stand by his decision,” he said. “Needless to say, there was a lack of communication on my part. If the coach feels I wasn’t dressed appropriate, then I wasn’t.”

Newton said because they were on a 10-day West Coast trip after playing in Oakland, he didn’t have a dress shirt to accommodate a tie (apparently there are no clothing outlets in Oakland or Seattle) because he and many players had shipped clothes home.

Whatever the case, it cost Carolina three points, but was hardly the worst of their problems. But the Seahawks had a share of their own football headaches.

In the second quarter, after a drive stalled, the Seahawks went for it on fourth-and-five from the Carolina 36. Wilson was sacked by Charles Johnson for a 10-yard loss.

Three plays later, the tables turned again, when Wilson threw into quadruple coverage on third down and was picked off by Tre Boston.

The first half had a final, grim twist. Newton passed deep over the middle to TE Greg Olsen, who was converged upon by FS Earl Thomas and SS Kam Chancellor. The pair broke up the pass and collided at full speed. It broke Thomas’s left leg.

From the locker room after the diagnosis, Thomas, a very emotional guy, sent out a tweet that caused serious concern:

This game has been so good to me no regrets.. A lot is running through my mind including retirement thanks for all the prayers.

Kam you owe me a steak . Haha

Coach Pete Carroll and teammates asserted that Thomas was, well, being Thomas.

“Earl’s apt to say something that might surprise you, and he did,” Carroll said. “He’s OK. He’s going to be all right.”

Then the evening turned back toward the spectacular. WR Tyler Lockett took Seattle’s first play from scrimmage in the second half 75 yards for a touchdown, the longest run by a Seattle player in CenturyLink Field history.

After an injury-pickled season, Lockett was happy to return to his old habits of torching defenses.

“I think I finally got to hit that extra gear that I’ve been waiting on,” Lockett said. “When I got past that safety, the biggest thing that I was thinking was, don’t get caught. If I get caught, I’ll never hear the end of it in meetings. I think I’ve got to work on my form a little bit — pick my knees up.”

Lockett’s scamper put the Seahawks up 30-7.

Back to the weirdness. Late in the third quarter, the TV camera panned over to a figure sitting on Seattle’s bench: Marshawn Lynch.

The NFL’s clown prince, in a conspicuous orange rain jacket, was shod in flip-flops and socks (his cleats, obviously, are still on the telephone wire). The 69,104 in attendance erupted in a roar as Lynch laughed with his ex-teammates, looking like an old high school alum who had thought to drop by when he was home on break.

Lynch took everyone by surprise.

“We found out he was in town when he showed up on the sideline,” Avril said. “He usually texts me to let me know, but it was cool to see him. Obviously, everybody still loves him out here. He said he was watching the game and he was like, ‘Ah, let me go say what’s up to the guys.’

“That’s random as hell, but that’s Marshawn for you.”

Sunday the lopsidedness was partly the result of an injury-ridden Carolina team stumbling against a team eager to do everything right after a bad road performance a week prior.

Those who came expecting a duel for the ages didn’t what they were hoping for. But no one can walk away saying that the game wasn’t memorable.

It was how Marshawn would have wanted.