A rare (and needed) offensive show by Seahawks

In the 40-7 rout of Carolina Sunday night, the Seahawks produced a rare offensive game, highlighted by the individual efforts of WR Tyler Lockett and RB Thomas Rawls. 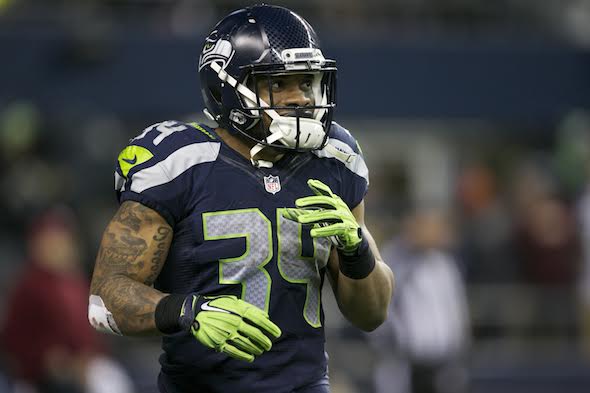 RB Thomas Rawls produced one of the rare games by a running back in Seahawks history Sunday night against Carolina. / Drew Sellers, Sportspress Northwest

Had there not been a blown assignment on the play immediately following FS Earl Thomas’ tortured departure with a broken tibia Sunday night, a goof that resulted in a 55-yard TD bomb from QB Cam Newton to WR Ted Ginn Jr., the Seahawks would have had their first shutout since a 26-0 dousing of the Chicago Bears in the third week of the 2015 season.

As it was, Seattle’s 33-point win over Carolina (40-7) marked its largest margin of victory since the 35-point rampage (43-8) over Denver in Super Bowl XLVIII.

Sunday’s offensive turnaround from the previous week, a 14-5 loss at Tampa Bay, couldn’t have been more emphatic. At Tampa, the Seahawks netted 245 yards, 118 passing, and failed to score a touchdown for the third time this season. The Monday following, the Seahawks grimaced as they watched the .500 Buccaneers humiliate their offense, holding Russell Wilson to a 38.8 passer rating.

“You saw everybody had a different look in their eyes because we realized we could get beat,’’ WR Tyler Lockett said. “Nobody wanted to go watch the film on Monday but we had to sit there and really watch it and it was nasty.’’

Spurred by that drubbing, the Seahawks rolled up 534 yards and put up a season-high 40 points against the Panthers to go 8-3-1 with four games to play. Seattle’s only other streak of at least five winning seasons in a row: 2003-07.

“The great thing is we answered (the laid egg at Tampa Bay) and came back,” said coach Pete Carroll. “We got the offense rolling, and had a big first half, 300 yards. The running game was alive and rolling and Thomas (Rawls) was on.

“We were able to do what we needed to do in the running game. I think that was what felt so good. We really had good continuity. Different styles of things that we did worked. Guys blocked really well. Thomas looked like Thomas. He finally got his legs back underneath him, and he looked great. We were so much different, and so far off of last week, it was obvious that was the case. Things were cooking.”

The Seahawks ran 71 offensive plays against Carolina, not anywhere near the franchise single-game record (90 at San Diego in 2002), but finished with 534 total yards, averaging 7.52 yards per play. In only five previous games in team history, only one coached by Carroll, did the Seahawks amass 530 or more yards and average at least seven yards a pop:

Lockett and Rawls both contributed to the extraordinary yards-per-carry average, Rawls with his 45-yard TD run in the second quarter, Lockett with his 75-yard burst in the third. Lockett’s scoring run was the longest in CenturyLink Field history, eclipsing by three yards the 72-yard TD by C.J. Prosise against Philadelphia Nov. 20.

This is the first time in franchise history the Seahawks have produced two scoring runs of 70 yards or longer in the same season.

“I don’t know that I’ve seen a guy look faster than when he finished that run tonight,” said Carroll.

(Question for the Seattle house: Who would win a footrace between Lockett and Washington’s John Ross?)

Lockett’s 75-yarder, a fly sweep around the right side, is the second-longest rushing touchdown by a wide receiver in franchise history, following a similar sweep by Joey Galloway at Jacksonville in 1995. It also ranks as the fourth-longest by a receiver since the 1970 NFL-AFL merger.:

Rawls produced his first 100-yard rushing game since a 19-carry, 101-yard performance at Minnesota Dec. 6, 2015. He finished with 106 and two touchdowns. But 103 of that, plus both touchdowns, occurred in the first half. Rawls, who passed a concussion protocol at halftime, had four carries in the second half, but the Seahawks gouged out 240 rushing yards overall (sixth-highest total of the Carroll era) against a Carolina team that had held opponents to 79 per game.

Seattle’s rushing number might have been reduced had All-Pro LB Luke Kuechly not missed the game with a concussion, but who knows? If Rawls hadn’t gotten banged on the head, he might have gone for 150  yards.

As it was, Rawls produced a rare set of numbers. In Seattle’s 41-year-history, only four running backs, Lynch twice, ran for more than 100 yards and scored two touchdowns on 15 or fewer carries: