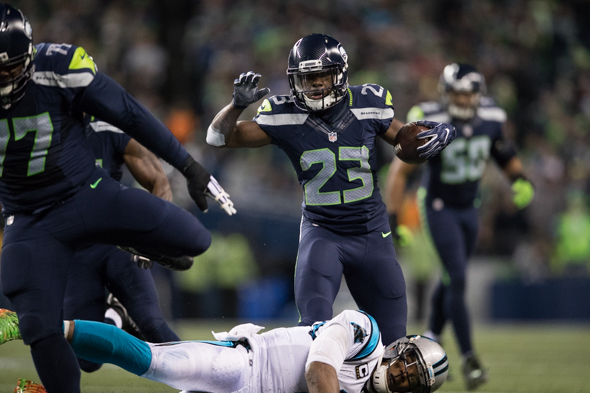 Steven Terrell steps in for Earl Thomas, out for the year with a broken leg. / Drew McKenzie, Sportspress Northwest

It became obvious early in his Monday afternoon presser at Seahawks headquarters that coach Pete Carroll really didn’t care to address the Earl Thomas injury, the tibia in his left leg broken in a collision during the game Sunday against Carolina Panthers Sunday at CenturyLink Field. In fact, Carroll seemed almost irked by numerous media questions about the five-time All-Pro, but did say:

“He is going to be out for the season. He’s got a serious recovery time he has to go through and there is no shot for him to come back this year. He seems to be doing OK. He’s doing all right. He’s going through the emotional part of dealing with it. I’m not going to talk about recovery time. As for surgery, I don’t know that.”

Thomas was covering a pass attempt by QB Cam Newton in the first half. Thomas appeared to have his hands on an interception, but he and teammate SS Kam Chancellor ran into each other and went down in a heap. A cart took Thomas off the field, his season over.

Back after a hamstring injury that ended his streak of 106 consecutive games played a week earlier at Tampa Bay, Thomas tweeted at halftime that he is mulling retirement.

“I can’t help you on that,” Carroll said of the tweet. “I know it’s really generated a lot of curiosity. He’s going through, at the time, the emotional part of dealing with an injury that’s a serious setback. I don’t know much more about it than that.”

Since there is little time in the NFL to mourn the loss of a wounded player, even one as gifted as Thomas, Carroll seemed almost eager to jump ahead to Steven Terrell, who will replace Thomas in the starting lineup.

Like Thomas, Terrell (5-10, 197) is a Texan. The four-year pro attended Texas A&M and signed with Jacksonville as an undrafted free agent before coming to Seattle in 2014.

“I don’t think you are ever going to replace Earl Thomas,” said Carroll. “But we’re going to play Steven at that spot and he’s going to do the best he can do. We’re very confident in what he can do. He’s been with us a long time, he knows the concepts and is a very disciplined player.

“It’s fortunate for us that Steven will be able to step up. He’s been a backup safety and he’s played some corner and nickel and is a core special teams guy. He’s got tons of work in and we’re comfortable with him in that spot. We’ve been through many instances of where guys go out and others step in.”

While Carroll didn’t want to elaborate on the loss of Thomas, he was more than willing to rehash the 40-7 win against last year’s Super Bowl loser. The Seahawks scored a season-high 40 points and generated 534 yards of total offense, 240 rushing.

“We are really fired up about what happened on offense against the No. 1 defense against the rush going into this game,” Carroll said. “(Center) Justin Britt was a really positive factor. Germain Ifedi probably had his best game. He was really effective. George Fant and Brad Sowell both did a nice job in the running game. All of our receivers contributed. And one thing we haven’t mentioned: Jimmy Graham did a really good job of blocking. He’ll continue to get better.”

Of the return of Britt, who didn’t play at Tampa Bay because of a sprained ankle, Carroll added, “The confidence he brings guys, the communication, it’s very clear that getting him back was very important. He played big and strong.”