A seldom-used backup, Steven Terrell, will be joined by a street free agent, former Boomer Jeron Johnson, to do the impossible: Replace Earl Thomas in a game in Green Bay against Aaron Rodgers. 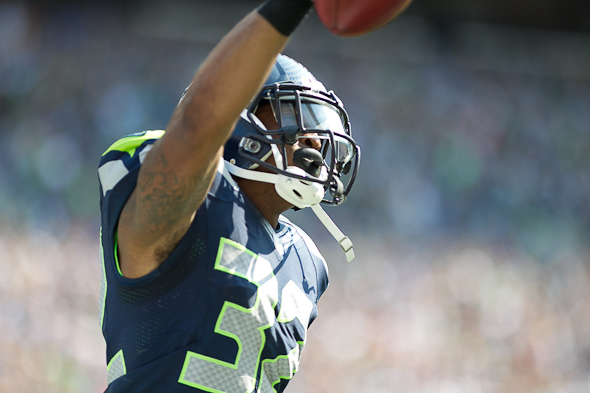 Jeron Johnson knew when Earl Thomas went down that he would be getting a phone call. / Drew McKenzie, Sportspress Northwest

Earl Thomas has been to the Seahawks defense what Russell Wilson is to the offense: Nearly indispensable. Their football talents are so unusual that they allow the Seahawks to get away with stuff that other teams dare not try.

Just as Wilson’s quickness and athleticism allow the offense to play with a substandard line, the Seahawks defense can get away with a cover-3, single-safety zone because Thomas is so fast and savvy that he tips the risk-reward consistently in the Seahawks’ favor.

“I don’t think you’re going to replace Earl Thomas,” Pete Carroll said Monday, more direct than usual. “Earl is Earl. We’re going to play Steven (Terrell) at the spot and he’s going to do the best he can.”

Terrell is a solid player, but he was an undrafted free agent. Thomas was a first-round draft choice. Both grew up in Texas — Terrell’s hometown of Allen is 270 miles from Thomas’s home in Orange — but Thomas went to the University of Texas, where all the cool high school players in the Lone Star State end up.

“I wanted to go to Texas, but they didn’t offer,” said Terrell said Wednesday. “So I went to Texas A&M. Everybody wants to go to Texas.”

Terrell and Thomas played against each other in the annual Thanksgiving day game between the schools in 2009 when Terrell was freshman.

“They beat us,” Terrell said. “We always kind of got a little rivalry going. I’ve been talking a little bit of noise to him since A&M has been better than Texas recently. It’s a good little rivalry.”

Now, the conversations are serious.

“Earl’s a good teacher,” he said. “I learn more from him just asking questions, his mindset about things and how he sees certain situations. Little things in our position, like reading the quarterback, or what is the first thing you do when you watch film.

“I feel very prepared. Just  being in the system for a few years, I feel pretty confident. There’s not many people in this league get a chance to learn from one of the best in this game.”

Terrell gets his second career start Sunday upon the fabled frozen tundra of Green Bay (1:25 p.m., FOX), where the likelihood of snow makes it even on harder on defenders — as if it wasn’t bad enough that QB Aaron Rodgers was drawing circles around Terrell’s image on his Surface tablet.

“You got to prepare for that — I would assume they would,” Terrell said of being Rodgers’ primary target.  “This defense, it’s kind of hard to single one person out and try to attack them. But I assume they will come after me.”

Packers coach Mike McCarthy sounded as if he understood the blow to Seattle and the opportunity for the Packers.

“Earl is a playmaker,” McCarthy said on a teleconference call. “He has tremendous range. His anticipation and understanding of what the offense is doing . . . I think he’s at the top of his game. How well that will be replaced, that’s really has to be seen by Terrell.”

Just in case Terrell has trouble, the Seahawks Tuesday called for backup for the backup. Jeron Johnson, a four-year member of the Legion of Boom and a free agent, was signed Tuesday. almost literally off his couch.

Johnson, a star on Chris Petersen’s Boise State teams, was a Legion infantryman for 46 games from 2011-15 for the Seahawks as a backup safety and a key special teams member. He left in free agency for a two-year, $4 million deal with Washington, where he was a backup for a year, then released.

He joined Kansas City but was cut Sept. 2 and has been a free agent since. He kept his home in Renton, working out at LA Fitness, running at Rainier Beach High School and flying around the country for tryouts for teams in need.

He was at home on the couch Sunday, watching the Seahawks game against Carolina with his girlfriend and daughter, when he saw the collision between Thomas and SS Kam Chancellor that broke the tibia in Thomas’s left leg.

“The first replay showed it looked bad,” he said. “She looked and me, and we were silent for 10-15 minutes. Just kept watching. I knew if it was bad, I’d get called.

“It’s really unfortunate what happened to Earl, but I’m grateful for the opportunity.”

His agent called Monday to tell him to get to Seahawks HQ for a tryout, a trip that took about 10 minutes. The decision to sign him was easy.

“We worked a few guys out and it really made sense,” said coach Pete Carroll. “He looked good, he’s in good shape. He’s maintained a good conditioning level, so it was a real obvious choice for us.

“We’re hoping that he can give us some play at (both safety spots) and do some special team work for us, as he’s done in the past. He’s a really smart football player.”

Johnson was so thrilled he said he do long snaps if asked.

“Truly I felt at home coming back into this locker room for a workout,” he said. “Like Seeing family members. Happy to be back.”

It must be a fine family if he’s willing to join in time to get his first game of the year in the frozen Midwest taking the best shots from one of the game’s greats while replacing one of the game’s irreplaceables.