No major deals, but the Mariners added RHP Chris Heston from the Giants to end baseball’s winter meetings. Heston will compete for a back-of-the-rotation job in spring training. 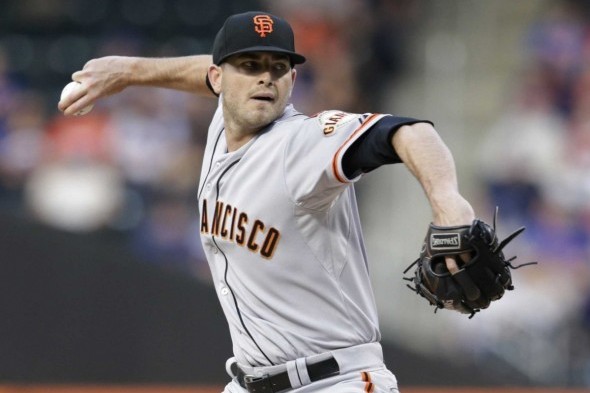 Having consummated a major five-player trade, notably netting a new shortstop and leadoff hitter in Jean Segura, Mariners GM Jerry Dipoto did not figure to be particularly active at baseball’s annual Winter Meetings — and wasn’t. His most notable move during the three-day confab at Oxon Hill, MD., was the acquisition of RHP Chris Heston, a former starter expected to compete for a back-of-the rotation job.

Seattle will send San Francisco a player to be named later in order to acquire Heston, and designated for assignment INF/OF Richie Shaffer, acquired last month from Tampa Bay, to make room on the 40-man roster.

“Adding Chris is another move in our continuing effort to build a deep and flexible pitching staff,” said GM Jerry Dipoto. “His composure and solid feel to pitch has produced positive results at all levels throughout his career.”

Heston, 28, made San Francisco’s Opening Day roster last year and had four relief appearances. He spent most of the season with AAA Sacramento, where he went 2-9 with a 4.54 ERA in 15 games, including 14 starts. He also was on the 60-day disabled list with an oblique strain.

The Mariners acquired Shaffer, 25, in a five-player trade with Tampa Bay Nov. 18. He appeared in 20 games over three stints with the Rays last year. Overall, he hit .250 at the MLB level after spending most of the year with AAA Durham in the International League.

The Mariners acquired two players on the final day of the meeting, selecting LHP Paul Paez from the Mets and OF Chuck Taylor from the Diamondbacks in the AAA phrase of the Rule 5 draft. Through the same process, the Mariners lost RHP Kevin Gadea to Tampa Bay and OF Austin Wilson to the St. Louis Cardinals.

Taylor, 23, last year hit .261 in 83 games with AA Mobile and A Visalia in the Diamondbacks organization. Taylor has played all three outfield positions in his three-year pro career. Arizona selected him in the fourth round of the 2012 draft.

Depoto’s moves represent only a fraction of his activity since the offsseason began Nov. 1.

Nov. 3: Exercised 2017 option on OF Steve Smith, but allowed five players, including 1Bs Dae-Ho Lee and Adam Lind and C Chris Ianetta, to become free agents. Seattle also lost OF Nori Aoki to the Houston Astros in a waiver claim.

Nov. 4: Claimed 27-year-old LHP Dean Kiekhefer from the Cardinals. He had five stints with St. Louis in 2016 after making his MLB debut May 14.

Nov. 7: Traded reliever Vidal Nuno to the Los Angeles Dodgers for veteran C Carlos Ruiz, a 37-year-old who was an All-Star with Philadelphia in 2012.

Nov. 12: Acquired 32-year-old infielder Danny Valencia, who hit .287 in 130 games in 2016, from the Oakland A’s in exchange for minor league pitcher Paul Blackburn.

Nov. 19: Lost LHP David Rollins off waivers to the Cubs, released OF Stefen Romero so he could pursue a career in Japan, added INF D.J. Peterson and LHP Paul Fry to the 40-man roster from AAA Tacoma.

Nov. 28: Traded the No. 6 overall pick in the 2014 draft, OF Alex Jackson, to the Atlanta Braves for RHPs Robert Whalen and Max Povse.

Dec. 7: Acquired RHP Chris Heston, best known for his June 9, 2015 no-hitter against the Mets, from San Francisco in exchange for a player to be named later.