Rival ideas for a privately funded arena in Sodo or Seattle Center are stirring debate, including dubious remarks from Mayor Ed Murray, and a pained response from Chris Hansen. 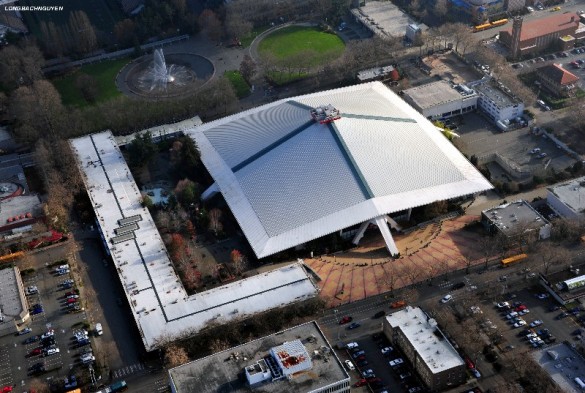 Oak View Group of Los Angeles seeks to work up a plan to remodel KeyArena to suit NBA and NHL teams. / pbase.com

For a city and sports marketplace that has flailed about for most of a decade trying to build an arena, Seattle suddenly is on the verge of two offers to build one virtually for free. Mayor Ed Murray, who likely wouldn’t know a hockey puck if struck by one, has to be bewildered: Where, he might ask, is such funding for housing the homeless?

But as he surely must know, that is not how America works. In America, them that has, do. And as long as it doesn’t cost city much of anything to do, mayors, county executives and governors love physical monuments to their tenures.

Did I mention Murray is up for re-election in November?

Also up for expiration at the same time is Chris Hansen’s five-year memorandum of understanding to build an arena in Sodo. The project was all but thwarted in May by a city council that didn’t want to vacate a street for his project, citing a complaint from a neighbor, the Port of Seattle.

Those two events are the drivers for the flurry of arena news.

But because Murray, a longtime supporter of the port, is not eager to revisit Hansen’s plan, even after Hansen took off the table his request for up to $200 million in public borrowing, he was desperate for an alternative that would not make him look like a chump for turning down a free showpiece sports hall.

His desperation was known to Tod Leiweke, former Seahawks CEO who hired Pete Carroll and John Schneider, and is now the chief operating officer of the NFL. Tod’s brother, Tim, has been a big deal for a long time operating sports franchises and building venues. He runs a Los Angeles company, Oak View Group, whose motto is: “We are here to be a positive disruption to business as usual in the sports and live entertainment industry.”

Tod told Tim some months ago to call Murray.

Oak View Group’s initial belief that the Key might be re-done privately inspired the city’s plan to issue in January a request for proposals (RFP) to developers who would tell Murray and the city if it were possible. And do it really fast.

Tim Leiweke was in Seattle this week to talk up his response to the pending RFP. Since it was the first time he’s spoken at length publicly to media outlets, here’s a quick summary:

On an ESPN 710 interview Wednesday, here is how Leiweke put it:

“We want to be the catalyst so this might be the best day Chris ever had because we might be able to solve the facility issue without him spending $700 million or $800 million (to build the arena).”

Given OVG’s history of work in arenas, Leiweke has more credibility than any previous proponent of the Key option. But until the RFP requirements are defined, particularly regarding the most difficult task — estimating traffic and parking impacts on the surrounding residential neighborhood already being massively redeveloped since the 2008 departure of the Sonics — the likelihood of OVG responding in a few months’ time with an accurate assessment seems small. Especially in view of the knowledge that the state-required environmental impact statement for the Hansen project took 18 months.

But Thursday during an interview on KUOW-FM radio, Murray threw a wrench in the proceedings by seeming to indicate he still misunderstands what Hansen seeks to do.

“What we’ve heard from Chris Hansen, he’d really like that arena. But he himself is not going to bring us a team. So we have several questions we need to sort out here. One is that the city has a resource that the taxpayer is going to pay for, one way or another, and that’s KeyArena.

What that suggests, awkwardly, is that Murray still doesn’t understand/believe that Hansen needs the street vacation first before he can pursue a tenant for the Sodo location, even though Hansen has committed in the MOU to buying a team via expansion or relocation. In a revised proposal that Hansen said he would submit shortly to the council, he re-states explicitly that no work will be done on the vacated street unless and until a team is acquired.

Murray’s description suggests “someone” needs to bring Seattle a team. But that can’t be OVG, for reasons stated by Leiweke. And Hansen is unlikely to want to wait the time it will take the Seattle process to seek from the several hundred constituencies that use Seattle Center their approvals for whatever remodel OVG presents. Not only that, the project must make money for the private developers, unless they plan to make this a project of civic philanthropy, which never came up in Leiweke’s media interviews.

Almost inevitably, the surrounding residents of lower Queen Anne will litigate whatever the city/OVG concludes about impacts, as will the opponents of the Sodo project should the city council do a vote on the revised proposal and approve it.

Friday morning, Hansen’s group felt sufficiently stung by Murray’s remarks to issue a statement on its arena-news website reiterating the commitment made to bring NHL and NBA teams.

While not responding directly to Murray’s shot that Hansen “himself is not going to bring us a team,” the statement recited the efforts over five years, including a reminder that a $30 million nonrefundable deposit was made in 2013 to the then-owners of the Sacramento Kings in the eventually failed attempt to buy and relocate the franchise to Seattle.

“The record clearly demonstrates our steadfast determination to bring basketball and hockey back to Seattle,” said the statement, signed by Hansen and his partners, including the newest member, Seahawks QB Russell Wilson.

From his words, Murray sounds as if he’s already tilting the field in favor of OVG, even before the RFP is made public, because he seems to dismiss Hansen’s chances even before he has seen the revised Sodo proposal.

If you thought the chore already engaged by Hansen was 40 miles of bad road on a bicycle with no end in sight, imagine trying to build an arena, not on private industrial land, but public parkland surrounded by a residential community.