MLS Cup week is on in Toronto. Tactics are laid out, Schmetzer is irked at a question about succeeding Schmid, the rival mayors throw down beer bets and a Toronto player is thrilled more than most. 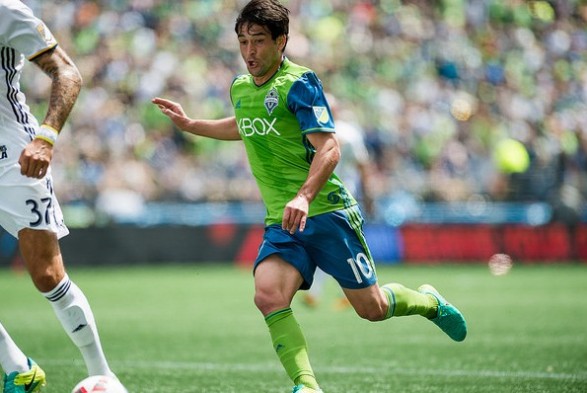 TORONTO — As the MLS Cup final looms (5 p.m. Saturday, FOX), the media frenzy surrounding the Seattle Sounders and Toronto FC ratcheted up at the training ground  here with a major word scrum Thursday. The best slices of the action:

The build-up doesn’t bear many secrets for Seattle or Toronto as far as what either can expect to see from the foe. After 39 regular and post-season contests, it’s difficult not to tip your hand.

Barring a drastic reshuffle from coach Brian Schmetzer, Seattle will play a 4-2-3-1, utilizing star midfielder Nicolas Lodeiro in a central attacking role to support distribution of the ball. Depending on the mood of the match, they’ll either work to maintain possession in the midfield and run Toronto ragged, or sit back and absorb pressure before using long passes to spring a counter-attack. It’s a balanced approach that has benefited from a growth in team cohesiveness.

Schmetzer said Toronto’s 3-5-2, with its massive number in the midfield and the dominating presence of Michael Bradley, could present problems, but countered that execution would win the day.

“Wherever players are and whatever systems there are, they have to make plays,” Schmetzer said. “If Lodeiro and Bradley are going to be matched up on the same area of the field, one of those players has to win that battle. So we can be successful whether it’s a 3-5-2 or a four-man back line.

“Yes, you watch that and try to prepare as best as possible. But it comes down to the players, how they kind of define their roles, within our system.”

“Altidore is a very good target forward who also has the ability to turn and run at you,” Schmetzer said. “Giovinco is a forward that can make plays. I hate that combination — that any coach would love to have. They are a dangerous tandem and it will require some key moments from (midfielder Osvaldo Alonso) to try and slow them down and an entire team effort to prevent them from scoring.”

For Toronto coach Greg Vanney, the 3-5-2 allows his team to play its distinct style of midfield build-up, while adapting to the opposition’s attacks. The decision to stick with the 3-5-2, he said, was made at the start of the playoffs.

“Going into the playoffs it made sense for us to go to the 3-5-2,” Vanney said. “It’s allowed us at times to be more aggressive when we want to press. It’s given us the ability to lock things down (on defense). In the two matches so far (each) against Montreal and New York City, we had two very different teams. We had to make some adjustments over each of those series, and we learned about ourselves.

“It gives us a little bit of both worlds as we approach a Seattle team who is good in possession but I think can also play out of the counter.”

Schmetzer gets a zinger question

The final question of Schmetzer’s press conference was a doozy. Former Sounders head coach Sigi Schmid was at Toronto FC’s training facility as part of his work covering MLS for Fox, a job he took almost immediately after being fired by the club July 26, but was not at the press conference.

Schmetzer answered with the kind of politeness that would rate an automatic pass on a Canadian citizenship test.

“I think your question is a little unfair,” Schmetzer said. “I think both of us have done a good job of putting this franchise into this position. You guys have to remember that I was part of Sigi’s staff for seven and a half years. Sigi and I, when we had our conversations, he was very appreciative of me. He allowed me to grow as a coach, so we don’t have any issues.

“The emotional side and the human element side is, when Sigi gets fired, I get the job. Someone has to get fired for me to get my opportunity. Those first couple days, you think about it. It’s definitely a bummer, but at the end of the day, he understands this business, I understand this business. There will be a day when I might not have a job, and you just deal with it. I think both of our contributions to Ozzie (Alonso), to Jordan (Morris), all the stuff he did for our club, off the field as well. I think we both share in that.”

Schmid was fired after the team fell to 6-12-2, the worst 20-game start in club history. Schmetzer won the permanent coaching job after he guided the team to the playoffs, going 8-2-4.

Schmid has told reporters that while he enjoys the work with Fox, he still feels like he can return to coaching professional soccer.

The mayoral bet is a time-honored tradition in high-profile sporting events. While these boasts and wagers are sometimes criticized as pandering to constituents, they can also help to inject some needed whimsy.

Toronto mayor John Tory took to Twitter Thursday, posting a video in which he told his Seattle counterpart,  Ed Murray, that if Toronto is beaten by the Sounders, he will reward Seattle’s mayor by sending some “real beer” and Canadian favorite Tim Horton’s coffee.

.@TimHortons vs. @Starbucks. @Drake vs. @Macklemore. CN Tower vs. Space Needle. @torontofc vs. @SoundersFC. The bet is on @MayorEdMurray! pic.twitter.com/Yfzs1hTixA

Murray, wearing the rainbow scarf with which he was honored by the club during its Pride Week festivities, responded with a video tweet by saying in the event of a loss, he would invite Tory to have a drink at Reuben’s, a Ballard microbrewery.

As for the coffee, Murray said he would pony up some of Starbucks’s special reserve roast, but couldn’t resist a parting jab:

“There are 10 Starbucks within walking distance of your city hall, so I’m sure you’ll have a chance to enjoy Starbucks even when you lose this bet.”

Toronto defender mimics Toronto’s narrative of least to most

Toronto FC defender Nick Hagglund had an emergency appendectomy in July 2015 and lingering knee injuries at the beginning of the season hurt his fight for minutes. Flash forward to Nov. 30,when he scored a powerful header in the 68th minute that tied the MLS Eastern Conference finals with Montreal in the second leg, which led  to Toronto’s victory and its first MLS Cup berth.

“The emotions can’t be stated,” Hagglund said Thursday. “It was an up and down season for me. If someone told me I’d be scoring a goal at this time of the playoffs, I don’t think I would have believed them.”

Early in the season, Hagglund was sent down to Toronto FC II, Toronto’s USL affiliate, to let the 24-year-old regain his feet.

Hagglund didn’t disappoint, earning USL player of the week honors in mid-May, before fighting his way back into the first team as the left center back in Toronto’s 3-5-2 formation.

“It was the first time (at the USL level) that I started believing in myself again after had appendicitis and then a little knee problem,” Hagglund said. “It was the first time I got to play 90 minutes in a game that actually mattered. I wouldn’t say it was a low point. I got to see and believe that I could do this again. Even the (award) allowed me to know that I’m a level above that and I could contribute in the MLS.”

The bond among fellow defenders Drew Moor and one-time Sounder Eriq Zavaleta has enabled the defense to excel despite a numerical mismatch in their backfield.

“A lot of people would say that we’re different in the ways that we approach the game,” Hagglund said. “I think what makes us good is our similarities in how we read the game and how we trust each other. Our communication is really good. It keeps the back three together.”

Hagglund’s experience mirrors his club’s late-bloomer narrative in MLS. Entering the league in 2007, Toronto had never won a playoff game until Oct. 26 with a knockout-round, 3-1 victory over the Philadelphia Union.

With momentum, the home field, and the adrenaline from most of an entire nation on their side, Hagglund and Toronto seek become the first Canadian club to hoist the MLS Cup.