Much is similar between Sounders and Reds

Seattle and Toronto, first-timers to the MLS Cup, share a number of other franchise deeds and storylines, including a NASL heritage and a contemporary boost from a major pro sports enterprise. 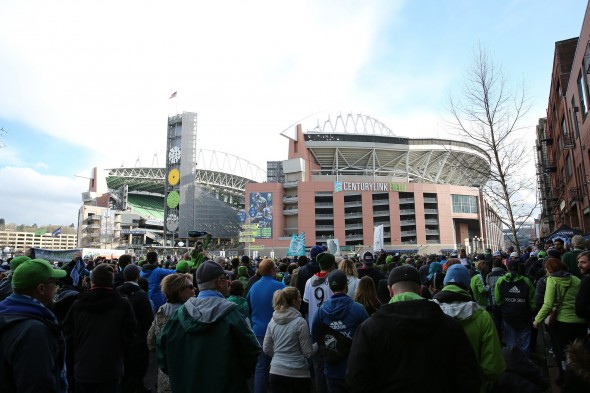 TORONTO — Saturday’s MLS Cup final between the Seattle Sounders and Toronto FC (5 p.m., FOX) at BMO Field is a high-stakes battle between two high-flying offenses. The game will have high visibility, in no small part due to the strong culture of support each team enjoys.

The Sounders are often the league’s darlings when it comes to supporter culture (though rival and defending MLS champion Portland gets a fair share of play in league promotional materials), averaging 44,247 fans in 2016, setting and breaking its own attendance records every year. They boast a colorful range of supporters’ groups: Emerald City Supporters, Gorilla FC, La Barra Fuerza Verde and the North End Faithful.

“The Sounders have been around since (1974),” Schmetzer said Thursday. “Going back in the ’70s, people were really excited to have a team. They played at Memorial Stadium, a high school football stadium, but they packed 12,000 people in there. When the Kingdome first came (in 1976), the Sounders played the first game there against the New York Cosmos and (Brazilian legend) Pele.

“Fast forward through a few lean years, lots of (players and coaches) stayed around. They live in the Seattle area. Then you have all the fans that started with us in 1974. It is a very big deal. As far as MLS is concerned, our fans have been waiting eight years for this moment.”

Schmetzer, who played for the NASL Sounders and later coached their USL incarnation, knows better than most the ties the club has to the city. In the NASL era, Seattle averaged more than 18,000 fans every season until the end in 1983, right before the league closed up shop.

In the MLS era begun in 2009, the reincarnated Sounders struck a chord. The team sold 22,000 season tickets before playing a game, and sharing front-office resources with the well-established Seahawks provided a leg up on a financial and organizational level.

Toronto boasts a similar history with the beautiful game. The Toronto Metros, later the Metros-Croatia and finally the Blizzard, joined the NASL in 1971, playing at the University of Toronto’s Varsity Stadium.

While the Metros never drew as well as the NASL Sounders, they did win the Soccer Bowl, NASL’s top prize, in 1976. Support was consistent, around 5,000 average.

After Global Television Network bought a majority of the team in 1979 for $2.6 million and rebranded as the Blizzard, attendance doubled. Toronto was one of few clubs to see attendance rise in NASL’s final years.

Toronto’s MLS return in 2007 was met with a similar level of enthusiasm. The club sold out its first three seasons, including 14,000 season tickets in its inaugural year, a league record at the time. Commissioner Don Garber said the club deserved credit for helping revitalize supporter culture in the league, ushering in the era referred to as “MLS 2.0.”

Toronto formed its own supporters’ groups, with colorful names like The Inebriatti, U-Sector, the Red Patch Boys, Tribal Rhythm Nation and the Kings in the North.

Toronto also benefited from joint coffers with other professional sports teams in the city. The club is owned by Maple Leaf Sports & Entertainment, which owns the NHL Maple Leafs, the NBA Toronto Raptors, and the Toronto Marlies of the American Hockey League.

In 2014, Toronto captain Michael Bradley, who also captains USMNT, arrived at the club following a high-profile transfer from Italy’s AS Roma. He said the players have an understanding of the significance of the game and the club to the city.

Each club also benefited from ineptitude from their competition as they burst onto the scene. The Sounders inherited a city with a vacancy with the 2008 departure of the NBA Sonics, and were helped by perennial haplessness by the Seattle Mariners, whose season coincides with MLS play.

Toronto benefited from similar misfortunes. The Maple Leafs have qualified for the playoffs once since the 2004 NHL lockout, while the Blue Jays were on a 13-year dry spell from the postseason when Toronto FC debuted in 2007. Toss in consistent inconsistency from the Raptors, and many sports fans in Toronto were looking for something new.

Toronto did not immediately embrace MLS soccer, providing the great difference between the Reds and the Sounders. While Seattle has been to the playoffs every year of its existence, Toronto FC never had a winning season until this year. It first qualified for the playoffs in 2015, losing in the knockout round.

Despite the on-field woes, the club’s fans endured, and are now knocking on the door of a championship. Both cities desperately want to reward the passionate support (and passionate spending) that has been done in their name.

One club will go home frustrated Saturday night, but Toronto and Seattle can still claim a measure of victory as they continue to help extend the boundaries of professional soccer in North America.