After 120 minutes of scorelessness went to a penalty-kick shootout, Roman Torres fired in the difference-maker to make the Seattle Sounders MLS champions for the first time. 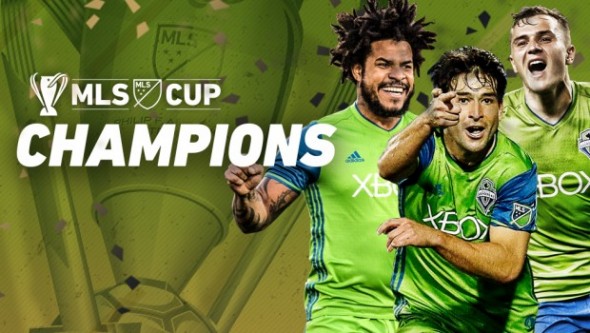 From nowhere in August to the summit in December, the Seattle Sounders, for the first time in eight seasons, are are champions of Major League Soccer.

Outshot and outplayed for much of a cold Canadian evening by homestanding Eastern champion Toronto FC, the Western champio  Sounders prevailed 5-4 on penalty kicks, the game-winner by burly Panamanian center back Roman Torres.

But the hero was GK Stefan Frei, who spent his first five MLS seasons with Toronto, then pitched a 120-minute shutout with seven saves against his old team. He also stopped two in penalties to create the winning margin. He was named game MVP.

Considering that the playoff run was accomplished without three franchise stalwarts who began training camp together — Clint Dempsey, Obafemi Martins and coach Sigi Schmid — the feat bordered on the astounding. And for Frei to be the decider against his first club was extra sweetness.

“I’m so happy for the fans and my team,” a jubilant Frei told KCPQ Ch. 13. “It’s really unfortunate it has to come down to penalties. It’s a team game. For it to be decided like that, it’s brutal.

“To see Roman, a big center back who’s probably not famous for his technique. to come up like that and slot it home, calm and cool. It’s like a dream come true.”

In the shootout, Frei denied Michael Bradley, the U.S. Men’s National Team captain, who struck a poor ball that Frei handled easily. After the first round tied at 3-3 and advanced to sudden death, Justin Morrow of Toronto hit the crossbar straight away.

That opened matters for the Sounders’ sixth kicker, Torres, whose late-season return from injury was a key element in the Sounders’ rise from ninth place in summer. His quick run-up and kick eluded TFC keeper Clint Irwin, ending three hours of tension for a sold-out crowd of 36,045 at BMO Field that was struck silent as a roaring Torres ran down the field trailed by his delighted teammates.

The Sounders were outshot 19-3, including no shots on goal — the first champion in MLS history to do that. But the defense was remarkable, especially on one save by Frei during extras. A well-placed loft by Toronto star Jozy Altidore was denied by Frei when he leaped left and, fully textended, reached slightly behind him to knock the ball away. It was one of four shots by Altidore that barely avoided the frame.

The match featured two teams — third-seeded Toronto entered the league in 2007, the fourth-seeded Sounders in 2009 — that had never been to a Cup final. They played an edgy, taut 90 minutes that had three yellow cards, a few verbal confrontations, a handful of injuries and several near-misses by TFC.

But nothing slipped past Frei, whereas Irwin, his counterpart, had little to do as the night wore on. Whether that made a difference is likely unknowable, but makes little difference to the champion Sounders, who followed last season’s winners, the Portland Timbers, to make the Northwest the axis of the North American pro soccer universe.

For most of the regular season, and for 120 minutes of the final match, the Sounders didn’t look like champions. But they are. Let the party begin.