Absurdly, Sounders win Cup with no shot on goal

On a frigid, tense night in Canada, the Sounders held Toronto FC scoreless for 120 minutes, then triumphed in penalty kicks to secure the club’s first MLS championship. 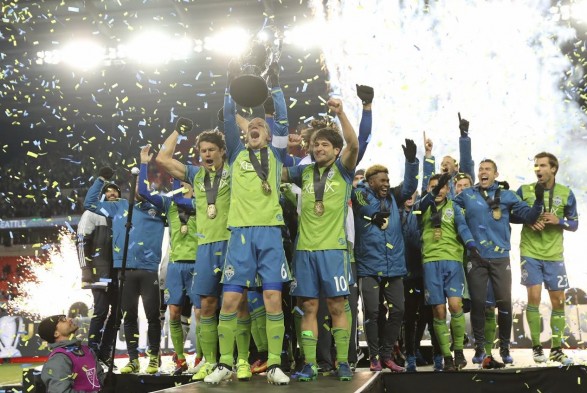 TORONTO — Thanks to an immense back line performance and a one-of-a-kind evening from keeper Stefan Frei, the Seattle Sounders are MLS champions. Three years to the day after Toronto traded Frei to Seattle for a first-round draft pick, Frei made an unlikely save in extra time and one more during penalty kicks to make club history in a 0-0 (5-4 pens) triumph at BMO Field in front of a venue-record 36,045.

The atmosphere was intense. As the match unfolded, the south end of the stadium lit up with flares, the main stands shook and rumbled. Screams and groans of Toronto fans filled the night in temperatures that dropped to 14 degrees including wind chill.

Thanks to Frei and Seattle’s back line, however, the Canadians went home frustrated as Seattle added the final trophy it had not yet claimed to its silverware case.

The euphoria of the first MLS title in club history was almost too much for coach Brian Schmetzer, the assistant coach made champion in six months.

“I think it’s going to take a while to sink in,” Schmetzer said. “I’m proud of those guys. I’m very happy for the traveling support. I’m happy for the fans that couldn’t make the trip out here and see the game live. I’m thankful for the opportunity that (majority owner Adrian Hanauer) gave me. I’m sure, 10 years from now, I’ll really be able to reflect and soak this in.

“It was a tremendous moment and one that may never come again.”

Stopping Toronto’s high-powered offense, which scored 18 goals in five playoff matches entering Saturday night, was nearly like trying to beat back the tide.

Forwards Sebastian Giovinco and Jozy Altidore were constant threats. Toronto out-shot Seattle 19-3 over 120 minutes. Seattle set league records for fewest shots in a final (three) and became the first team in league history to win without a shot on goal.

Chad Marshall, a four-time MLS defender of the year, said trying to slow down Toronto was a monumental task.

“Altidore’s a big boy,” Marshall said. “He’s strong. He puts himself about. The start of the game was crazy. It took a little bit to settle down, but once we figured out the rhythm of the game we did a good job from preventing him and Giovinco from getting quality touches. To keep them from getting a goal in 120 minutes at their place is something you can hang your hat on.

“Before I came to Seattle, I hadn’t been to the playoffs in three years. I wanted the opportunity to play big games, and that’s exactly what I got. We’re so excited to bring this back to Seattle.”

Seattle’s back line threw itself into the action. The Sounders blocked 10 shots, while Frei made seven saves. His greatest maneuver was reserved for extra time.

In the 108th minute, Tosaint Ricketts floated a cross into the box to an unmarked Altidore from the right alley. Altidore won a clean header, and sent the ball back the direction it had come, away from Frei and bound for the upper right corner of the net.

Diving backward, Frei stretched out and arm and brushed the ball aside with his fingertips just before it crossed the line, preserving the deadlock and ultimately forcing penalties.

“That’s the best save I’ve ever seen in person,” Marshall said of his 12-year domestic and international career. “No way he should have gotten there.”

Frei couldn’t believe the stop himself.

“That’s exactly how you want to hit that header,” he said. “Sometimes as a goalkeeper, you feel like you’re not going to get to a ball, but you never know until you try. I tried to keep my feet moving and gave it my best shot. Luckily, I was able to get there.”

It turned the game toward the Sounders.

“We had a chance to make history,” Frei said. “This is what you live for. You go to the San Siro (in Milan), and you get the tour of the stadium, you come to a black and white picture of the team that won the first trophy. MLS is pretty young, and you can make history.

“Granted, the picture probably won’t be black and white, but this is what you want to be a part of.”

Frei made a crucial save in the second round of the penalty shootout, diving right to deny USMNT captain Michael Bradley a goal that would have kept the shootout tied. A saved shot from Seattle substitute Alvaro Fernandez one round later, however, meant that the teams entered the sixth round of penalties tied 4-4.

Toronto midfielder Justin Morrow sent a laser shot down the middle that smashed into the crossbar and bounced away. That meant the chance for a sudden-death win fell to the Sounders.

As many craned their necks to see who would take the decisive kick, many were surprised to see the hulking, 6-foot-2 frame of Roman Torres marching up to the ball. Torres smashed the ball down the middle as Toronto keeper Clint Irwin dove to the left.

Match over. Players rushed to Torres to celebrate the victory, mobbing him as he fell to the ground.

Schmetzer praised his entire back line, but reserved plaudits for his keeper and Panamanian center back.

“Some people say defense wins championships,” Schmetzer said, grinning. “Roman had a tremendous performance. Jozy and Giovinco are tremendous players. They really put pressure on us. I was very pleased for Roman.”

Why choose the big defender for the shot?

“And he’s good with penalty kicks in practice.”

Another bit of history was reserved for Jordan Morris — the first player to win the NCAA Division I national championship (with Stanford), the Hermann Trophy (college soccer’s Heisman), the MLS Rookie of the Year award, and the MLS Cup in the span of a year.

The feat took 362 days. But the final was a rough one as Toronto smothered  him before he was subbed out in extra time.

“It’s been unbelievable,” Morris said of the last year. “As a kid growing up, you couldn’t dream of that happening. All credit to my teammates. My teammates at Stanford were a family, we won that as a team. Coming here, we won it a as team as well.

“We had a lot of ups and downs this year. A lot of people counted us out. A lot of people were counting us out of this game before it started. The resolve of this team, to fight for 120 minutes and then win in PKs, it’s awesome.”

The Sounders take great pride in pulling off an astonishing turnaround.

Overcoming the worst league start in team history, a midseason coaching change and the loss of superstar Clint Dempsey to injury, then going without a shot on goal on a cold, blustery night in Ontario, yet winning the match and the championship. Remember how it happened, because in the re-telling of this history, many listeners won’t believe it.

The Sounders announced post-game that a civic celebration will happen in Seattle sometime mid-day Tuesday. Exact time and location await planning with Seattle officials and police.