Thiel: A loss that rocks the Seahawks’ world

Bad as was the 38-10 beatdown in Green Bay, the consequences linger through the final three regular-season games because even big wins over weak division foes will be of little meaning. 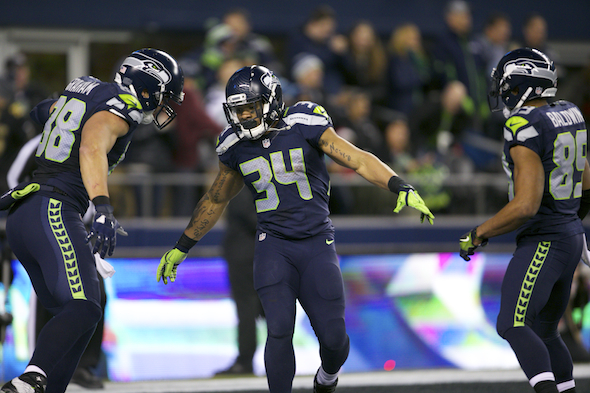 RB Thomas Rawls had about the only good game among Seahawks offensive players with 67 yards on 12 carries. / Drew Sellers, Sportspress Northwest file

No bad weather. No Russell Wilson injury. No missing starters on offense, or the front seven of the defense. So how to explain the Seahawks’ most egregious loss in the Pete Carroll era? Was the playbook hacked by Russians and leaked to Packers coach Mike McCarthy? Is Wilson spending too much time trying to be an NBA owner and not owning his own game? Was it cosmic payback for the epic “Fail Mary” game in 2012?

A month after beating the Patriots in New England 31-24, and a week after beating defending NFC champion Carolina 40-7, the Seahawks’ 38-10 walloping by the Packers Sunday at Lambeau Field might be the most mysterious defeat of Carroll’s tenure. Especially because it happened in December, when the Seahawks have been at their best.

Two weeks ago, they lost at Tampa Bay 14-5 when they were outslugged by the fast-improving Bucs. But following the recovery against the battered Panthers, the Seahawks bought their own hype when they had the hubris to call the loss a one-game aberration.

The nature of the Sunday’s pummeling had a degree of magnitude that will rock the season. Carroll seemed stunned.

“This is such a rare occurrence for our team,” he said. “We’ve been playing for a lot of years now and not seen a game like this.”

The Seahawks’ streak of 95 games with no loss greater than 10 points, a mark of real pride, was shattered.

“It’s a stat you don’t really want to be proud of (because it’s about losing),” he said. “But it’s a remarkable run. This was so out of character . . . we need to move on as quickly as we can.”

They might be the first team since the invention of the Thursday night game to actually want to play it, so eager are they for redemption.

“Everyone in that locker room is glad we’re playing Thursday,” he said. “Miserable night.”

The mere fact of a loss to the Packers in December is hardly a shocker — the Seahawks haven’t won in Green Bay since coach Mike Holmgren’s first return in 1999 — especially with QB Aaron Rodgers back to being the best. Despite straining his right calf on the game’s third play, a 66-yard touchdown pass to WR Davante Adams, Rodgers had as many incompletions as Wilson had interceptions — five.

But the timing screws up the Carroll calendar. Losing this bad, this late in the season with the Seahawks’ remaining schedule means that nothing of significance can be discerned the rest of the month about whether they are playoff-ready.

They play their three divisional opponents, all of whom are hot messes. Thursday’s foe, the Rams, lost 42-14 at home to Atlanta Sunday to fall to 4-9. The Christmas Eve opponent, Arizona, lost on the last play in a Miami rainstorm, 26-23, to drop to 5-7-1. The New Year’s Day foe in San Francisco, the 49ers, are 1-12 and may not even be bowl eligible after they lost 26-23 in overtime to the New York Jets.

Which is not to say that the Seahawks are locks to win any of the games, based on Sunday’s events. It’s just that beating any of them carries a so-what tag that tells Carroll and staff nothing about degree of preparedness for the real season in January.

Green Bay was the test. The Seahawks failed, because they couldn’t even make it a contest.

Culprits were many. Two stand out: Wilson and the pass rush.

Of the latter, Rodgers had so much time that he was was nearly towed for overtime parking. Despite dragging along a bum leg, Rodgers had plenty of time to pick apart the Seattle secondary, although Carroll denied that the absence of injured Pro Bowl FS Earl Thomas had anything to do with it.

“Had no impact,” said Carroll, claiming Thomas’s replacement, Steve Terrell, wasn’t a factor. “Steve didn’t have a play to make all night long.

“I’m real disappointed in rushing the passer. (Rodgers) was back there all night long. Aaron did what he does so well: He moved beautifully and made it look easy. He wasn’t running, he just moved.

“Very frustrating to watch him throw so easily.”

Only after the outcome was decided did the Seahawks get a sack — their first in three games. After missing a month following arthroscopic knee surgery, DE Michael Bennett isn’t his usual disruptive self, and his rush partner, Cliff Avril, was bottled up artfully.  The Seahawks risked few blitzes, perhaps partly due to the absence of Thomas.

Wilson, meanwhile, was uncharacteristically off, in a kind of bad-Felix-Hernandez sort of way. He lost command of his pitches, wildly over throwing WR Doug Baldwin and TE Jimmy Graham on Seattle’s first two possessions. Both receivers were so far past defenders that touchdowns seemed likely.

Even on short routes, he was often off. Then his receivers dropped four catchable balls, including two that deflected into Packers interceptions.

Wilson made a generic statement that the loss “is on me,” but was more vague and non-specific than usual. Carroll was even asked of Wilson had been hurt, to which he said no.

“That would’ve been easy, huh?” he said sardonically.

No, there will be nothing easy in unwinding this one, because failures were so broad a week after they were so few. As important, there is no time for a look-back because the work week allows almost no practice time. And as bad as the Rams looked Sunday, they beat Seattle 9-3 in week 2 after sweeping the series a year ago.

Rams coach Jeff Fisher may have become a joke in Los Angeles and across the NFL, but being king of Seattle might do wonders for his employment outlook.