The Sounders parade starts at 11 a.m. Tuesday at Westlake Park in in downtown Seattle and works its way to Seattle Center for a rally beneath the Space Needle. 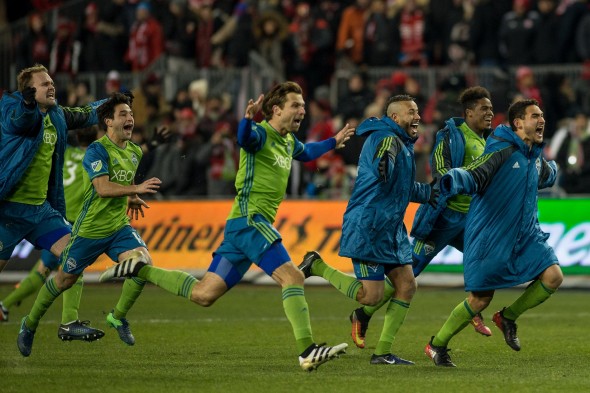 The civic celebration of the Sounders’ first championship begins at 11 a.m. Tuesday at Westlake Park downtown. The Sounders will travel on Emerald City trolleys, along with members of the Sounders Academy, supporters’ groups and the Sound Wave Band.

The victory parade will travel up Fourth Avenue before turning on Thomas Street, proceeding up Fifth Avenue the rest of the way to Seattle Center. Following the march, a rally is booked on the Fisher Lawn and fountain mall at Seattle Center, and will include appearances by Mayor Ed Murray, King County Executive Dow Constantine and Congressman Jim McDermott.

Sounders play-by-play voice Matt Johnson will host the ceremony, a stone’s throw from where the club began play at Memorial Stadium in 1974. During the ceremony, the club’s players will present the Philip F. Anschutz Trophy to the city for the first time.

The event continues the celebration that started when the Sounders touched down at Boeing Airfield Monday afternoon. The players hoisted the trophy in front of a throng of supporters to continuous cheers. A group of supporters asked keeper Stefan Frei if they could touch his left hand, the one that turned aside a sure goal from Jozy Altidore in extra time to keep Toronto off the board.

The party may have a slightly bitter taste for some of the Sounders. The MLS expansion draft is also 11 a.m. Tuesday,which  could mean that one of Seattle’s players bcomes a member of Atlanta United FC or Minnesota United FC by the time the parade reaches Seattle Center.

Those Seattle-area residents and visitors not taking part in the club events but planning travel in the affected areas should visit the City of Seattle’s Department of Transportation website for a full list of planned closures.Fans may also utilize Sound Transit to travel into and out of the city.

The Link light rail is running in inverted peak format on Tuesday, which offers three-car trains all day with a mix of two and three-car trains during peak hours. The Sounder midday trip leaving King Street Station at 2:32 p.m is a recommended train for fans heading south following the rally.