Somehow Rams owner Stan Kroenke thought it was a good idea to fire his coach, Jeff Fisher, on the Monday before a Thursday night game in Seattle. You know, it just might work. 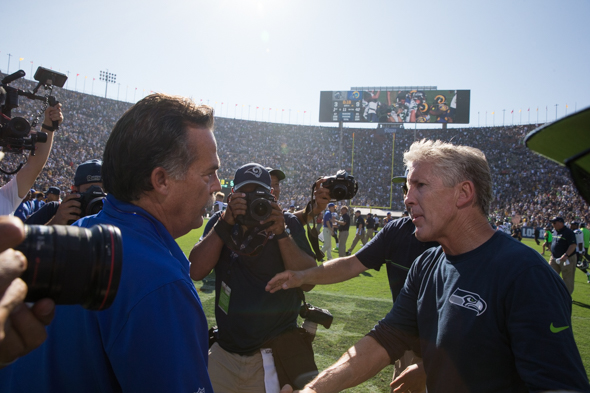 As Seahawks fans develop worry lines that look like Forest Service contour maps over a single, albeit gruesome, loss, consider the plight of the Los Angeles Rams. The owner thought it wise to fire the head coach, who recently signed a contract extension, at midseason, on a Monday, before a Thursday night road game against the division leader.

In the absence of any fruitful explanation for this breathtaking nincompoopery, we must assume either that 1) the owner, Stan Kroenke, is auditioning for the new Cabinet, or 2) he did not want the shame of association with the losingest coach in NFL history.

Sunday, Jeff Fisher tied Dan Reeves for most losses, 165, in NFL annals. So offing him now, despite a complete cluster regarding the work week, keeps the tie intact. While that may seem a trifle, never underestimate the sensitivity of egos belonging to billionaires.

There is a third possibility, one more pertinent to the Seahawks, who host the Rams at the Clink.

Consider that Rams players who liked Fisher are going to play mad. The players who didn’t like Fisher will play mad, too, because the maneuver just made a hotter mess of a season already scalding. And the players who have no emotional investment will have a national audience, which likely includes the next head coach, to entertain with unexpected feats and deeds.

Fury could well be on the side of the Rams. For whatever that’s worth.

Then there are facts.

The Rams have won three in a row and four of the past five games against the Seahawks, including 9-3 this season in the Rams’ first home game in Los Angeles in 21 years. And the Seahawks are coming off their worst loss in six years, a 38-10 loss in Green Bay, suddenly searching for answers to questions they never knew they had.

Regardless of who is calling the shots — special teams coordinator John Fassel, son of longtime NFL coach Jim Fassel, has been named interim coach — the Rams players know they own Seattle, even if the rest of the world thinks the franchise is part of the Great Pacific Garbage Patch.

Seahawks coach Pete Carroll had every right to clap hands and say “Whee!” over the fate of a coach who had his number like no other, especially when it came to play-calling exotica. Of course, such expression would be bad manners, and Carroll tends to lean toward the gracious — Jim Harbaugh excepted.

Carroll also sounded as if he thought the change would mess things up for the Rams.

“That’s tough news,” he said at his Monday post-mortem. “I can’t even imagine what that does for those guys, in terms of turning the corner and moving ahead. I’m sure that they’ll do it and John will do a good job of directing that. He’s a terrific coach.

‘That’s a big transition. They’ve kind of been a team in the midst of a lot of transition with their move (from St. Louis) and all the things they’ve gone through. This is kind of more of it.”

Maybe so. But the Rams are coming off their own debacle, trailing 42-0 at home before losing to the Falcons 42-14, their third consecutive lopsided defeat. The Rams are 4-9, the sixth consecutive losing season under Fisher, whose best record since his 2012 hire is 7-8-1.

What have the Rams players got to lose? Play all out, smash up the little No. 3 as they always do, then flip the bird to all the snickering classes by upsetting the haughty Seahawks for back-to-back season sweeps.

If the Rams can’t get fired up for this smackdown, well, they might as well be the 49ers.

Post-game Sunday, under-utilized former No. 1 pick RB Todd Gurley was asked what the Rams could do to get back on track. Here were his exact words:

That conveys a depth of know-nothingness rarely seen outside of Congress. But by late Monday morning, Gurley and his teammates knew something. They knew that Fisher was no longer an excuse.

The season is now up to them, and they have a new boss to work with in-season.

Beware, Seahawks fans. Look how that formula worked for the Seattle Sounders.

Seahawks down to two RBs

Rookie RB Troymaine Pope had what Carroll called a “severe” ankle sprain Sunday, re-injuring the same ankle that knocked him out of a game two weeks ago. That leaves the Seahawks with two healthy backs, starter Thomas Rawls and rookie Alex Collins.

Rookie C.J. Prosise is still out indefinitely after a broken shoulder blade. The Seahawks might have a hard time pursuing a replacement outside the team during a short week. But they could bring up George Farmer from the practice squad, where he re-signed after being cut.

Collins saw his most extensive playing time with 23 yards in seven carries and three receptions for 33 yards, much of it in the fourth quarter after Rawls was rested in the blowout.