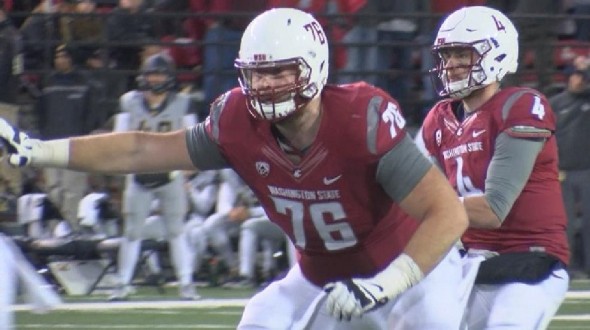 Washington State left guard Cody O’Connell has been named first-team All-America by the Associated Press while wide receiver John Ross and safety Budda Baker of Washington earned second-team recognition. O’Connell is the first consensus All-America for the Cougars since running back Jerome Harrison in 2005.

A redshirt-junior from Wenatchee, WA., O’Connell was also named first-team All-America by The Walter Camp Football Foundation (the nation’s oldest All-America Team) and The Sporting News.

Ross caught 76 passes for 1,122 yards and 17 touchdowns for the Huskies, one TD shy of Mario Bailey’s 1991 school mark of 18. He also scored a touchdown on a kickoff return. Baker recorded 65 tackles and also had two sacks and two interceptions. Both Ross and Baker are juniors.

RB Christian McCaffrey of Stanford joined Ross and Baker on the second team while WR Hunter Dimick of Utah, OT Solomon Thomas of Stanford and LB Jimmie Gilbert of Colorado made the third team.