Thousands of fans gathered downtown and marched with their Sounders to the Seattle Center, home to the original Sounders in the 1970s, for a rally that saluted the first MLS championship for Seattle. 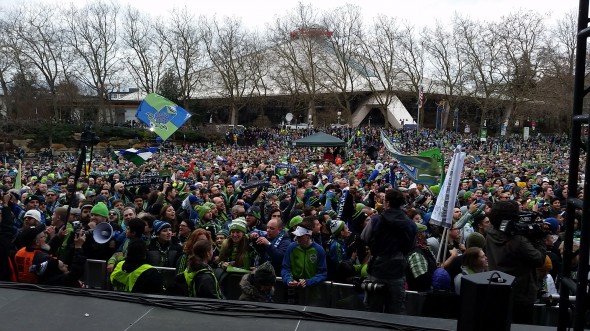 The view from the stage at Seattle Center for the Sounders championship rally Tuesday. / Andrew Harvey, Sportspress Northwest

Sounders faithful flooded downtown streets Tuesday to celebrate Seattle’s first MLS Cup, claimed 5-4 on penalties after a defensive battle in Toronto Saturday. Thousands of fans flocked to the route from Westlake Center north to Seattle Center, where players, coaches and politicians addressed the crowd to hail the white whale that had eluded the trophy case.

The team boarded four trolleys for their procession north, preceded by the Sounders band, Sound Wave. Behind were thousands of fans and members of the Emerald City Supporters, shouting and singing. Players waved and signed autographs as the trolleys inched north.

The procession paused so Ozzie Alonso could honor the statue of Chief Seattle near the Center with an MLS championship scarf.

The Center has deep meaning in Sounders history. The club began play at Memorial Stadium in 1974. When it was decided that the MLS franchise in Seattle would bear the Sounders name, the public announcement was similarly relayed on the lawn outside of the International Fountain.

“Forty years ago, this is where it all began,” Murray said. “Many years of blood, sweat and tears later, here we are.”

Minority owner Joe Roth, who has been kept largely behind curtains since a remark about Nicaraguans and Guatemalans being “cocaine distributors” at a Sounders Alliance business meeting last year, kept his metaphors biblical this time around. He said many assumed the Sounders were Christians against lions ahead of the title match against Toronto FC.

GM Garth Lagerwey walked on stage with a big grin and joked about Seattle’s turnaround after a 6-12-2 start to the year.

“30-for-30 at least, right?” Lagerwey said, referring to ESPN’s popular documentary series. “Who would have thought in mid-July that we’d be here?”

Lagerwey quickly corrected himself, returning to the club’s policy of doubt-free confidence in the system.

“We knew,” he assured the crowd.

The players put on the real show.

Roman Torres danced his signature post-game shuffle. Herculez Gomez jumped off the stage and went crowd-surfing. Jordan Morris thanked fans from his hometown, but pulled away as Torres tried to get him to join in.

Clint Dempsey did not seem to have a plan to address the crowd. But when they began chanting his name, he stepped up and indulged them.

“All I’ve got to say is now that we’ve won one, Portland can’t say s—,” Dempsey said.

Head coach Brian Schmetzer, whose assumption of the job after the midseason firing of Sigi Schmid sparked an 8-2-4 run carried Seattle above the red line and into the playoffs, said he was ecstatic to see his dream come true for his hometown.

“I was overwhelmed, I was impressed, I was very thankful to be a Sounders fan today,” Schmetzer said.

At one point during the parade, Schmetzer hopped off the trolley and walked alongside the fans.

“It’s who I am,” he said. “I like being with the fans. I‘m a fan. It was natural. I’d rather the focus be on the team. I’d rather they get all the accolades. They do all the hard work.”

The celebration wasn’t dampened by the MLS expansion draft, held simultaneous to the the start of the parade. Neither Minnesota United FC nor Atlanta United FC took Seattle’s available players.

The club has summited MLS, and likes the view. A short off-season accelerates the timeline for building a title-defense team, but the club will have renewed energy as it prepares for thr March and the start of another year.

Before the Center rally, a Seattle police officer on a bike was struck by one of trolleys transporting the team. He was pinned under the trolley at the intersection of Queen Anne Avenue and Mercer Sreet. The officer was transported to an area hospital with non-life threatening injuries that included a broken leg.