Thiel: Game of the season for Seahawks’ Wilson

No matter how dreary their seasons, the Rams seem to enjoy battering Russell Wilson. If ever he needed a bounce-back game, it’s this game against these guys. 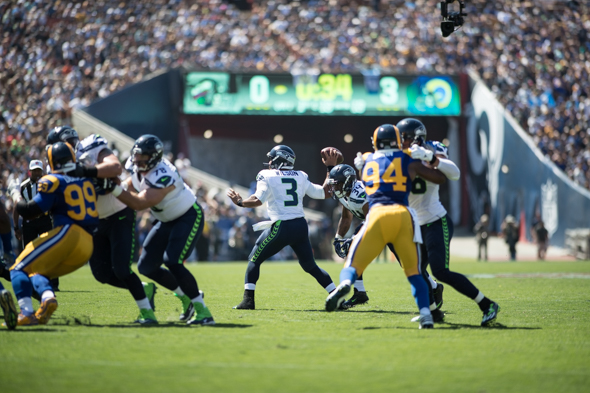 Russell Wilson had a rare moment of clarity against the Rams in the Coliseum Sept. 19. / Drew McKenzie, Sportspress Northwest

For a game this late in the season, team stakes Thursday night (5:25 p.m., NBC/NFL/Twitter) against the woebegone Los Angeles Rams are relatively light, given the Seahawks’ large division lead. But for QB Russell Wilson, it’s his biggest game of the season, and one of the most significant of his career. Because in two of the past three games, he has had, as Richard Sherman might say, a poopfest.

Absent any known health issues, doubts have crept into the conversation among the chattering classes about Wilson. Five interceptions in a single game, most for a Seahawks quarterback since 1999, will do that, especially when it leads to a 38-10 blowout by the Packers. Three weeks earlier in Tampa, he commanded the offense to three points against a statistically mediocre Bucs defense.

To deepen the drama beyond the standard peskiness of a short week, Wilson meets the team that so often has clobbered him with every implement found in the kitchen, basement and barn.

Yes, the 4-9 Rams are traumatized by the Monday firing of their head coach. But the emergency replacement, John Fassel, doesn’t need much experience to hold up a Wilson photo in front of his pass rushers and shout, “Fetch!”

As to the biggest question: What in bloody hell happened to cause five picks in a game when Wilson had two in his first 342 pass attempts this season? Here’s how those closest to the situation responded this week.

Offensive coordinator Darrell Bevell: “We could go through each one. I’m not going to get into it, because we really have moved on.”

Head coach Pete Carroll: “I know you want to know reasons. I don’t know. That’s the way it went.”

As you can read, that was a collective nervous cough that could be measured in megatons. For a team as ultra-competitive as the Seahawks (the most competitive in NFL history, according to Steve Rudman’s research) being so non-competitive for an entire game is a soul-burner, but a pain they choose not to share via interview or Hallmark card.

Certainly, having three of the balls bang off normally reliable receivers is partly to blame. But Wilson had heaves that had no chance to go off anyone’s hands, as well as dinks that stunk.

One plausible theory is that Wilson over the past two seasons has been belted so often, thanks to the world’s least-invested offensive line, that the toll is adding up, particularly after separate ankle, knee and chest injuries left him semi-incapacitated. But if he isn’t going to explain one game’s worth of interceptions, he’s not going to discuss a case of the chronic yips.

Bevell did allow as to how Wilson, unlike the Terminator he aspires to be, does have a flicker of anger occasionally.

“There’s five interceptions that happened. So I just kept talking to him about coming back. That’s gone. We just have to keep moving on.”

The ability to learn from, and then accept, errors is a fundamental in any highly competitive experience (although in rock climbing, it tends to be more of a one-and-done thing). Wilson through five seasons has shown a remarkable ability to avoid slumps lasting more than a game because of his ability to avoid staring into the rear-view mirror.

“From years ago when we got him here, he has had the demeanor that it’s the next play,” Carroll said Wednesday. “I think he’s mastered that skill. It’s a hugely valuable skill for a guy playing quarterback in this league.

The virtue is of acute value Thursday. The biggest entertainment the Rams seem to have in their otherwise dismal seasons is putting him in an airplane spin and smashing him to the mat. Piqued by his own misplay, Wilson is perhaps in the mood to believe the Rams are due for a poopfest of their own.