Russell Wilson threw three TDs and the Seattle defense recorded five sacks in a 24-3 victory over the Rams that clinched the NFC West title for the Seahawks. 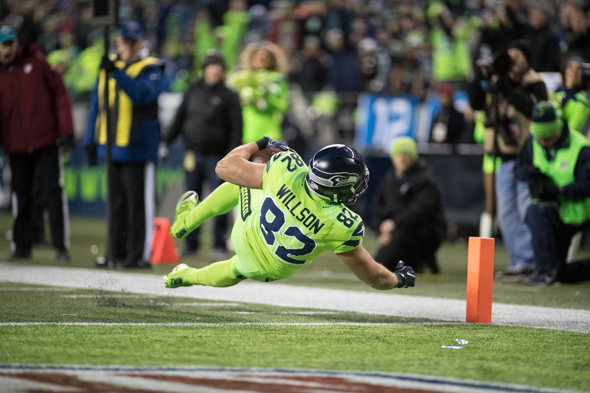 Russell Wilson responded to his five-pick calamity in Green Bay by throwing three touchdown passes with only one late, meaningless interception to mar his performance as the Seahawks shook off a slow start and methodically beat down the Los Angeles Rams 24-3 Thursday night at CenturyLink Field (box). The Seahawks (9-4-1) clinched the NFC West and momentarily regained the NFC’s No. 2 seed.

Looking to beat Seattle for a fourth consecutive time, the moribund, 4-10 Rams, losers of eight of their previous nine, trailed 10-3 at halftime as they held Seattle to 15 rushing yards. But Wilson threw a pair of touchdowns overlapping the third and fourth quarters. Coupled with an outstanding effort by the Seattle defense, the Seahawks took their third division title in four years. They also eliminated the Arizona Cardinals from the postseason.

Had a few plays gone differently, the outcome might have been different. Rams WR Michael Thomas dropped a sure TD pass in the first quarter. Rookie QB Jared Goff had a wide-open WR Brian Quick in the end zone for another TD, but missed badly with his throw. LA messed up several special-teams plays, including a short-armed throw on fourth-and-one at their own 30 by punter Johnny Hekker that set up a Stephen Hauschka field goal.

Playing under interim head coach John Fassel, who replaced the ousted Jeff Fisher Monday, the Rams were still in contention as the third quarter wound down.

With 4:03 remaining in the quarter, Seattle leading 10-3 and poised to score a TD on the Rams one-yard line, Wilson threw to TE Jimmy Graham inthe right corner of the end zone. Graham caught the ball, but it was wrestled away by Bryce Hager. Officials ruled an incompletion, but the Rams challenged, arguing — with good reason — for an interception. But the challenge was denied. Two plays later, Wilson hit WR Doug Baldwin for a wide-open TD to give Seattle a 17-3 lead.

Wilson completed 19 of 26 for 229 yards and finished with a 122.1 rating, his best mark in weeks. His TD to Lockett was his longest of the season, eclipsing the 42-yarder he threw to Tanner McEvoy against the New York Jets Oct. 2.

Lockett caught seven passes on eight targets for 130 yards and Baldwin had five catches on six targets for 35 yards. On his touchdown, his sixth, Baldwin faked out CB Troy Hill at the line of scrimmage so thoroughly he had a five-yard separation when he caught the ball on a play that started six inches from the end zone.

The Seahawks gained 72 yards rushing, including 34 on 20 carries by Thomas Rawls, but that wasn’t bad against a defensive front that has always given Seattle problems.

The longest run of the game was a 26-yard dash by punter Jon Ryan on fourth-and-two with 5:22 remaining. Ryan was leveled and fumbled at the end of the play, leaving to enter the concussion protocol (Seattle recovered the fumble after a Rams challenge).

The Seahawks had 299 yards of offense and controlled the clock for 32:31.

The Seahawks held the Rams to 172 yards on 56 plays, an average of just 3.7 yards per play. The secondary limited Goff, the No. 1 overall pick last spring, to 135 yards on 13 of 25 passing. The defensive line trashed him with five sacks. CB Richard Sherman finally knocked Goff out of the game in the fourth quarter with a devastating hit on the sidelines.

The Seahawks held the Rams to 47 rushing yards, 38 by Todd Gurley, who collected 22 of his 38 on one carry in the first half.

“I’m fired up we got to clinch the division in front of the 12s. Our defense had a great, great night. We rushed the passer, kept the running game down. It worked out really well for us. It was a nice bounce-back game for Russell Wilson. He showed you who he is and what he’s all about. Tyler Lockett looked great. This was a championship night.” — Seahawks head coach Pete Carroll

“They were tough again and their defensive line is unbelievable. But our guys  — Doug Baldwin, Tyler Lockett — made some big plays and our defense played lights out again. To win the NFC West here at home is great.” — Wilson

“Our coaches did a great job of getting us in position to win this game, and now we are NFC West champions. We realized what was at stake. We didn’t have a great game last week, but we did a great job of throwing that aside.” —  Lockett

The Rams not only defeated the Seahawks three consecutive times, but four of the past five meetings. The Seahawks improved to 22-15 in the all-time series . . . The Seahawks are 19-3-1 in prime-time games under Carroll and 34-5 at the Clink since 2012 . . . Wilson notched the 55th win of his regular-season career, one shy of Matt Ryan’s record of 56 for the most in the first five seasons of a career . . . Hauschka extended to 17 the consecutive games in which he has kicked a field goal, an ongoing club record . . . Seattle is 14-2 in its past 16 December home games.

Seahawks players Thursday selected S Kam Chancellor as the 2016 Steve Largent Award winner, presented annually to the player who “best exemplifies the spirit, dedication and integrity of the Seahawks.” Chancellor also received the award, named in honor of the Seahawks Hall of Famer, in 2014.