The mysteries around Russell Wilson’s accuracy and the defense’s pass rush were addressed, and the Seahawks, decked out in Grinch green, spoiled the holidays for the Rams. 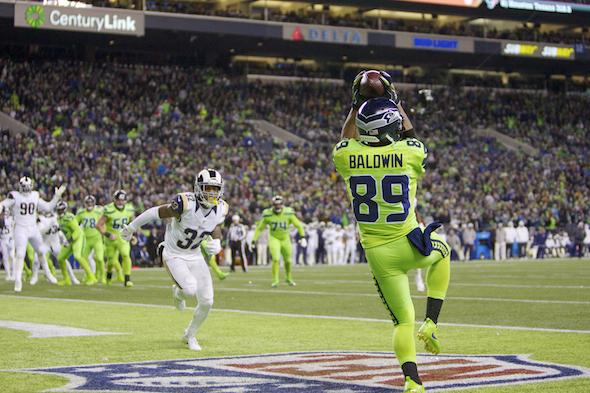 Entering the game Thursday against the Rams, the Seahawks were worried about two faltering aspects of their enterprise: QB Russell Wilson’s passing accuracy and the pass rush.

Well, there was a third thing: Uniform color. Wearing fashion borrowed from the love child of the Grinch and Mr. Yuk is no way to appear on national television. It’s hard to measure the impact of “Action Green” on the outcome, but the national cost in retina damage will plague a generation of fans.

What was certain was that the Seahawks indeed improved the air game and also bashed rookie Rams QB Jared Goff sufficiently that some lost dignity was restored. Oh, and the 24-3 win clinched the NFC West title.

Even if the rest of the division was the sick man of the NFL, last week’s 38-10 loss in Green Bay, the worst in the era of Wilson and coach Pete Carroll, induced a little humility in a team not known for a vast reservoir of humble.

Some order, it seems, was restored.

“Huge significance,” Carroll said of winning the division at 9-4-1 with two games left against Arizona and San Francisco. “It’s something we really do take pride in. We continue to show that we’re up there.”

The path to the division title was, he admitted, strange.

“It’s been different than any of the other years we’ve had,” he said. “Other teams in the division have struggled. So it made (the title) available to us . . . even having four losses. Think about how so many games have been so close, save the Packer game. We’ve just been out front the whole time.

“The good part about it is that we have a couple more games left and we can continue to work at it and see if we can develop some momentum.”

That may be useful because the win Thursday wasn’t all that persuasive. They were up only 10-3 at the half, and this was, well, the 4-10 Rams who fired their coach Monday. LA has a very good defense, but an offense that was even more an eyesore than the Seahawks’ wardrobe malfunction.

Since the Rams beat the Seahawks 9-3 Sept. 19 in the shoddy return of the NFL to Los Angeles after a 21-year absence, they have changed quarterbacks and head coaches. Neither has worked out yet.

The switch to Goff, the draft’s No. 1 pick from Cal, instead of veteran Case Keenum, established why former head coach Jeff Fisher didn’t want to do it at all. Goff (rhymes with off) was 13 for 25 for 135 yards, with a directional malady mystifying in its breadth and depth.

But the Seahawks’ four sacks may have had something to do with his yips, well before a blast that forced him from the the game in the fourth quarter.

As he closed on the end zone after a 25-yard scramble, Goff intersected with CB Richard Sherman, running full speed from the other side of the field. Cleanly, Sherman blasted him out of bounds so hard that the referee ordered him checked. He walked off the field and into the concussion protocol.

“Most quarterbacks are going to step out of bounds, since they usually take their yards and concede,” Sherman said. “He looked like he was setting up to take a dive into the end zone. We don’t give free meals, so he had to feel it.”

As for the Seattle quarterback, Wilson made a case, against his most nettlesome nemeses, that he had awakened from his five-interception nightmare against the Packers. He had three touchdown passes, including a 57-yard beauty to WR Tyler Lockett that ended the element of competition early in the fourth quarter.

He finished with a 122.1 QB rating only because his final pass of the game was a wounded duck picked at the goal line. “That,” said Carroll, “was nuts.” Otherwise he was 19 for 25 for 229 yards, and absorbed only two sacks for a combined loss of two yards.

Relative to his other recent games against the Rams, who had beaten the Seahawks in four of the previous five meetings, the effort was majestic, especially after the Packers debacle.

“You’ve got to have amnesia,” Wilson said, explaining the quick turnaround in a short week. “I didn’t hang on it too long. I know and believe who I am.”

What he and his teammates also are, are division champs, which means at least one home game in the playoffs. If they can advance from the No. 3 seed to No. 2 in the next two weeks, they will get a first-round bye. That means they will need to win only one home playoff game to advance to the NFC championship.

After a 38-10 loss, the path didn’t seem so apparent. But now, despite the unfortunate retina damage, things have cleared up.