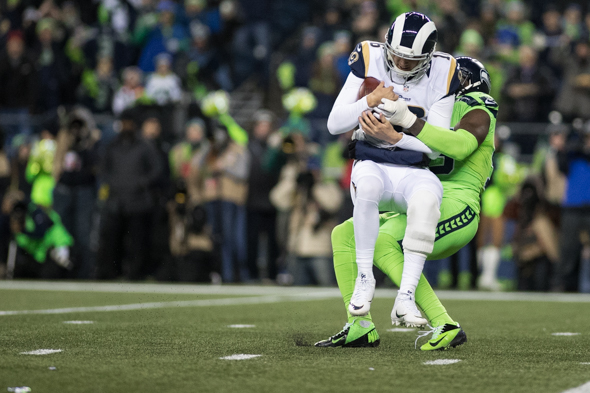 DE Frank Clark was one of many Seahawks to throw Rams QB Jared Goff to the turf Thursday night. / Drew McKenzie, Sportspress Northwest

Battering the Rams rookie QB, Jared Goff, like a tetherball, sacking him four times for a loss of 31 yards and hitting him an additional seven times, the Seahawks defense recovered neatly from the Green Bay debacle with a trouncing of Los Angeles, 24-3. DE Cliff Avril reached a single-season career best of 11.5 sacks after a solo hit and an assist.

The punishment of Goff reversed a downward trend for Seattle (9-4-1), which managed just one sack over the past three weeks after leading the league through week 11. The Seahawks managed a mere 10 quarterback hits in games against Green Bay, Carolina and Tampa Bay.

Avril dispelled the idea that anything mysterious prevented them from getting to the quarterback.

In addition to helping clinch the NFC West and a fifth consecutive playoff berth, Avril’s on-field destruction will lead to off-field creation for the less fortunate. For every sack he records this season, Avril will build a house in Haiti for those affected by natural disasters.

After falling to 4-10 and firing head coach Jeff Fisher Monday, the Rams might qualify for a little disaster relief.

Hosting the faltering Rams certainly gave the defensive front a boost. Still, the level of smackdown was remarkable.

Avril was eager to get to Goff early and often.

“No quarterback likes to get hit,” Avril said. “Make him feel the pressure, get him worried about moving his feet. He’s thinking more about the rush than the guys downfield.”

Goff was clearly affected, going 13-of-25 for 135 yards and a passer rating of 67.9. Following a brutal blast after a 25-yard scramble near the sideline by CB Richard Sherman in the fourth quarter, Goff left the game under the NFL’s concussion protocol.

Goff wasn’t the only victim of head trauma during the final quarter. Seahawks DE Michael Bennett received an unsportsmanlike conduct penalty after sacking Goff and receiving a 15-yard penalty for a Key & Peele style triple hip-thrust.

The next play, Bennett fought off a block and slammed into RB Todd Gurley for a loss of two. Bennett crumpled after his head made contact with Gurley’s shoulder. He required help to get back to his feet before walking off the field. The post-game diagnosis was a wrenched neck, not a concussion.

Bennett did not speak to reporters after the game, but was in the locker room joking with teammates about his celebration.

“I haven’t seen anything like that, especially from a defensive lineman,” Clark said. “I take a lot of pride in being a hard hitter, but everything with us is usually short contact. To see him come off (the block), make a play that fast, it was nice to see.”

Did he expect the flagged celebration for Bennett’s antics the play before?

“I knew it when I realized he didn’t have a sack for the last seven weeks,” Clark said. “It’s great to see Mike out there doing what he does best, getting sacks and dancing.”

Coach Pete Carroll tried to explain the foul Bennett dance, then throttled back.

“I gain nothing by having any fun with this moment,” Carroll said, grinning. “So I don’t know. I do have an understanding (of the rule), I’ll tell you that.”

Clark grabbed a sack and a half of his own while he, Bennett, Avril, and DE Cassius Marsh all also recorded a tackle for a loss as Seattle dropped the Rams behind the line of scrimmage eight times for 19 lost yards.

Clark claimed that the Seattle pass rush had no equal on the planet.

“We’re the best in the world at this,” Clark said. “There isn’t any other group that you can bring that is going to rush the passer like us and is as consistent as us. A lot of these teams, they know we’re coming. They know they’re going to get the best from us, and we want that challenge. We expect it. We’re not going to stop coming.”

Punter Jon Ryan finished as the Seahawks’ second-leading rusher and recorded the longest run of the game, a 26-yard fake punt scramble up the middle on fourth down while Seattle led 24-3. He also finished the game in the locker room, undergoing evaluation for a concussion as a result of his run.

Near the end of his run, Ryan momentarily lost control of the ball as he switched hands. The ball squibbed above his head and he hauled it back in while going to the ground. But he received a helmet-to-helmet hit as was tackled. Ryan lay motionless for several moments, before eventually being helped to his feet and walked off the field.

Carroll said Ryan had a concussion and was sent to the hospital.

“We’re going to check him out,” Carroll said. “He was pretty loopy, so it’s unfortunate.”

Carroll said that the fake was a designed run, rather than an improvisation on Ryan’s part.

“We looked for it all night,” he said. “Brian Schneider (special teams coach) and I were talking about it the whole night. It didn’t matter what the situation was, we were going to do it.

“Going into the game, I was hoping we would get the chance because I thought we were going to need the rushing yards, to tell you the truth.”

Ryan’s status is unclear as Seattle prepares for week 16 matchup against the Arizona Cardinals, But his wife, comedian Sarah Colonna, tweeted from the hospital that Ryan was in good spirits.

Thank you so much for all the well wishes. Jon is being checked out but in good spirits. You guys are so nice. ❤❤❤ pic.twitter.com/nJlsiXSnjd