CB Richard Sherman had a sideline confrontation with coaches over goal-line play-calling. If he hadn’t said the right things in a Friday meeting with Pete Carroll, he may have been punished for insubordination. 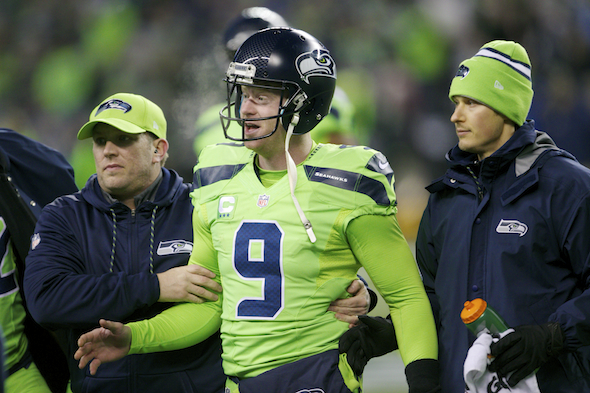 Punter Jon Ryan was hospitalized after being hit in the helmet on a 26-yard run from punt formation. / Drew Sellers, Sportspress Northwest

Richard Sherman did an impulsive, foolish thing on the sidelines Thursday that wasn’t picked up by TV cameras: The Seahawks’ star cornerback challenged coach Pete Carroll and offensive coordinator Darrell Bevell on playcalling, engaging in a shouting match that required teammates and coaches to step in.

With the Seahawks ahead 10-3 late in the third quarter and first and goal at the Rams’ 1-yard line, QB Russell Wilson threw a fade into the end zone to TE Jimmy Graham that was caught but nearly ripped from his arms by Rams LB Bruce Hager. The pass was ruled incomplete. The Rams challenged the call but Graham was ruled out of bounds before he lost the ball.

No Seattle harm came from the play, but because it invoked the most notorious moment in Seahawks history, the interception by New England’s Malcolm Butler that denied Seattle a likely Super Bowl victory from the one-yard line, Sherman was aghast and angry.

After the game, he didn’t shy away from explaining himself.

“I don’t like it when we throw the ball at the one,” he said. “We throw an interception at the one — luckily it went incomplete and I wasn’t going to let them continue to do that.

“I was letting Pete know. I was making sure Pete knew that we’re not comfortable with you throwing the ball at the one.”

Friday morning, in a one-on-one meeting in the coach’s office, Carroll let Sherman know he was out of line. The player’s response was going to determine whether there was punishment.

Asked if the confrontation was an act of insubordination, Carroll said, “I think if we weren’t able to come back from that, I think so. It would depend on how the meeting went. The meeting went very well and it was very clear.

“I know the guy I’m talking to. I know him as well as you can know a guy. I know how he feels about it and I’m fine about what happened. That doesn’t mean that it was OK. That doesn’t mean it wasn’t something that needed to be addressed. We went right after it, and I was going to make my decision on how to move forward based on what happened and how we communicated.”

On the field sequence, the Seahawks did try a run on the following play, but FB Marcel Reece was stopped for no gain. On the next play, Wilson again threw, this time to a wide-open WR Doug Baldwin in the flat for a touchdown in a game the Seahawks won 24-3 to clinch the NFC West title.

That made for a celebratory mood in the locker room. But Sherman drew the biggest crowd of reporters seeking explanations for a second sideline confrontation he ignited. In the game against Atlanta, he had a televised run-in with defensive coordinator Kris Richard over missed assignments. Carroll claimed the incidents were distinct.

“Two totally different incidents,” he said. “This guy cares as much as you can care. It doesn’t mean he does everything right all the time and it doesn’t mean he’s bad because he does make mistakes.”

Asked whether he was confident there wouldn’t be another Sherman blow-up, Carroll said, “No. I wouldn’t say confident. I don’t know. I love this guy and I love who he is. I love what he’s all about and the man that he’s grown to be and going to become.

“These are all great lessons and opportunities to learn. He has a lot to offer the world. I’m proud to say that he’s growing, he’s learning and he’s getting better. This was a good instance for him to check it and figure it out and how to make the right decision.”

After the game, Sherman showed no contrition.

“One hundred percent,” Sherman said regarding whether it was his place to speak up about the offense. “We go out there. We battle. We don’t give away our battle. You honor our sacrifice.

“I’d rather do what most teams would do, and make a conscientious decision to run the ball straight up the middle.”

The irony in that remark is that the Seahawks do many things other teams don’t do, including indulging eccentricities and outbursts by players such as Sherman. It may look bad to old-school disciplinarians, but Carroll’s method coached five productive years out of rebellious RB Marshawn Lynch, and has won over contrarians such as DE Michael Bennett and the tempestuous WR Doug Baldwin.

Carroll does have his limits. Ask WR Percy Harvin.

Sherman would do well to find limits too. The 53-man roster carries no room on it for players to mind each others’ behavior. Opinions are welcome, but not at first-and-goal.

After describing Jon Ryan after the game as “loopy,” Carroll had no update on his punter’s condition Friday. Ryan was hospitalized with a concussion following a helmet-to-helmet hit on his controversial run from punt formation with 5:22 left in a game well in hand.

Ryan’s wife, comedian Sarah Colonna, tweeted Thursday that he was OK. But many fans were puzzled over the decision to risk the punter’s health on a meaningless play, especially after Carroll said the Seahawks “needed the rushing yards.” His 26-yard gain, the game’s longest run, helped give Seattle 72 for the game.

“This is a subject that’s kind of fun,” Carroll said. “I’ve been around this subject before. We had a tremendous preparation for an opportunity (against the Rams punt return team) to take that we knew could be like a turnover in the game. If we could get the opportunity, we would go for it. It didn’t matter when it happened. We were looking for it the whole night.

“It gave us a chance to hold onto the football and not give them even the chance to get the ball back. What more could I do to help my team? How it gets perceived — that’s what you guys get to talk about. I think it’s a waste of energy, but I understand it. I don’t expect that you can see it from our perspective.

“It worked perfectly, except for the end of it was terrible. But that allowed us to keep the football. It didn’t have anything to do with something with the score or anything, just trying to finish the game as well as we could.”

On his previous rush, a misplay against Minnesota in the playoffs last season, Ryan ran spontaneously and was tackled awkwardly, landing face-first and breaking his nose.

If Carroll ran the play as a threat to opponents scouting Seattle, the tendency revealed is one of self-destruction. But he wasn’t taking it too seriously.

If Ryan can’t go in the run-up to the Dec. 24 game against Arizona, Carroll joked he might run “a punt, pass and kick competition” for replacement candidates.