Star RB Christian McCaffrey is skipping Stanford’s bowl game so he won’t get hurt in a pointless exercise ahead of the NFL draft. Coaches bail on bowl games all the time; why not players? 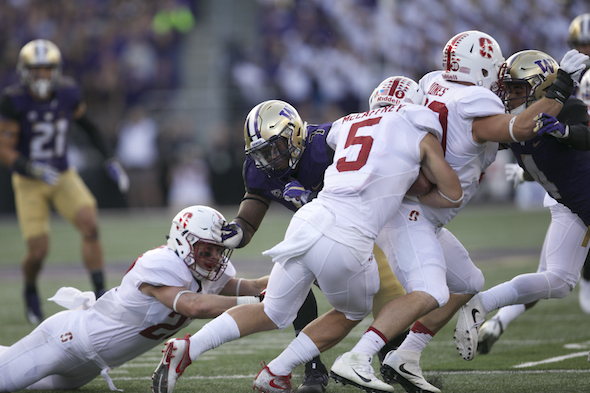 With the college football exhibition season inflicted upon us, and before we get to the only three postseason games that matter, it is a worthy moment to salute Heisman Trophy-caliber RB Christian McCaffrey, who made a business decision Monday to sit out Stanford’s Sun Bowl game against North Carolina. That Stanford education may be worth something, after all.

He recognized that there is nothing for him to gain, nor for the Cardinal team generally — the payouts by most bowls to schools barely cover expenses of the trip, and the game outcome is mostly meaningless  — from a week in the desert chill of El Paso. A junior certain to go high in the NFL draft, McCaffrey tweeted that he has better things to do than risk his neck pointlessly.

Certainly, McCaffrey will face blowback from some quarters where the mythology of bowl games runs thick, but those cesspools will not be populated with either his coach, David Shaw, or many of his teammates.

“We understand that this was a very difficult decision. For three years Christian has not only been a great player, but a great teammate as well,” Shaw said in a statement. “We wish him great success at the next level, as we continue our preparation for the Sun Bowl.”

In fact, these snubs may be the start of a trend. Friday, LSU’s premier running back, Leonard Fournette, said he was skipping the Citrus Bowl against Louisville to prep for the draft.

Both were injured for a time this season. Their agents/parents also probably knew about the tale of Notre Dame LB Jaylon Smith in 2015.

In his final game, a meaningless bowl, he was shoved from behind and twisted his knee, tearing his ACL and MCL, plus nerve damage. He was a likely top-five pick who fell, post-surgery, to the Cowboys in the second round. He still earned $4.42 million guaranteed, but played little this season and could have had north of $20 million had he skipped the bowl. His future recovery is still unknown.

From a University of Washington perspective, it is fair to wonder whether premium talents such as WR John Ross and CB Sidney Jones would have stuck around for a bowl outside of the four-team playoff. Since the Huskies are in, and the stakes are high for the national semifinal at the Peach Bowl against Alabama Dec. 31, the players probably had little hesitation in continuing their college careers.

But the mere fact of a playoff system, now in its third season, diminishes even more the already dubious worth of most of the bowls. On the dessert tray, the spectacle of baked Alaska tends to dwarf the after-dinner mint.

For any college player who has been judged worthy of NFL selection in the top five, especially offensive skill players who are most likely to be injured, skipping a bowl game has to be a consideration, now more than ever. Sure, it’s a fun trip, and players don’t want to look selfish abandoning their brothers. But all among them on top-tier college programs have to understand that by now, from an industry perspective, they are chattel.

As for the ticket-buying public, well, it’s a shame that they lose out on seeing star players. But if the Pac-12 championship game was any indication, the lure of these games beyond the immediate fan bases of each school suggests we are dealing with a small cohort of the disgruntled.

On numerous flights into San Jose, the closest big airport to Levi’s Stadium in Santa Clara, Alaska Airlines was giving away two free game tickets to the Washington-Colorado game — two top 10 teams — to every passenger, in hopes of stirring up a crowd on a Friday night in Silicon Valley. Didn’t work. The 71,000-seat park was half full.

Certainly, there can be no complaints about the decisions of McCaffrey and Fournette from coaches and athletics directors. For years, coaches and ADs have hopped from school to school after the end of regular seasons, leaving assistants to take care of speaking at rubber-chicken luncheons given by the host cities to hear themselves complimented for their hospitality by the visitors.

Anyone remember the Washington coach for the Fight Hunger Bowl in 2013?

Marques Tuiasosopo, the quarterback hero of the Huskies’ last Rose Bowl team in 2001, was the assistant Steve Sarkisian left in charge after he dashed from the Huskies to his ill-fated tenure at USC. Tuiasosopo was so honored by the duty that he left his alma mater after the game to join Sark with the Trojans.

Would that the players in college football were accorded such freedom of movement. But at least now, thanks to McCaffrey and Fournette, the best of them have recognized that  receiving the Fight Hunger Bowl watch in their gift swag bags isn’t quite the thrill it once was.

If this shrug becomes trendy in the next few years, wholesale recognition these games are the football equivalent of baseball’s spring training might drain the swamp to a more manageable 25 or so bowls between 6-6 teams. ESPN will be the poorer for it, which only enhances the value proposition.