Thiel: Seahawks’ Sherman, defiant as ever

Seahawks CB Richard Sherman offered no apology for his sideline rant Thursday, although if he knew the facts about the Seahawks history from the one-yard line, he might not try so hard to win the argument. 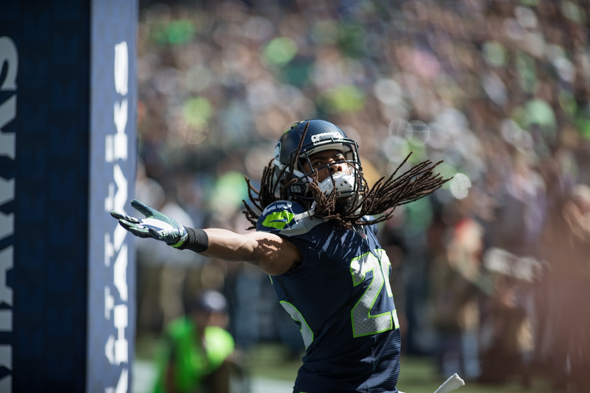 Richard Sherman doesn’t feel compelled to back down from his sideline rant. / Drew McKenzie, Sportspress Northwest

No regrets, no remorse, no apology.

CB Richard Sherman remained true Tuesday to his sideline tirade during the Rams game, when he yelled and pointed fingers at coach Pete Carroll and offensive coordinator Darrell Bevell for calling a play that reminded 8,231Sherman of the one that cost the Seahawks the Super Bowl.

Back in the day, we called that an acid flashback. In the context of Seahawks football, it was over-reaction Thursday followed by under-reaction Tuesday.

“People need something to talk about this week,” Sherman said. “Y’all talk about that. The way our team works, it worked out fine.”

Maybe so. The Seahawks have navigated worse — Percy Harvin punching out teammates and disobeying orders, Marshawn Lynch abruptly pulling out of the playoff trip to Minnesota. But those guys are gone, and Sherman figures to be around a good long while.

Sherman passed on the chance for contrition in favor of pride, justifying his stubbornness by hiding behind coach Pete Carroll’s mantra for avoiding potentially damaging misbehavior: Protect the team.

Wasn’t your public rant potentially punishable? Said Sherman: “No. Because what’s our rule? Protect the team. That’s our rule. It goes both ways. That’s what me and Pete talked about.”

That was a reference to Carroll’s day-after one-on-one with Sherman in which Carroll indicated he needed to hear the right words from Sherman to avoid sanction.

What those words were weren’t clear, but according to Sherman, none was “sorry.”

At his weekly presser, Sherman handled nearly a dozen questions about the incident politely, if tersely. Near the end, ESPN’s 710 Jim Moore asked a pointed but fair question: Did Sherman think he had “a better handle” on offensive play-calling than Bevell.

Moore said no, and Sherman said, “Then you should probably kind of stop.’’

As Sherman walked off the stage and passed by a seated Moore, he said, “You don’t want to go there. You do not. I’ll ruin your career.”

Moore: “You’ll ruin my career? How are you going to do that?”

Sherman: “I’ll make sure you don’t get your media pass anymore.”

Said Moore: “Is that right?”

Sherman, continuing to walk: “Yes, it is.”

As media dust-ups go, this was a minor episode. I’ve been around much better, including one with Moore years ago during the Sonics playoffs with Gary Payton that ended up chin to chin. But that story is for another column.

The episode did demonstrate how self-righteous Sherman can be. He later tweeted out an apology that seemed as if it came straight from the Seahawks PR staff:

I appreciate the role the media plays and they have a tough job. I let it get personal today and I regret that. Next one should be fun

However insincere the tweet was, Sherman would have better spent his social media time getting back in gear with the team. Teammates will always defend his play and persona, but they also know he gets full of himself. Or as Bevell put it Tuesday, smiling:

“I’m not going to convince Richard of anything. I’m just comfortable, really, of how the conversation went. I thought it was a good conversation.”

Since the infamous pick by New England’s Malcolm Butler that sent the play into the pantheon of catastrophic sports outcomes, Seahawks QB Russell Wilson has attempted three passes from the opponents’ one-yard line. Two went for touchdowns, including one to WR Doug Baldwin Thursday, two plays after an incompletion/near-interception to TE Jimmy Graham that prompted Sherman’s knee-jerk response.

The third was a TD pass to Graham against Carolina Dec. 4. Neither TD pass drew Sherman’s ire.

He was asked, in light of events, whether he would have the same reaction if another pass was attempted from the one, he said, “I don’t know. I’d have to see it. If I did . . . I’m not one to hold.”

That answer suggests that Sherman is more into winning the argument than winning the game. He needs know that since that Super Bowl, the Seahawks have run 15 plays from foes’ one-yard line. They scored on eight, including six rushes, besides the pair of passes. So it appears that the Seahawks’ offense is functioning fairly well without Sherman’s input.

For his part, Bevell naturally said he took no insult from Sherman — not surprising, since he’s been flipped off from the field by Lynch and Baldwin, and castigated on Twitter by Lynch’s mother, Delisa, as well as many thousands of fans who claim to know the Seahawks offense better than he does.

“I think the thing that we do really well here, that (Carroll) always talks about, is we celebrate our players and the uniqueness that they have,” Bevell said. “But I think that there are repercussions when they step over the line.

“That’s not for me to handle. That’s for coach to handle. I’m comfortable with all our guys. I love the fiery nature.”

Sherman fell back on a staple of his view of the world outside the Seahawks: That people who haven’t played or coached can’t know what they are talking about.

“Our team is a lot different than other teams,” he said. “The public just needs an opinion, a criticism. They don’t understand. That’s why most people can’t even get to this point of success.

“Most people live their lives with a foot on the brake, hoping not to run into people. (Players) live our lives with the foot on the gas, trying to search for success. We push the limits, we push the envelope. We are competitors. We know what it takes to get to the mountaintop. Most people don’t understand that. It’s hard to comprehend what’s going on. It’s not hard for my teammates, because we see eye-to-eye on it.”

Actually, Sherman is mistaken. Just because people haven’t been president, or a cop or a fireman, doesn’t necessarily invalidate their opinions on quality of jobs being done. You don’t have to be Martin Scorsese to know whether a movie was good or bad, or to ask good questions about it.

Even Sherman is unlikely to have been aware of the Seahawks’ ratio of play calls on the one, although he does share the same Super Bowl nightmare with the entire Seahawks fan base.

But one would think, given all his knowledge of and experience in the game, he would know better than to act like the fan he disparages.