Amid continuing chatter about CB Richard Sherman’s behavior, the Seahawks also made a noteworthy personnel move by putting Garry Gilliam back at right tackle. Again. 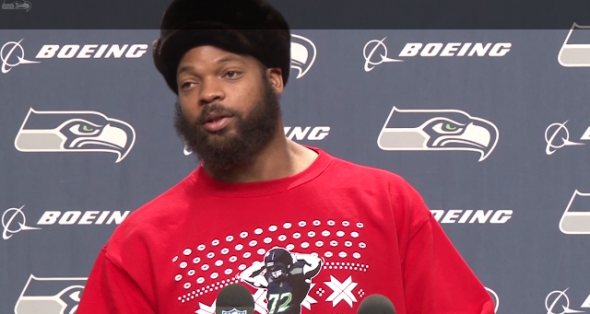 DE Michael Bennett was styling Wednesday in a fur hat and a bad Christmas sweater bearing his image. / Seahawks.com

In case you thought things may be a little too serious around the Seahawks lately, DE Michael Bennett, dressed in a Black Santa sweater featuring an image of him doing his pelvic thrust sack dance, came to the rescue Wednesday.

Talking about his celebration penalty late in the Thursday game a that followed his sack of Rams QB Jared Goff, Bennett explained that his teammates let him down.

“Good friends,” he said, “stop friends from doing things like that.”

Bennett was asked to explain his understanding of the rules regarding hip thrust, mocked three years ago by comedy tandem Key & Peele  in their hilarious “Hinkle McCringleberry” sketch.

But he did come up with a succinct summary of the thrust count:

That may be the most insightful interpretation ever offered to the NFL rules committee. The chuckles it induced also helped the Seahawks try to get unwrapped from the axle of CB Richard Sherman’s controversial rant over offensive playcalling in the 24-3 win over the Rams Thursday.

It’s gotten so silly that DE Cliff Avril joined assistant coach Tom Cable in playing dumb about the episode during media interviews. Avril was expansive about his Pro Bowl selection and his friendship with Bennett Thursday, then, when asked about Sherman  mustered a blank look and a shrug, claiming ignorance.

At least Bennett filled in for both when he offered a common-sense resolution that so far has escaped Sherman.

“I think you just have to (question coaches) in a respectful manner. We have to go out there, we make a mistake, and go back and apologize,” he said. “That’s a part of family, being able to have an argument, but be respectful enough to go back and realize that you made a mistake.

“It doesn’t make it a lot easier when everyone around the world keeps harping on it tries to make it to become a problem.”

True, the harping continues, but only because Sherman didn’t have the humility to talk his way out with a simple “my bad.”

Meanwhile this week, there was a development that had actual football implications for Saturday’s home game against Arizona (1:25 p.m., FOX), as well as the rest of the season.  Garry Gilliam will start again at right tackle, beating out Bradley Sowell, who had the job for the past three games but was beaten out this week.

Two things were unusual about that:

Gilliam had been listed as a healthy inactive for the games against Carolina and Green Bay, suggesting a permanent benching after starting 27 games in a row, and . . .

The Seahawks almost never have such an unsettled position so late in the regular season.

“I don’t like it, that’s what it is,” Cable said, when he wasn’t pump-faking the media. “You’d like to be more settled than that, but unfortunately it’s not working out that way for us.

“What is working out, is we’re getting a bunch of guys playing and involved and I think that bodes well moving forward.”

That long-term goal is probably valid, but for this season, the training-wheels portion of the program is booked for August, September and October, not now. But Sowell’s inconsistency against the Rams — the Seahawks rushed for 46 yards from scrimmage — moved Cable to sub him out with Gilliam for the entire fourth quarter.

“I think (Sowell) just being consistent in our system . . . we kind of have gotten away of some things that we have done in our past,” Cable said. “So working on newness and those sort of things. We just want him to be rock solid throughout, from the beginning of the game to the end, without letting up.”

Amazingly, George Fant, the rookie former college basketball player, seems to have locked down the left tackle position that both Gilliam and Sowell couldn’t do.

“It was a wonderful battle inside (against the Rams),” he said. “Our inside three and George really were terrific. We just have to get this (right tackle) kind of locked in the right way. You have to take your hat off to LA, they are very good.”

Gilliam, whose lack of physicality was said to be his biggest shortfall, said the two-game benching didn’t provoke any anger.

“If you allow yourself to get too caught up in that, you kinda mess yourself up,” he said. “To me, it was kind of reevaluating, stepping back, like, ‘What’s really going on? Get out of your own way. Why are they doing this?’

It wasn’t a matter of being angry.  You have to put yourself in position where it can’t happen again.”

Should the same thought occur to Richard Sherman, the Seahawks likely would be delighted, and Avril and Cable will no longer have to pretend.