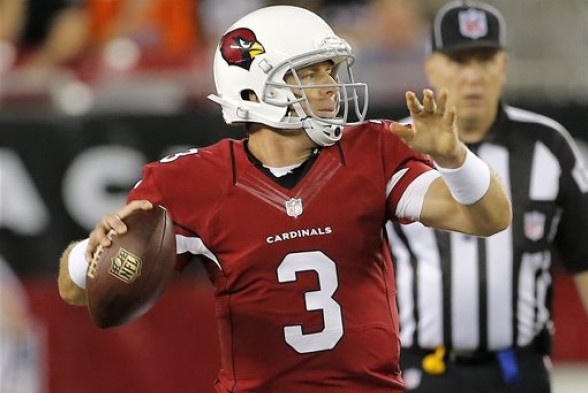 Arizona’s Carson Palmer says the Clink is his favorite place to play. He is NOT in the concussion protocol. / Arizona Cardinals

The NFL schedule is such a bully. Right in the middle of a compelling psychodrama involving CB Richard (“I’ll ruin your career”) Sherman and the role he plays in the Seahawks family (Michael Corleone, Sonny Corleone, Peter Clemenza, Luca Brasi or Johnny Fontane), the calendar insists interrupting it to present a game Saturday (1:25 p.m. FOX).

The NFC West championship has been won, so any Seattle rivalry drama with the visiting Arizona Cardinals has been bled from the game, as it was a year ago, when the Seahawks played a 13-3 team resting starters and won 36-6. This time the disappointing Cards are 5-8-1 and so broken and delirious that their quarterback, QB Carson Palmer, is eager to play at the Clink.

“It’s my favorite place to play,” he said this week via teleconference. “It’s obviously by far the most difficult place to play. But there’s such a great energy in that stadium. The fan base is just spectacular, and it’s a beautiful stadium. I think it’s so cool sitting down there on the water downtown. There’s just so much electricity in that stadium and we enjoy that.

“No doubt it’s difficult there; going to be some offside and some bad plays because that’s what kind of environment that creates. We really look forward to playing there.”

If that wasn’t enough sucking up to the opposing crowd, here’s what Arizona offensive coordinator Harold Goodwin told Phoenix reporters when asked if Seattle’s defense was a different animal:

“This is a very different animal. It’s from outer space. It’s not necessarily an animal, it’s an alien.”

Speaking of the Predator movies’ lead character, Sherman came up again Thursday in coach Pete Carroll’s final presser of the week. He was asked about Sherman’s Tuesday press conference in which he offered no apology or regret for his sideline outburst during the win over the Rams. He yelled and pointed fingers at Carroll and offensive coordinator Darrell Bevell over play-calling.

Asked if he was surprised he didn’t apologize, Carroll said, “I was a little surprised. I thought he would, more than he did. You guys got after him pretty good, and it got to him a little bit. He didn’t really get everything out that he maybe wanted to get out, in the way he wanted to.

“We’ve been together throughout the week to make sure that everything is in the right place for us. We’re fine here. I think these are learning experiences, these are opportunities. We don’t do things right all the time, we make mistakes, we go too far and we have to correct.”

Asked if that correction included punishment, he said, “We’re done with it right now. We’ve already taken care of it. Whatever we do, we do it inside internally and it’s been taken care of.”

Carroll was confident any team damage from Sherman’s rant would be detectable. He saw none.

“It’s pretty obvious to me,” he said. “I’m deep into this thing with our guys and know them well. I’ve been through a lot with them. We’ve handled everything we need to handle.

“I don’t expect everybody to understand that because they’re not a part of what’s going on, and they won’t be. What’s really important is what we’re doing here and our team and our locker room and our relationships.”

Carroll said DE Michael Bennett (neck) and P Jon Ryan (concussion) will likely play Saturday. Ryan still had to pass some tests after practice Thursday, but Carroll was confident he would . . . Regarding the return of Garry Gilliam to right tackle after being benched for two games prior to the Rams game, Carroll said, “He handled it very professionally during the couple weeks. He worked hard in practice in the role that he was in, and he worked hard to battle back. He deserves the opportunity to show what he can do again.” . . .  Asked about the decision by star RB Christian McCaffrey to skip Stanford’s Sun Bowl game to prep for the draft, Carroll said, “I understand why guys do that, and I understand that there is a bit of a trend here that I’m seeing. I don’t really like it. I would like guys to play for their teams and battle for their teams and finish up. I understand why a guy maybe makes a choice to secure his future, or be safer, or whatever. But I don’t agree with it.”