Thiel: Huskies get ‘complete game’ in win over SU

Behind Noah Dickerson’s best game, 21 points and 17 rebounds, Huskies prevailed easily over Seattle U, 94-72, giving coach Lorenzo Romar some evidence for his claim of progress. 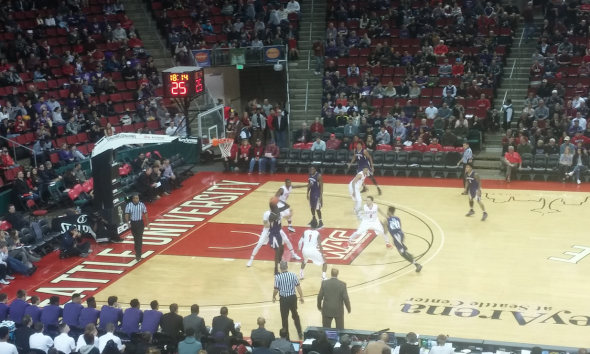 For those who have forgotten, or never knew — a men’s basketball game at KeyArena. / Art Thiel, Sportspress Northwest

Even though it was only December, going into the annual men’s basketball game between the University of Washington and Seattle University Thursday night, the thinking was that this might be loser-out. You know, losing coach gets fired.

In the vacuum of big-time basketball in Seattle, the mind races toward any kind of stakes. Not wishing any ill will on coaches Cameron Dollar and Lorenzo Romar, but with low expectations, crowd (6,163 at KeyArena) and intensity, bad thoughts creep in.

But there didn’t seem to be consequences. The Redhawks (7-6) lost for the ninth consecutive time to the Huskies (7-5) since series renewal, this one 94-72, and Dollar, present for all, was still gainfully employed into the late evening.

Romar at least can muster a little bit of optimism after what was a bleak streak of four consecutive losses. But, having been in a figurative round room for the entire non-conference season now ended, he wasn’t about to announce that a corner has been turned.

“I would stick with the word progress,” he said. “I thought we made progress in the Nevada game we lost. It’s very evident now.”

Progress was not visible Dec. 7 in Spokane, when the Huskies fell behind Gonzaga as soon as they got off the bus, a 98-71 embarrassment marking a nadir in Romar’s 15 years.

After that game, Romar said progress was about to become apparent to all. Then they lost to Nevada 87-85, but beat Cal Poly 77-61 and handily doused Seattle U, the third game in five nights.

The Huskies don’t play again until the Pac-12 Conference opener Jan. 1 at home against Washington State, so they have time to contemplate one definitive positive sign — Noah Dickerson had 21 points and 17 rebounds.

The big man made 10 of 12 free throws and five of eight from the field, including his first three-pointer of the season. The shot from the top of the Key brought the entire Huskies bench to its feet in a rousing ovation.

“I practice it a lot,” he said. smiling. “Shoot ’em in practice. I just needed to see the first one go in.”

The development of Dickerson as a force — the double-double was his fourth of the season — would be large for a team way too dependent on freshman star Markelle Fultz. He sat down early in the first half after foul trouble, but the Huskies managed to pull away despite his absence.

Fultz finished with 18 points and six assists in 31 minutes. His thrill of the evening came in the second half when he stole the ball, fed it ahead on a breakaway to guard David Crisp, who flipped it back to Fultz down the middle for the alley-oop flush.

It roused the crowd almost as much as the timeouts when the sock cannon fired cheap freebies into the stands — another reminder that this rivalry is a notch or two below the ACC spectacles on Tobacco Road.

“David is playing phenomenal basketball,” he said. “He’s become reliable for us. Shooting comes with that, but he’s doing other things that make him a more complete basketball player. More impactful in the game.”

Adding Crisp to Dickerson and Fultz in the category of reliables would be a major uptick heading into conference play, especially after some spasms that resembled good team defensive play.

The Huskies dropped down on the Redhawks’ 7-foot-3 redshirt sophomore center from England, Aaron Menzies, forcing him to miss eight of 12 shots. SU shot 39 percent for the game.

“We talked about using the non-conference schedule to get better and make progress. I think we did that,” Romar said. “But there’s a long way to go. We told our guys tonight we looked like a basketball team, on defense and offense. That hasn’t always been the case this season.

“The way we went about our business made it our most complete game.”

Beating Cal Poly and Seattle did nothing for Washington’s RPI. But no one got fired, and it’s Christmas.