A day after acquiring midfielder Harry Shipp from Montreal, the Sounders sent allocation money to Houston to acquire forward Will Bruin, who has tallied 50 MLS goals since 2011. 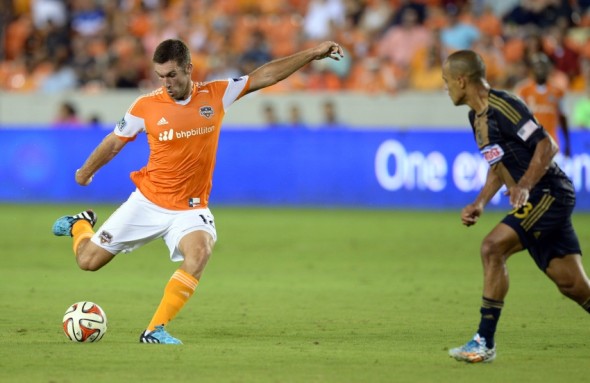 Will Bruin has been a steady scorer for Houston. / Houston Dynamo

The Sounders Friday acquired forward Will Bruin from the Houston Dynamo in exchange for targeted allocation money and general allocation money. The 27-year-old Bruin has spent all six of his pro seasons with Houston, scoring 50 goals and 20 assists, including three double-digit goal campaigns.

“Will is a known commodity as a consistent goal-scorer that we believe can immediately bolster our attack,” said Sounders GM Garth Lagerwey in a statement. “Coupled with the acquisition of Harry Shipp, we’re excited about the impact that these two young and proven players can bring next season.”

Among the more consistent goal-scorers since entering the league in 2011, Bruin tallied a career-high 12 goals in 2012. He also reached double digits in scoring with 10 goals in 2014 and 11 in 2015. Bruin has also scored six goals in 13 playoff appearances, including a franchise-record four in 2012.

He also has two career caps for the U.S. National Team. He made his debut in a friendly against Canada in 2013.

“Will is a good player who brings a unique skill set to our team,” saidWi coach Brian Schmetzer. “I’m looking forward to welcoming both him and Harry Shipp to Seattle and seeing how they compete within our existing group of players.”

A three-year standout at Indiana, Bruin scored 33 goals in 66 appearances for the Hoosiers, including a team-high 18 as a junior, when he finished second in the voting for the MAC Hermann Trophy. Following his junior campaign in 2010, he was selected 11th overall by the Dynamo in the 2011 MLS SuperDraft.