The Seahawks trailed Arizona 31-18 with less three minutes to play, rallied to tie at 31-31, but lost on a 43-yard field goal as time expired to also lose their hold on the NFC’s No. 2 seed. 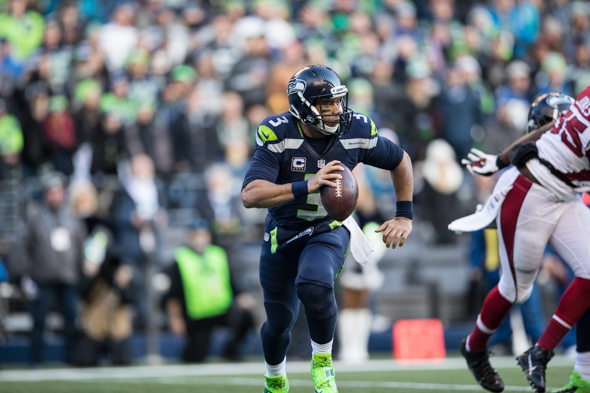 Chandler Catanzaro kicked a 43-yard field goal as time expired, giving Arizona a 34-31 victory over the Seahawks Saturday at CenturyLink Field. After a furious comeback from a 31-18 deficit with 2:50 remaining, Seattle had a chance to take the lead with a minute remaining, but Stephen Hauschka botched an extra point, allowing the Cardinals a final scoring opportunity, and they capitalized (box), a bad blow for the locals.

The Seahawks fell from the No. 2 seed in the NFC to No. 4. They also lost their No. 1 running back, Thomas Rawls, to a shoulder injury (severity undetermined), and their No. 2 receiver, Tyler Lockett, to a broken leg. Lockett, who will require surgery, is out for the season. With one game remaining, Seattle will need help in order to secure a first-round bye.

The Seahawks must win at San Francisco Sunday, then need New Orleans to beat Atlanta to deny the Falcons the No. 2 spot.

Seattle seemed dead when it fell behind 31-18 with four minutes left. Then QB Russell Wilson rallied the Seahawks with two late touchdown passes, to TE Jimmy Graham and WR Paul Richardson, the latter tying at 31-31. But Hauschka couldn’t convert the PAT and Arizona took over with 60 clicks left.

Wilson was under siege throughout an abysmal first half, sustaining five sacks and multiple hits as the Seahawks fell behind 14-3, failing to gain even one yard on seven goal-to-go attempts just before intermission. With far better protection in the final two quarters, finished with four TD passes (and no interceptions): Two yards to Jermaine Kearse, 42 to Doug Baldwin, 37 to Graham and five to Richardson.

Baldwin caught a career-high 13 passes on 19 targets for a career-high 171 yards. With 1,084, Baldwin is the fifth receiver in franchise history to record back-to-back 1,000-yard seasons.

Lockett appeared to catch a 29-yard touchdown late in the first half, but was ruled down at the one-yard line on review. After the catch, Lockett slid under Arizona defender Brandon Williams, who crushed Lockett’s lower right leg. Lockett went face down to the turf and trainers immediately raced on the field. An air cast was placed on Lockett’s leg and he was carted away.

With Arizona’s defensive line dominating, Rawls couldn’t get anything going in the first half — eight yards on eight carries. But Alex Collins gave the Seahawks a boost in the second half, especially on their first drive, rushing for 28 yards on seven carries.

Wilson targeted Graham only three times, but caught two passes for 43 yards. Richardson caught four balls for 42. Kearse’s TD was his first of the year.

The Seahawks couldn’t contain Johnson, who ran for 95 yards and scored three touchdowns and caught four passes for 41 — his 15th consecutive game this season with more than 100 yards from scrimmage, an NFL record.

LB Bobby Wagner recorded 10 tackles to set the franchise record with 155. His total leads the NFL.

An 80-yard TD from Palmer to J.J. Nelson (3 catches, 132 yards) in the second quarter was the longest against the Seahawks this year (66 yards from Aaron Rodgers to Dante Adams in Green Bay three weeks ago) and the first 80-yard TD against Seattle since Oct. 4, 1998, when Rich Gannon and Andre Rison hooked up on an 80-yard scoring play for Kansas City.

“This was a tough loss. We were able to put together a ballgame in the second half and I thought a lot of really good things happened. But they did a nice job to get the ball down the field (on the game-winning field goal).” — Seahawks coach Pete Carroll

“We showed what we’re capable of in the second half. They played better than us in the first half. We just didn’t execute. It comes down to us doing the right thing one play at a time.” — Wilson

“To struggle like we did in the first half and come back the way we did in the second half and not win, it’s an emotional roller coaster. This is very draining and exhausting. There is a sense of urgency for our team right now to get our football right. But no panic.” — Baldwin

“We’ve got to play better. It would be nice if we got a first-round bye, but you can only control what you can control. We’ve got to take this to heart and make sure it doesn’t happen again.” — Wagner

“This is not an opportunity lost. You would love to make the road easier, but sometimes you have to take the harder road.” — Seahawks CB Richard Sherman

Arizona leads the overall series 18-17-1 and has defeated Seattle three times in the past four seasons. . . Had the Seahawks won, they would have recorded the fourth undefeated home season in franchise history (2003, 2005, 2012) . . . Hauschka’s 27-yard field goal in the second quarter extended his franchise-record streak  to 18 consecutive games.