Another dubious trial at the one-yard line helps blow another winnable game for the Seahawks, who lost another key player, Tyler Lockett, for the season. Are four good quarters in a row possible for these guys? 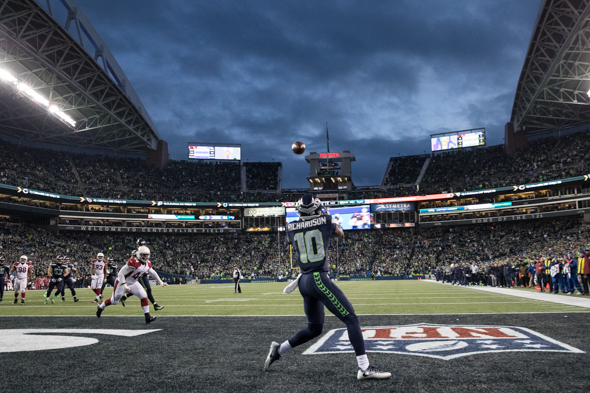 In twilight, wide-open WR Paul Richardson ties the game at 31 with this TD reception at 1:00. / Drew McKenzie, Sportspress Northwest

First, the good news for Seahawks fans: In the 2013 regular season that led to a championship, the Seahawks lost 17-10 to the Cardinals in December.

Now, the bad news. That year, both Seattle and Arizona were very good. No so this year.

Yes, the Seahawks are champions of the lame NFC West, with room to spare. But in losing a howler of contest 34-31 Sunday to the broken-down Cardinals at the Clink, they established that the defense and special teams can be every bit as spasmodically crappy as the maligned offense.

With one regular-season game left against the moribund, 2-13 49ers in San Francisco, all the Seahawks have to do is fix some of everything. The usual domination in December? It has devolved into desperation.

Not to mention heartbreaking. One of the team’s most popular and productive players, WR Tyler Lockett, injured his right leg so grievously that he was bloodied on the spot where he appeared to have scored a touchdown after a splendid reception.

“We were celebrating the touchdown, then I realized he was on the ground,” said QB Russell Wilson. “At first, I thought maybe it was his head because of how he hit the ground. Then I got close to him, and there was blood everywhere near his ankle.”

Surgery is imminent and Lockett is done for the year, Carroll said, but offered no other details. Nor did anyone want to own up to any emotional hangover from the grisly scene. But then the Seahawks had one of their worst sequences of the season immediately after the injury.

Ironically, the circumstance was weirdly similar to the one in the previous game against the Rams that caused CB Richard Sherman to launch a sideline rage against Carroll and assistant coach Darrell Bevell over playcalling, an episode that since grew notorious.

First-and-goal at the one.

Despite all the drama that followed in the second half, it was the final two minutes of the first half where the Seahawks may have lost the valuable No. 2 seed in the playoffs and its first-week bye.

They took four shots and came away with nothing.

RB Thomas Rawls, who didn’t play in the second half because of a shoulder bruise, went over RG Jermaine Ifedi for no gain. Wilson was stuffed on a sneak that had no shot. On third down, Wilson overthrew. And instead of going for a field goal, Bevell dialed up a pass play on fourth down that started with Wilson under center and ended with him on his back, a seven-yard sack by DT Rodney Gunter, who came unblocked despite a seven-man Seattle front.

“We made a big mistake,” Carroll said. “We airballed their defensive tackle.”

Instead of six or three, the Seahawks came away with zero points. Sherman would have been within reason to vent, but chose higher ground.

“That was a fun division game,” he said. “It’s not an opportunity lost. You would like to make the road easier, but sometimes you have to take the harder road.”

Actually, it is an opportunity lost. It’s clear that the Seahawks are operating on a very thin margin for error, so a playoff bye would be useful time to find a way to stretch one or two good quarters into three or four, generally a minimum requirement for playoff success.

Instead, Atlanta (10-5) is sitting in the NFC’s second seed ahead of 9-5-1 Seattle, which defeated the Falcons earlier in the season. But if they beat New Orleans Sunday, the Falcons get the coveted bye even if the Seahawks win. If third-seeded Seattle stays there, it would host the sixth-seeded team. If they fall to fourth, they would host the fifth seed.

But Sunday’s game against the team they tied 6-6 earlier in the season exposed enough cracks that even a win against the woebegone 49ers is no cinch.

On special teams, Stephen Hauschka not only missed the go-ahead PAT with one minute left, he had a field goal blocked. Jon Ryan, returned from a concussion, had a punt blocked.

“I need to do better,” said Hauschka. Not once, not twice, but six times he said the same thing to a group of reporters. Normally a willing explainer, Hauschka uttered no other words, no matter how the questions were asked. His demeanor reflected the tension in the locker room.

On defense, the Seahawks gave up two touchdowns and two field goals in the fourth quarter, including the game-winner at 00:00 from 43 yards by Chandler Catanzaro.

On that drive, they let QB Carson Palmer cover 50 yards in eight plays in one minute. Earlier in the quarter, he managed 75 yards in four plays for a TD that put Arizona up 28-18.

If it wasn’t clear already, FS Earl Thomas, out for the year with a broken leg, is missed like a fish misses water. His replacement, Steven Terrell, isn’t ready for prime time. Hard to blame him, but there’s no choice after he gave up an 80-yard pass play to J.J. Nelson, the season’s longest against Seattle.

“When you give up a post route, you don’t play very well,” Carroll said. “That’s not good enough. It’s pretty fundamental for us.”

Still, the Cards converted only one of nine third downs and averaged 3.2 yards per rush, both easily accepted benchmarks for defensive success. They stats are part of the story that says the Seahawks are not incompetent, just inconsistent. Just like the 297 yards of total offense and four TDs in the second half.

“It was so obvious we could do (well) during the course of the game,” Carroll said. “We can do that for the whole game too.”

That remains to be seen. But it is also true that most of the potential NFC playoff contenders are in various states of disarray too. Even No. 1 Dallas has to decide whether to play or protect their star rookies Dak Prescott and Zeke Elliott.

The Seahawks didn’t get disqualified from the playoffs Sunday. They just became disrespected.

That’s probably something they can work into a mad-on after an airball.