The Seahawks offensive line failed miserably in the first half against Arizona, digging a hole so deep that a furious second-half rally was insufficient. Four shots from the one-yard line drew no points. 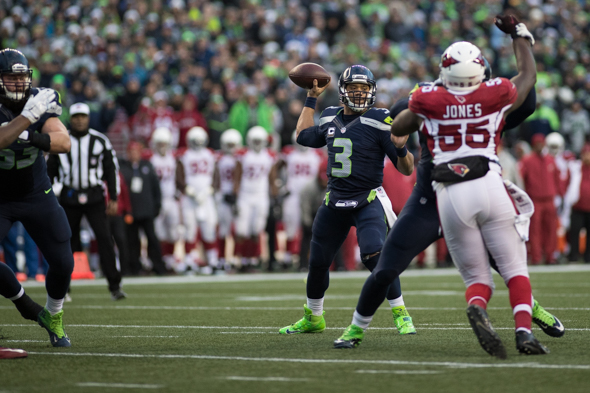 The Arizona Cardinals unwrapped their first Christmas present Saturday afternoon at CenturyLink Field: The backfield of the Seattle Seahawks. Like a toddler with a shiny toy, they broke it: 10 tackles for loss, six sacks and 14 quarterback hits on their way to a 34-31 victory.

The Seahawks’ offensive line was the worst offender. A reshuffle at right tackle during the week sought to provide more protection to QB Russell Wilson and open the ground game. In the first half, neither happened.

The first quarter ended with one negative passing yard and two yards rushing despite six attempts. The first half ended with Wilson sacked five times.

“We didn’t play well from the start,” coach Pete Carroll said. “We had all kinds of problems protecting and running the football. We got nothing done in the first half.”

A big blow was Seattle’s first red-zone failure of the game. After advancing to the Cardinal 20 on a pass-interference call, the Seahawks stalled and sent in kicker Steven Hauschka to attempt a 45-yard field goal. The line broke down again, giving up a block to DT Rodney Gunter.

In the second quarter after two stymied drives, QB Russell Wilson hit WR Tyler Lockett on a deep fade down the left sideline for what was initially ruled a touchdown, then was spotted at the one-yard line after review. As Cardinals DB Brandon Williams pulled down Lockett, his right leg was crushed beneath Williams’ weight, causing a break that will require surgery and end his season.

From first-and-goal at the one, two running plays were stuffed for no gain and a third-down pass fell incomplete.

Whether worried about Hauschka’s miss or a stubborn insistence to cut the 14-0 deficit in half quickly, Carroll kept his offense on the field on fourth down.

Wilson stepped under center Justin Britt in an I-formation. The Seahawks had seven on the line of scrimmage against Arizona’s six. Yet at the snap, LG Mark Glowinski crashed down to the right to help C Justin Britt, while LT George Fant threw a kick-out block to the left.

This left a wide-open lane for Gunter, who rushed in untouched as Wilson retreated. The easy sack turned the ball over on downs.

RT Garry Gilliam said the line failed its objectives in the first half.

“They did everything we expected them to,” Gilliam said. “It was really just one-on-one battles. As an offensive line, we just need to hit our combos and get on the same page. There was nothing spectacular they did. It’s just about us getting out of our own way.”

Trailing 14-3 at halftime, the group pulled itself together.

“You’ve got to just make the adjustments, know what they’re doing,” Glowinski said. “We just got together and made sure that we were focused in. Do the stuff that we do all the time, and not mix stuff up. Do what we’re supposed to do.”

Things improved. Seattle took the opening possession and drove 66 yards in 6:40 to reach the end zone on a two-yard pass to WR Jermaine Kearse.

Of Seattle’s six possessions in the second half, four yielded touchdowns. Carroll was pleased.

“It’s surprising to see how we turned it around, as far off as we were early,” Carroll said. “But that’s what we expected to look like in the third quarter and fourth quarter. It was obviously in us, and that’s why we were disappointed that it didn’t happen throughout the whole game.”

The breakdowns didn’t disappear, however. In the third quarter, Jon Ryan’s punt was deflected after LB Alex Okafor beat TE Brandon Williams in the backfield. In the fourth quarter, the offensive line was unable to buy time on a late drive for Wilson, who threw a ball away on fourth down to avoid a sack.

The second-half improvement forged a remarkable tie at 31 (the PAT was missed left by Hauschka). But the defense failed to deny the Cardinals in their final possession, resulting in the game-winning field goal at 00:00.

The 94 yards of offense in the first half was what will make Christmas Day a little less merry in Puget Sound households. Unless the poor offensive starts get fixed quickly, the New Year will be equally desolate.