4th quarter vs. Cards was worst since SB loss

The Seahawks took some solace Saturday in their second-half rally (28 points) against Arizona, but Seattle’s usually stout defense unraveled a rate rarely seen in club history. 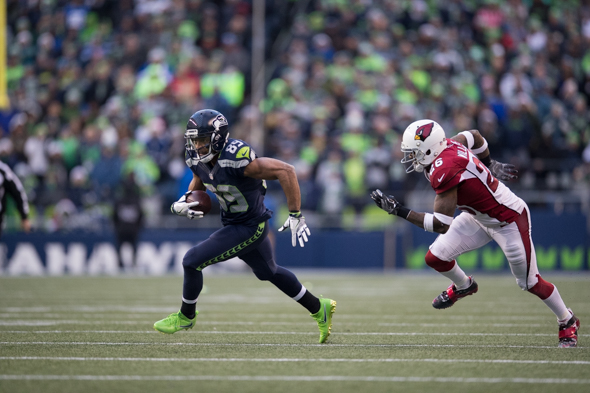 Much of the post-game talk at CenturyLink Field Saturday focused on the Seahawks’ offensive revival in the second half. Trailing 14-3 after producing two of the more horrid quarters in franchise history (five sacks allowed, 0-for-7 from goal-to-go, etc.) Seattle rallied for 28 points, 21 in the fourth quarter, only to lose on a Chandler Catanzaro field goal as time expired.

“We just didn’t look like ourselves in the first half. But we were able to put together a ball game in the second half that gave us a chance,” said coach Pete Carroll. “It was a terrific comeback and it gave us an opportunity to get into the game. We can do that for the whole game. We need to find that.”

Carroll’s sentiments were echoed throughout the team.

QB Russell Wilson: “We had a great second half and it showed the resilience of our football team and what we’re capable of. We played great in the second half, which is exciting.”

WR Doug Baldwin: “We definitely had more confidence in ourselves (in the second half) and executed at a much higher level.”

RT Gary Gilliam: “As long as we have enough time, there is no game that is out of reach for us. There was never a moment in that game where I thought we were out of it.”

CB Richard Sherman: “Our offense made plays in the second half and gave us a chance to win.”

LB Bobby Wagner: “We were down by 10 with however many seconds left and we came back, so I’m never discouraged.”

The Seahawks trailed 31-18 with 4:10 remaining and by a touchdown with a minute left before tying the score 31-31 on Wilson’s fourth touchdown pass. But while the offense came to life, the defense, already having surrendered the longest TD pass of the Carroll era (80 yards from Carson Palmer to J.J. Nelson in the second quarter) fell apart.

Arizona pounded out a nine-play, 65-yard drive to open the fourth that culminated in a David Johnson TD. Then Johnson scored again, capping a four-play drive that occupied only 2:02. Palmer’s final two drives that resulted in Catanzaro field goals took 59 seconds and one minute, respectively. In that combined 1:59, Palmer ran 10 almost perfect plays.

The Seahawks didn’t dwell on the defensive meltdown after their 34-31 loss, but the 20 points they allowed the Cardinals in the fourth quarter were the most in the final period of any game since Super Bowl XLVIII, and tied for the second most in the final quarter of any contest since Carroll became head coach in 2010:

The outcome almost certainly means the Seahawks will not lead the NFL in scoring defense for a record-tying fifth consecutive season.

New England entered its game Saturday against the New York Jets allowing an average of 16.6, two clicks ahead of Seattle’s 16.8. The Patriots bludgeoned the inept Jets 41-3. Seattle ceded 34 to the Cardinals. New England’s defensive scoring average dropped to 15.7 while Seattle’s rose to 17.9.

To overtake the Patriots, and tie the 1953-57 Cleveland Browns’ record of five consecutive seasons leading the league in scoring defense, Seattle would have to throw a shutout at San Francisco Sunday while New England would have to lose by approximately 35-0 to the Miami Dolphins.

Even if the Seahawks had FS Earl Thomas, whose absence was a factor in their implosion Saturday, that gap won’t close. The Patriots score 27.1 points per game and the  Seahawks allowed the 49ers 18 points – 15 in the fourth quarter – Sept. 25 and Thomas played in that game.

Seattle’s defensive fade Saturday created another anomaly: For only the fourth time in 41 years of Seahawks history, they lost a game in which their starting quarterback threw four or more touchdown passes.

It happened twice to the team’s original quarterback, Jim Zorn, during the expansion years, but it didn’t happen again until 2003 when Matt Hasselbeck threw five touchdowns without an interception in an overtime loss at Baltimore.

It happened Sunday when Wilson joined Hasselbeck as the only quarterbacks in club history to throw four or more TDs without a pick and still lose.