Washington has some big, dramatic wins over the years. But there are five games that were major pivot points in the course of program history. Saturday vs. Alabama could be No. 6. 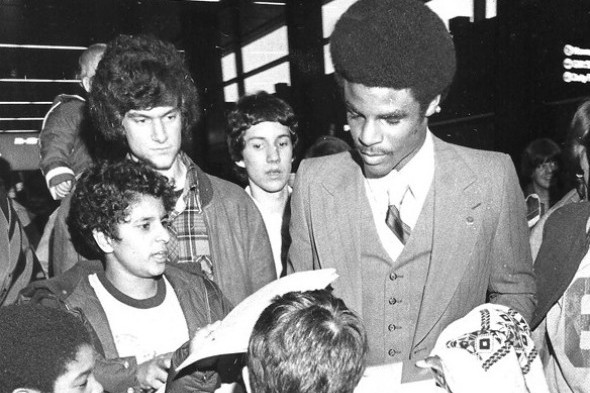 Washington QB Warren Moon won the Sports Star of the Year Award in January of 1978 after leading the Huskies to a program-changing Rose Bowl victory over Michigan. / David Eskenazi Collection

Any list of the biggest wins in University of Washington football history starts with the 1960 Rose Bowl trampling of Wisconsin (44-8), the Huskies’ only victory of national import in the program’s first seven decades. The list of memorables also includes two other Rose Bowl triumphs, both at Michigan’s expense: 1978, which kick-started the Don James program, and 1991, which earned James and UW a share of the national championship.

Three other corkers among many: Washington’s 28-17 upset of No. 2 Oklahoma in the 1985 Orange Bowl – the “Sooner Schooner” game – nearly enabled the Huskies to win the 1984 national title; the 31-0 wipe-out of No. 5 USC in 1990 that left a humbled Trojan QB Todd Marinovich muttering, “All I saw was purple,” and the 1994 “Whammy in Miami” that shattered the Hurricanes’ 58-game home winning streak.

A Saturday win in Atlanta over Alabama in the Peach Bowl, predicted by almost no one, would top those successes. The Crimson Tide is college football’s No. 1 team and the defending national champion. Washington hasn’t defeated a No. 1 since the 1961 Rose, a 17-7 victory over Minnesota, and hasn’t taken down a defending champ since upsetting USC 22-7 in 1963.

Significant in UW history as were the wins that capped those seasons, most were one-offs that had little long-term impact beyond bragging rights. But these pivotal games did:

Although Washington finished 1959 with a 9-1 record and a No. 8 Associated Press ranking, oddsmakers gave the Huskies little chance against No. 6 Wisconsin.  The Badgers were seven-point favorites, due in part to the historic Rose Bowl dominance of Big Ten teams. Also, Washington hadn’t been to Pasadena since 1944, and seemed to be one of those curious interlopers that dropped into town from time to time.

But if Washington gave no inkling history was about to change, the first quarter erased all doubt. QB Don McKeta scored on a six-yard run, RB George Fleming kicked a 36-yard field goal and returned a punt 53 yards for another TD and the rout was on.

Washington’s victory actually had more of a long-term impact on the Pacific Coast Conference than it did on coach Jim Owens’ program, even though the Huskies played in two more Rose Bowls in the following four years.

Before UW’s triumph, considered one of the most shocking outcomes in the history of the game, its only previous taste of Rose Bowl success had come in a 14-14 tie with Navy in 1924. Prior to 1960, Big Ten teams had won 11 of the previous 12 Rose Bowls. But beginning in 1961, when Washington returned to Pasadena and defeated No. 1-ranked Minnesota 17-7, PCC teams won 11 of the next 17 and 33 of 56.

Owens’ first two Rose Bowl teams also laid the groundwork for the PCC to evolve into a pass-heavy conference. Once it did, it dominated the Rose Bowl, going 19-4 between 1970-92 against the ground-oriented Big Ten.

“What Owens did in those two Rose Bowls was one of the unique coaching jobs ever done,” said former Washington State coach Jim Sweeney. “It taught a lot of coaches the value of preparation. No teams were better prepared than those two Rose Bowl teams.”

Attendance dropped from an average of 59,531 during the Sonny Sixkiller years (1970-72) to 42,595 in 1976. Part of the fade had to do with the sudden popularity of the expansion Seattle Seahawks, but part of it was that Washington had not produced a Rose Bowl team since 1964. And 1977 seemed to be devolving into another one of those lost years after setbacks to Mississippi State, Syracuse and Minnesota in the first four games.

“There were some guys that tried to take advantage of the rules and that really distracted our football team,” Moon told sportspressnw.com earlier this year. “The thing that we wanted to accomplish at the beginning of the season was to win the Pac-8 and go to the Rose Bowl. It was right there in front of us, but we had to start that week at Oregon.”

James called a midnight team meeting in the days leading up to the game with the idea of adjusting attitudes. It worked. The Huskies rolled into Eugene and smashed the Ducks 54-0, running 92 plays to Oregon’s 58.

The win not only flipped Washington’s season, it flipped James’ program. Led by Moon, who became Pac-8 Player of the Year, the Huskies largely tore through the rest of their schedule and earned a trip to Pasadena, where they scored a major upset over Michigan with Moon earning the MVP award.

“If we don’t win at Oregon after our slow start, things probably don’t play out nearly as well for us,” James admitted in an interview before his death in 2013. “I don’t even want to think about what would have happened if we hadn’t turned our season around in Oregon. And then winning the Rose Bowl changed everything.”

“That wasn’t a game changer,” said Skip Hall, a UW assistant coach that year. “That was a program changer.”

The Huskies parlayed that Rose Bowl into a recruiting bonanza. The signees formed the nucleus of teams that played in a Sun, two Rose and two Aloha Bowls between 1979-83, years in which even eight wins didn’t guarantee a bowl.

Prior to this loss, Washington had won 10 games in a season four times in the previous decade, averaging 8.5 wins over that span. James amassed that record by owning the Northwest in recruiting, which he supplemented with a major star or two every year out of California, and pulling off victories against more talented clubs by winning special teams and turnover battles.

But in Alabama, James encountered a foe he couldn’t out-coach: Superior team speed. Alabama’s athletes, including DE Cornelius Bennett and RB Bobby Humphrey, were faster at nearly every position, leaving the Huskies incapable of competing. That convinced James he needed to recruit a different kind of athlete if he was going to expand upon what he had built.

“I still remember Bennett lining up on one side and coming clear to the other side to chase down our tailback,” said Hall.

“It was after our bowl game against Alabama that we started recruiting speed specifically,” said former head coach Jim Lambright, defensive coordinator for that game against the Tide. “When we broke down the film, there was no way our personnel matched their personnel as far as speed. So we went out after that to specifically recruit faster people. We weren’t selective enough, up to that point, with speed.”

The course change didn’t manifest itself until 1989, after Washington had been reduced to buying its way into the 1987 Independence Bowl in order to keep its postseason streak alive, and going bowl-less in 1988 with a 6-5 record.

Then the Huskies acquired the speed they needed – players such as CB Dana Hall, DT Steve Emtman, WR Orlando McKay and RB Napoleon Kaufman among them — and brought in coach Keith Gilbertson from Idaho to remake the offense. Five years after the Sun Bowl humiliation, Washington shared the national championship with Miami.

After Washington demoralized its fan base by going 0-12 in 2008, the school responded by hiring 34-year-old Steve Sarkisian, an offensive assistant at USC, as its new head coach, replacing Tyrone Willingham. Even with the energy Sarkisian, who had never been a head coach at any level, brought to the program, the chances UW could quickly resurrect itself from 0-12 seemed remote.

Seven teams before the 2008 Huskies went 0-12 or worse (Army 0-13 in 2003) and only one – Hawaii in 1998 – posted a winning record the following season. It took the others an average of five years each to reach .500 and one, Southern Methodist, took more than a decade to recover from a winless year.

But Sarkisian launched UW’s revival in his third game against a No. 3-ranked USC team that entered Husky Stadium as a three-touchdown favorite to hand Washington its 16th consecutive conference loss, extending an abysmal league record.

After the Trojans tied it 13-13 with four minutes remaining, Washington faced third-and-15 with 3:03 left. QB Jake Locker hit WR Jermaine Kearse for 21 yards and found him again for 19. After a roughing-the-passer penalty against USC, PK Erik Folk won it with a 33-yard field goal with three clicks left.

A purple party that stretched from goal line to goal line followed. USC head coach Pete Carroll, four months away from becoming coach of the Seahawks, was forced to weave his way through the happy mob in to congratulate his former assistant.

The win was Washington’s first over a ranked team from a BCS conference since 2003 (Washington State). USC was also the highest-ranked team UW defeated at home since upending another No. 3 USC team 13-3 Nov. 14, 1981.

Sarkisian’s 2009 Huskies won only five of 12 games, but that represented a major rebound from 0-12. Between 2010-13, Sarkisian’s teams played in four consecutive bowl games, marking the fastest rebuild from 0-12 in NCAA history. It provided Sarkisian’s successor, Chris Petersen, a far better base from which to launch his program than the dismal one Sarkisian inherited from Willingham.

Between 2004-15, Oregon defeated Washington 12 consecutive times, the longest stretch of dominance by one school over the other in the 113-year history of the rivalry. During the streak, not only did UW fail to beat the Ducks with quarterbacks Isaiah Stanback, Carl Bonnell, Jake Locker, Ronnie Fouch, Keith Price, Cyler Miles and Jake Browning, it rarely came close.

Oregon outscored Washington 507-221 during the 12-year run, an average margin of victory of 42-18. The Ducks tallied 40 or more points eight times, including 50 or more three times. Five UW head coaches took cracks at beating Oregon, to no avail.

The degree to which Oregon had come to dominate the Northwest, always Washington’s realm under James: Following a win in 2003, UW went 65 consecutive weeks over 5½ years without an AP national ranking.

It also went 111 weeks without a ranking higher than No. 22. Over the same period, the Ducks held a national ranking 146 times, including eight weeks at No. 1, and twice played for the national championship. UW hadn’t played anything much bigger than the Fight Hunger Bowl.

Washington did not beat a great Oregon team in October, nor did it even defeat a particularly good one. But its 70-21 rout of the Ducks, at Eugene, with Browning throwing six touchdowns and running for two more, ended one of the darkest streaks in program history.

More than anything, it represented a full buy-in by players of Petersen’s program – just as the 1977 UW rout of Oregon represented a program changer for James. It also represented a neat bit of symmetry: Program-altering wins for both James and Petersen came at Oregon’s expense.