Let’s be honest. Nick Saban and the Crimson Tide are Steinbrenner and the Yankees. Nobody outside Alabama likes them. That means that the world will be full of Huskies fans. At least, for a weekend. 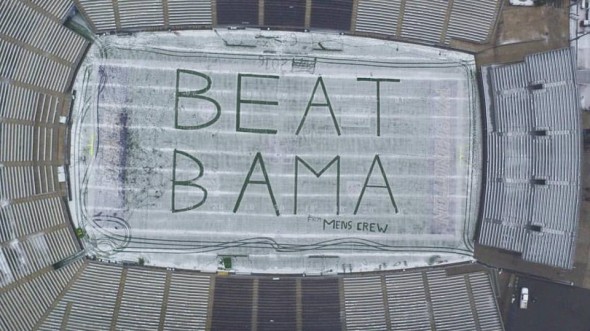 During a recent snowfall, the University of Washington’s men’s crew took to Husky Stadium to make a frosty statement about the Peach Bowl national semifinal. / Washington athletics

Aside from those making the 200-mile drive between Tuscaloosa and Atlanta, everyone in the American sports world is a Washington Huskies football fan this weekend.

Everyone. Because no one outside Alabama likes the Crimson Tide. Respect? Yes. Like? No.

As they lay in the champagne, nachos and the vomit bags for the evening’s parties, millions of unaffiliated fans are going to tune in ESPN on New Year’s Eve afternoon for the national semifinal in Atlanta and will say, “Who’re the guys against Nick Saban? Huskies? I’m in.”

Alabama and Saban are the Yankees and Steinbrenner. The Tide is the Soviet national hockey team. From a police lineup including The Joker, Mr. Burns, Sauron, Voldemort, Henry F. Potter, Snidely Whiplash and Dean Wormer, scared victims will point to Saban and scream, “It’s him! He’s the guy!”

America loves the Huskies. True, most viewers know them only as underDawgs to Alabama. It is enough. Hey, it’s New Year’s Eve. Nobody’s looking for a permanent relationship.

In 1995, when Ken Griffey Jr. slid across home plate at the Kingdome with the winning run to win the third game in a row after an 0-2 start to claim the American League Division Series from the New York Yankees, a friend of mine working in the ESPN newsroom said everyone in the place simultaneously jumped off their seats and way off the carpet.

For many, it will be the one time in 2016 when good triumphs over evil. Even the Chicago Cubs, as historic as was their World Series triumph, couldn’t claim such moral high ground because their foe, the Cleveland Indians, had a slobbering narrative nearly as woeful.

Saban is the only guy behind the counter at the DMV wondering why you no longer look like your old driver’s license picture. He’s the proctologist who snaps on the latex gloves and giggles. He’s the guy at the next table ordering a little too loudly fava beans with his chianti.

Petersen, on the other hand, is Forrest Gump with a side of Eddie Haskell. Just when you think he’s so earnest he might be a goober, he pops a Statue-of-Liberty double pass on fourth-and-eight, leaving the foe looking for his pants. He’s the shy kid who works up the courage to tell a joke at the holiday dinner, and even though the joke falls flat, he draws courtesy laughter from the old ladies because he’s so cute they want to pinch his cheek.

They call Petersen The Bishop. They call Saban Satan.

If  Warner Brothers can’t make an animated series out of this matchup, take an Acme Anvil and step off a cliff, Wile E.

Alabama is a 14-point favorite, a huge disparity for a near-championship event. Most everyone is hoping Petersen works another ingenious upset in the fashion of the 2007 Fiesta Bowl win over Oklahoma. If such a thing exists as the Hall of Immortal College Bowl Games, that game would be right there at the top of the altar.

Petersen coaxed a 43-42 win out of Boise State over the Sooners in such a preposterous fashion that Sports Illustrated recently published a worthy oral history of the game, linked here.

But Oklahoma, the Big 12 champ at 11-2, was only a seven-point favorite over the 12-0 Western Athletic Conference Broncos. The win wasn’t as other-worldly as our memories have made it. The trick-play heroics have embellished the recall.

The imagery tends to diminish what Petersen has going for him. To explain it, Seahawks CB Jeron Johnson was consulted.

He played under Petersen at Boise State from 2007, the year after the Fiesta Bowl, to 2010, when he became the WAC’s fifth-leading career tackler as a three-year starter. He signed as an undrafted free agent with the Seahawks and was with Seattle for four seasons, mostly on special teams. After stints in Washington and Kansas City, he returned to the Seahawks Dec. 6 after FS Earl Thomas’s broken leg ended his season.

Was he surprised to see Washington’s abrupt success after three years with Petersen?

“Not coach Pete,” he said, grinning in the Seahawks locker room recently. “I tried to tell  (ex-Huskies star Jermaine) Kearse and other guys to just give him some time.

“We did a lot of winning. Coach Pete is a great motivator. He truly cares about you. He wants you to do well on and off the field. When I was there, we had seven or eight Academic All-Americans. He’s big on that. He wants you to graduate and do well.”

Is there something special about his methodology?

“Play good fundamental football, be true to your technique and assignment,” Johnson said. “That’s the only way you can do your job. We were winning, so you wanted to buy in and believe what he was saying.

“He’s a great coach. I’m glad he gave me the opportunity. I’m grateful for it.”

What does that mean for Saturday’s Peach Bowl collision of the cartoon stereotypes?

Not that much. Even with the sports world abloom with ardor for the Huskies, Alabama has too many NFL draft choices at too many positions: Crimson Tide, 23-16.

But what Johnson talked about bodes well for the Huskies’ future, including Jan. 7, 2018 in Levi’s Stadium at Santa Clara — the rematch between The Bishop and Satan for the national title.